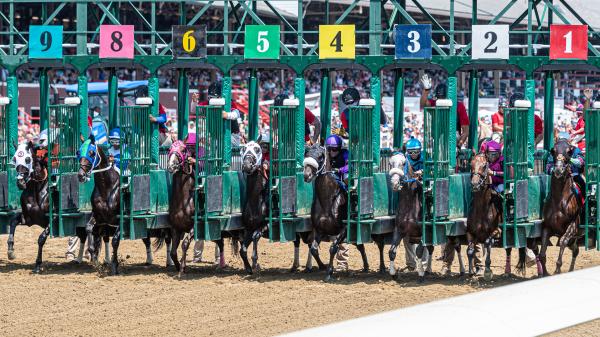 We’re just a few days into 2022, and anticipation is already building for what’s to come this year. There’s sure to be plenty of exciting races, memorable moments, and great times to be had this year at tracks all across the country.

Everyone makes New Year’s resolutions; some are more successful than others. Here are some for racing fans to keep this year.

1. Watch the Showdown between Knicks Go and Life Is Good in the Pegasus World Cup

On Jan. 29, some of the country’s top dirt horses will gather at Gulfstream Park near Miami, Fla., for the Pegasus World Cup Invitational. The race looms as a clash between two exciting horses. Knicks Go is the defending Pegasus champ and recent winner of the Longines Breeders’ Cup Classic. This will be his final start before starting his career as a stallion at Taylor Made Stallions. Life Is Good was one of the top Kentucky Derby prospects last year before being sidelined by injury, and he has since bounced back with some impressive wins. Most recently, he won the Big Ass Fans Breeders’ Cup Dirt Mile by 5 ¾ lengths.

2. Pick the Winner of the Kentucky Derby

Racing’s greatest tradition, the Kentucky Derby Presented by Woodford Reserve, will take place on May 7 at Churchill Downs in Louisville. For the next four months, the “Derby Trail” will be in full swing, as the country’s top 3-year-olds try to earn their place in the starting gate through a series of qualifying races. Check out the Derby prep schedule here, and be sure to follow all the Derby trail action on America’s Best Racing.

3. Check Out Both Saratoga and Del Mar

For racing fans, summer means following the action at Saratoga Race Course and Del Mar. Saratoga, located in the picturesque town of Saratoga Springs, N.Y., is among the country’s oldest tracks. They’ve been racing there since the mid-1860s. Meanwhile, Del Mar is just a few furlongs away from the Pacific Ocean, which inspired its nickname, “Where the Turf Meets the Surf.” While the atmospheres are very different, both tracks offer top-quality racing and are both worth a trip for any racing fan.

4. Win Lots of Money at the Betting Windows

Every horseplayer dreams of making a life-changing score. Wagers such as the Pick 5, where bettors try to select five consecutive winners, often pay thousands of dollars to anyone savvy or lucky enough to cash. On Aug. 12 at Saratoga, the late Pick 5 paid more than $161,000 to a handful of winning bettors. Every day, there’s plenty of chances to make a big score of your own: check out our gambling section for top plays each week and general handicapping advice.

5. Travel to Keeneland and explore Lexington

For a few weeks in April and a few more in October, the focus of the racing world turns to Keeneland, located in the Thoroughbred capital of the world, Lexington, Ky. A trip to Keeneland can be combined with one of the many other attractions in Lexington. They include the Kentucky Horse Park, the Woodford Reserve distillery, and some of the country’s top stallion farms, including Claiborne Farm. This year’s Breeders’ Cup World Championships will take place at Keeneland on Nov. 4-5.

StableDuel is a daily fantasy sports-style game for racing, in which players select their stable of 10 horses on a given race card and earn points based on their horse’s performance. There are games every day, with big-money contests almost every weekend offering thousands in prize money. StableDuel is a great way to get a lot of action for not a lot of money.

Many farms give fans the opportunity to meet the horses who live on the property. Old Friends, a retirement organization with three locations between New York and Kentucky, features many former stars between their properties, and offers tours year-round. There are few cooler experiences in racing than getting up close and personal with one of your favorite horses from the past. Many stallion farms also offer tours of their grounds and give fans a chance to see the stallion barns where tomorrow’s champions are produced.

Have you ever wondered what goes on at a track’s backstretch stable area before the races? Several tracks, such as Saratoga, Keeneland, and Churchill Downs, offer tours of the backstretch in the morning, often coupled with watching morning workouts. This gives fans the chance to learn what goes into a horse’s morning routine. Taking one of these tours can be a very insightful experience.

9. Meet a Celebrity at the Kentucky Derby

There’s never a shortage of celebrities at the Derby, as people from all corners of the entertainment world descend on Churchill Downs to enjoy the Derby experience. Through Derby Experiences, the official ticket package service of the Derby, fans have the chance to attend meet-and-greets with some big names. The roster of attending celebrities is usually announced in early spring.

10. Bring Friends to the Track

A day at the track is fun under any circumstances, but sharing the experience with friends and family makes it even better. There’s nothing like the thrill of cheering home a group ticket, or taking a new fan to the paddock to get up close and personal with the horses for the first time. The best way to show a new fan just how great racing is is to let them see it in person. Once they’ve taken their first trip, it’s unlikely it’ll be their last.

2022-01-11
Previous Post: Diamond Link Mighty Sevens from Greentube • This Week in Gambling
Next Post: Pratyush Buddiga Talks Through The Swings of Life and Poker