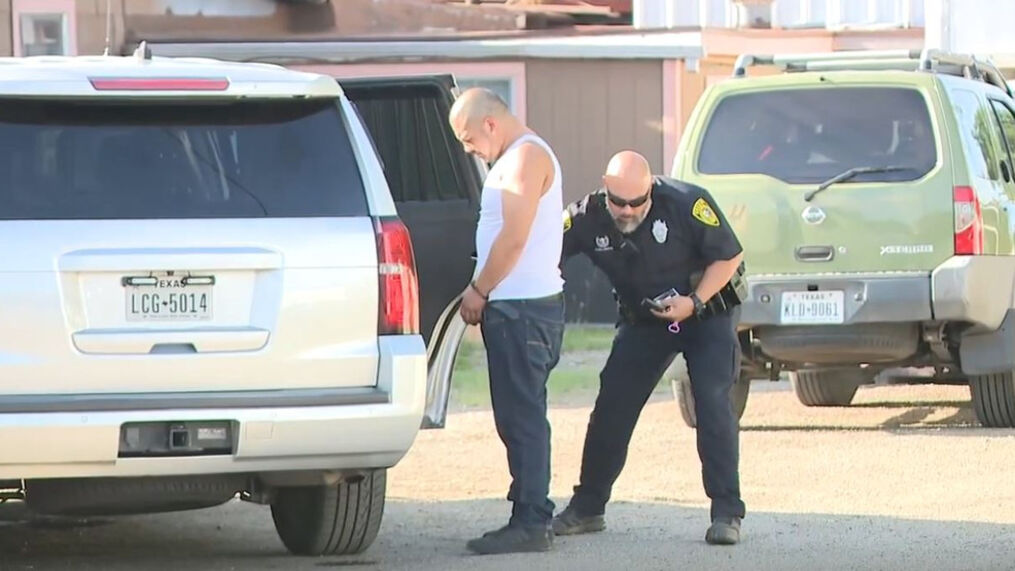 Tens of thousands of dollars and an estimated 100 eight-liner gaming machines were commandeered by sheriff’s deputies after a gambling raid in San Antonio, Texas. The court-ordered search took place last Friday around sunrise.

One of three men arrested in a San Antonio, Texas gambling raid. It took place in the city’s South Side. (Image: SBG San Antonio)

The illicit gambling den was housed on a parcel in the city’s South Side. Various buildings and sheds were connected to hold the gaming operation, Bexar County Sheriff Javier Salazar explained during a press conference at the crime scene.

I would consider this a resounding success,” Salazar told the media. Four suspects were apprehended.

Three men were in custody following the search. They likely will be charged with gambling offenses, Salazar added.

One was in charge of security, while another ran gambling operations, Salazar said.

A fourth suspect, a woman, was charged with possession of Methamphetamine (meth), the sheriff added. Their identities were not immediately released.

At least two weapons were seized. No one was injured during the raid.

The gambling complex has been in operation for 10 years.

It’s pretty well known in the area,” Salazar said about the operation. “So, thankfully, we were able to get in and get it shut down.”

The Bexar County Sheriff’s Office used a SWAT team to ram through a gate to enter the South Side complex.

Bags containing cash also were found on Friday. One bag held about $15,000. Some of the money was stored in an ATM and safe.

The local fire department also showed up to break into the storage devices, so police could seize the cash.

Firefighters used Jaws of Life and other specialized “heavy-duty tools” to open the devices, authorities revealed. Typically, the Jaws of Life is used to cut through cars or open vehicle doors following an accident when a motorist remains trapped.

Some of the money seized by deputies at the illegal gamlng operation. Over $15,000 was located there. (Image: SBG San Antonio)

Some of the gaming machines found Friday appeared to be in use. Others may have just been stored on the property.

Many times, eight-liner machines are used in gaming operations found in the county.

Basically, an eight-liner resembles a slot machine. Depending on the type, a player “wins” if a horizontal, vertical, or a diagonal row of objects line up.

The 20,000 to 30,000 square-foot site was also suspected as a location for human trafficking and illegal drug dealing, according to Salazar.

Some 29 people were apprehended after the raid. Of those, eight were arrested and placed in jail on various offenses.

The offenses ranged from outstanding warrants, ID theft, and violation of a protective order. Additional charges against those detained could include organized crime charges, Salazar said.

Those arrested included men and women. All were from the San Antonio area.

It is unclear how the prior cases were adjudicated in court.