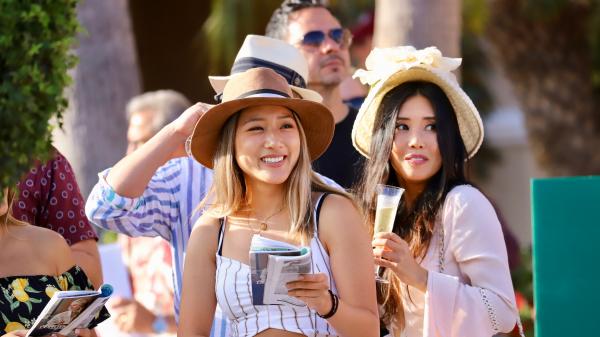 The countdown to the Triple Crown is officially on, and if you haven’t watched the trio of races in the past, prepare to get FOMO after learning 11 reasons why you always should.

As a quick background, the Triple Crown series is comprised of three races, each with a different length and location within the span of five weeks. Open to 3-year-old Thoroughbreds only, the Triple Crown series showcases the most elite horses in the country via the Kentucky Derby Presented by Woodford Reserve, Preakness Stakes, and Belmont Stakes Presented by NYRA Bets. While only 13 horses have captured the elusive title of Triple Crown champion, there’s so much more to watch the series for than just the hopes of crowning another champion. Let’s get into it!

The Triple Crown races all take place on a Saturday afternoon in the spring, providing the perfect excuse to (repeatedly) celebrate with friends. Rotate between friends’ houses to throw a Kentucky Derby party, Preakness party and Belmont Stakes party!

2. The perfect charcuterie board *moment*

A Super Bowl party could never … move over, pizza and hot wings! The past two years have brought a few fundamental truths to light, one of which being the serotonin hit a quality charcuterie board delivers. The run for the roses is your time to nail the salami rose trend!

Each race of the Triple Crown features a distinctly different – but equally delectable – bourbon cocktail. The Mint Julep, Black-Eyed Susan, and Belmont Jewel are certainly worth a try, but if bourbon isn’t your favorite, no shade. Here are some refreshing spring and summertime favorites to inspire the perfect cheers boomerang for you and your friends on race day.

You never know who you’re going to see at the Triple Crown races. Past attendees include Tom Brady, Kim Kardashian, Jeff Bezos, Tyler Cameron, Kacey Musgraves, Guy Fieri, and even Queen Elizabeth II. Until now, you probably thought there was no way to possibly connect the King of Flavortown with the Queen of England, but horse racing just has a way of bringing unlikely celebrities together.

6. Test your luck and win big

Long before the Super Bowl, March Madness, or Bachelor brackets existed to place bets on, people were putting their money on fast horses. Betting is simple and accessible to anyone with a mobile device – no sketchy bookies necessary. Check out the basics of betting on horse racing to get your bearings, learn where to bet, and subsequently flex on your friends at Derby parties.

If you have a limited attention span or struggle to stay interested in sports games that take three hours, you’ve come to the right place! As soon as you hear “and they’re off!” you’ll know the outcome two suspenseful minutes later.

9. Get emotional about the backstories of the horses and their connections

Contrary to the wealth and opulence commonly associated with horse racing, compelling underdog stories can be found in every corner of the sport. Tune into NBC’s primetime broadcasts to learn the backstories of the horses, jockeys, owners, and trainers vying for a life-changing win.

10. Support one of the only professional coed sports

Horse racing is one of the few sports where all genders compete on equal terms. In 1970, Diane Crump became the first female jockey to compete in the Kentucky Derby, and 23 years later Julie Krone became the first woman to win a Triple Crown race when she captured the Belmont Stakes.

11. #GirlPower applies to the horses, too

So save the date, send the party invites & enjoy everything that comprises “the most exciting two minutes in sports” this spring!