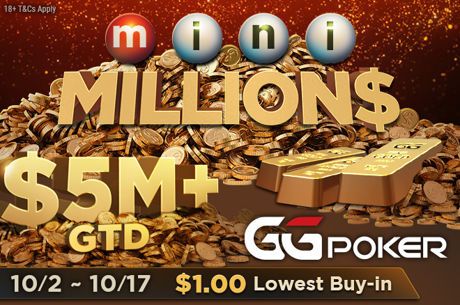 Mystery Bounty tournaments are all the rage right now, but most have commanded large buy-ins that are out of reach of most poker players. That is no longer the case because GGPoker included a mystery bounty event to its mini MILLION$ schedule, and it is the series’ must-play tournament.

The mini MILLION$ Mystery Bounty Main Event is a fantastic tournament that opens the door to the wonderfully exciting world of mystery bounty tournaments to the masses. GGPoker made its buy-in an affordable $10.50 yet slapped a massive $1 million guarantee on the prize pool! Some $500,000 of that sum is reserved for the mystery bounty element of the tournament.

It is an ambitious guarantee, even with dozens of Day 1s, but GGPoker loves to push the boundaries when it comes to making huge prize pools for its players.

Massive Prizes for Small Buy-ins in the GGPoker Mini MILLION$ From Oct. 2

Buy into any of the numerous Day 1s for $10.50, or as little as $1.05 if you win your way in via one of the many satellites running around the clock, and you will find yourself armed for the battle with 10,000 chips. Blinds start at 50/100/12a and increase every eight minutes. Late registration remains open until the end of the tenth level; unlimited re-entries are permitted until late registration slams shut.

Each Day 1 concludes once the 16th level of the flight is done and dusted. You want to do everything in your power to reach this stage because it not only means that you progress to the final day’s action at 7:30 p.m. BST on October 17, but also means you are now in with a shot of securing a mystery bounty payment.

How Does the mini MILLION$ Mystery Bounty Work?

The mini MILLION$ plays like a traditional no-limit hold’em poker tournament on each Day 1 before becoming even more exciting on the final day’s action. Eliminating an opponent on the final day rewards you with a mystery bounty. As the name suggests, the amount you receive is random, a mystery, but it will be a slice of a guaranteed $500,000 prize pool. The exact number of mystery bounties and their size will be confirmed before the final day shuffles up and deals, but our friends at GGPoker informed us that the top mystery bounty prize will be in the region of $50,000!

Now is the time to join GGPoker if you do not already have an account. Download GGPoker via PokerNews, create your account, and make your first deposit knowing GGPoker matches your initial deposit 100% up to a maximum of $600.

The bonus releases into your playable account balance in $1 increments each time you contribute $5 in net cash game rake or pay in tournament fees. You have a full 90 days to release as much of the bonus as possible.

In addition, new depositing players can get involved in the Honeymoon promotion. The promotion revolves around completing daily challenges. Completing just three see you win a prize. Complete all 30 and you will have received $170 worth of cash and $180 in other rewards on top of your $600 welcome bonus!