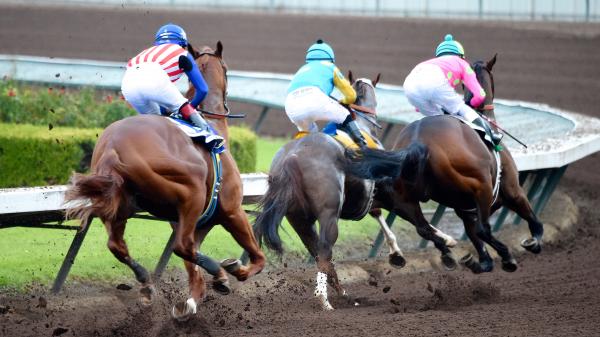 2021 Los Alamitos Futurity at a Glance

This year will mark the 41st edition of the Los Alamitos Futurity, a race previously known as the Hollywood Futurity and the CashCall Futurity that has been won by some of the top California 2-year-olds over the last four decades-plus.

Names like Best Pal, A.P. Indy, Real Quiet, and Point Given and more recently important sire Into Mischief and champion Shared Belief populate an impressive list of past winners.

The Los Alamitos Futurity is a qualifying race on the Road to the 2022 Kentucky Derby Presented by Woodford Reserve, awarding the top four finishers qualifying points with 10 going to the winner, four to the runner-up, two points for third, and one point for fourth.

Trainer Bob Baffert has won the last seven editions of this race and a record 13 overall. Baffert is not eligible to run a horse in the 2022 Kentucky Derby, but he does have two formidable starters in this race. Given his past success, Baffert’s entrants are a logical starting point when searching for the winner of this race, even though they will not earn qualifying points for the 2022 Kentucky Derby.

1. Olympic Legend (15-1 morning-line odds): He broke his maiden on this track but has disappointed against stakes competition since then. He lost by nearly 10 lengths here in a 6 ½-furlong stakes and seems overmatched in this field.

2. Durante (9-2): Won impressively after finishing second by a half-length to Baffert’s Barossa in October. He’s taken steps forward in each of his three starts and, with the prospect of continued improvement here, he cannot be ignored.

3. Messier (1-2): The better of the two Baffert entrants, he’s won his last two starts by a combined margin of 10 lengths. He won a Grade 3 stakes at a mile easily last time and is definitely the one to beat here.

4. Barossa (5-1): After beating Durante, he was no factor in the TVG Breeders’ Cup Juvenile Presented by Thoroughbred Aftercare Alliance. The competition is easier here and, if he can duplicate that maiden win, he’ll be a main contender.

5. Slow Down Andy (5-1): He’s a California-bred with two good efforts to his credit. He was a game second last time out at seven furlongs in good time and has the breeding to handle the added distance. He’ll need to step up to catch Messier, but he’s surely in the mix for second.

2021-12-12
Previous Post: The Polish Eagle is a dark horse
Next Post: Cait Huble Rejoins the NCPG as Director of Communications