Kevin Gerhart continued his strong run by claiming his second bracelet this festival and fourth overall after winning Event #62: $1,500 Pot-Limit Omaha Hi-Lo 8 or Better for $186,789.

Four events are still in play highlighted by Eli Elezra leading the final five players in Event #60: $50,000 Poker Players Championship to place him in prime position for his hunt for his fifth WSOP bracelet. 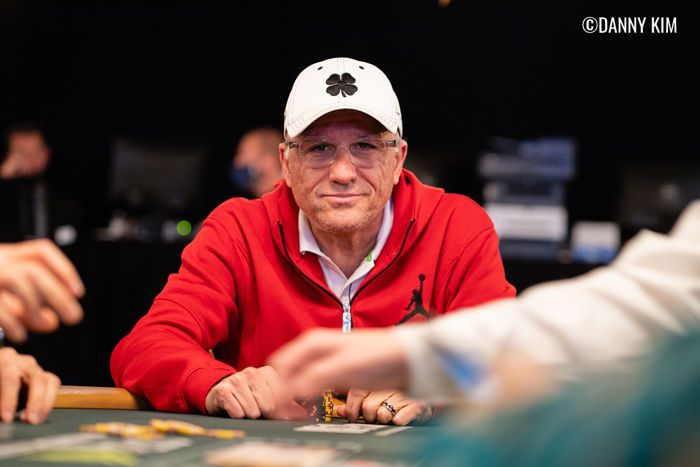 Eli Elezra leads the final group of five into the finale of Event #60: $50,000 Poker Players Championship at the 2021 World Series of Poker. The final five survived a field of 63 players over four days to play for a top prize of $954,020 and the prestigious Chip Reese Trophy.

Elezra is followed by Paul Volpe, Chris Brewer, Dan Cates, and Ryan Leng after starting Day 4 with 10 players and playing down to a final table of five that will be streamed on delay Friday at 3 p.m. on PokerGO.

The day started with ten players spread across two tables and went to nine within an hour when Mike Wattel hit the rail in No-Limit 2-7 Single Draw when he turned over a ten-eight and was drawing dead to Volpe’s ten-six.

Daniel Negreanu came short in his bid for the Chip Reese trophy, finishing in ninth place after Leng made a set of jacks in Pot-Limit Omaha to defeat Negreanu’s pair of aces. Nick Schulman followed soon behind in eighth place when his queens and eights ran into Brewer’s straight in Limit Hold’em.

The final seven players moved to a final table and played for more than four hours before Matt Glantz hit the rail in seventh place on a counterfeit two-pair during a wild four-way Omaha Hi-Lo hand that saw Leng and Elezra split the pot. 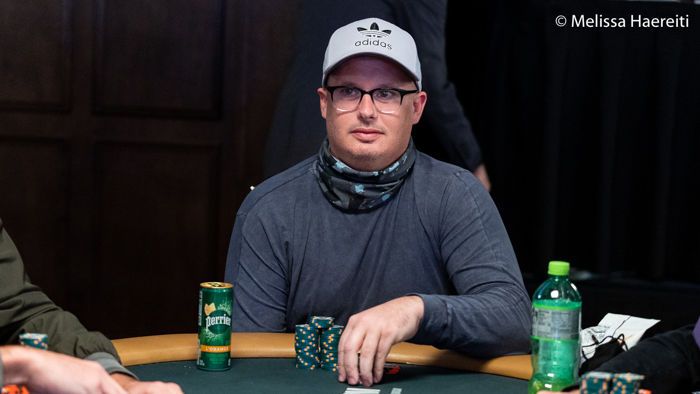 Players will return on Friday for a final table that will be streamed on delay at 3 p.m. on PokerGO. Action will continue in Level 23 and the final five will play down to a winner.

Check out all of the $50K PPC updates 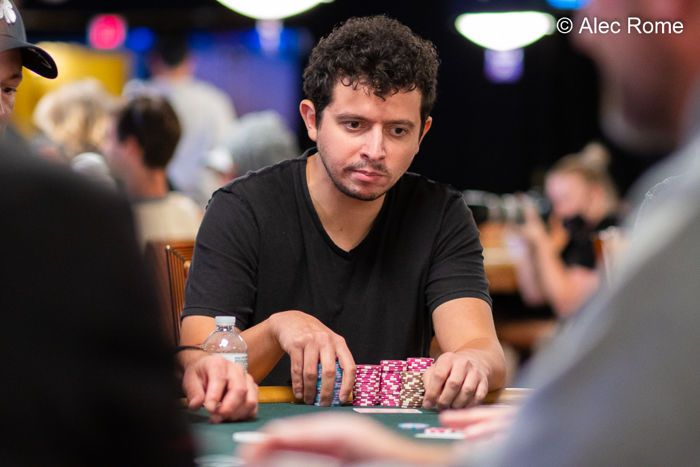 Leading the pack of the nine remaining as the night came to a close was Ohio’s Bradley Rogoff with 8,800,000 in chips. Rogoff gathered a large stack toward the middle part of the day and remained among the chip leaders before re-gaining the pole position in the final level of the night. The chip leader has little poker resume to speak of thus far and will be looking to make a big splash in this event.

Eric Zhang (7,175,000) had a roller-coaster day that ended on a high to place him in second place heading into the final table. He was very nearly out the door with a few tables remaining but hit runner-runner straight to crack a flopped set. From there he rode the momentum to a large stack until he was again whittled down to just a “lone ember” of a stack as he put it just before the final table. But he was again able to spin it back to finish the day in a strong position.

Guy Hadas finished third in chips, some distance behind with 5,500,000. He was a large stack for much of the day and coasted to the end after taking out several players.

Two-time WSOP Circuit Ring winner Mitch Garshofsky finished the day fourth in chips with 4,475,000. Garshofsky was the short stack close to the end of the night before spinning it up in the last level. He has amassed over $600,000 in career WSOP earnings so far and will be want to add the elusive bracelet to his poker collection.

Fifth in chips at the end was Christopher Corbo with 4,275,000. He held the chip lead late in the night but dropped a few preflop all-ins to sink to the middle of the chip counts before the bell rang for the night.

Play resumes Thursday at 12 p.m. noon local time and PokerNews will again pick up the coverage as a new WSOP Bracelet winner will be crowned.

Check out all of the $500 Salute to Warriors updates 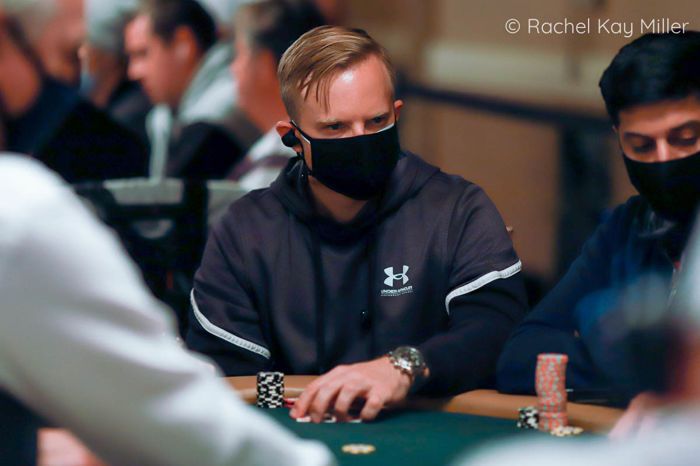 The real World Series of Poker Main Event starts on Thursday, but the tune-up — Event #65: $1,000 Mini Main Event — kicked off at 11 a.m. PT Wednesday, and the Day 1 session, which lasted over 14 hours, was action-packed.

Players flocked to the Rio All-Suites Hotel & Casino to compete for a bracelet. Within a few 30-minute levels, both the Pavilion and Brasilia rooms were packed full of Mini Main Event competitors. In total, 3,821 players registered for the freezeout, including a number of high-profile players such as Tony Dunst, Shaun Deeb, and Joe McKeehen, all of whom failed to advance to Day 2, which will take place on Thursday.

Martin Jacobson, the 2014 world champion, however, bagged 1,200,000 at the end of Day 1 and seeks to become a Main Event and Mini Main Event champion.

None of those players could match the stack of Thomas Boyden, who bagged 3,375,000 in chips to enter Day 2 as the chip leader. Giorgiy Skhulukhiya (3,150,000) also went home with more than 3 million.

When play concluded at just after 1 a.m. PT, 282 players remained and will come back on Thursday at noon. PokerNews will again be on hand all day live reporting the action. Play will resume on Level 23 with the blinds at 20,000/40,000 with a 40,000 big blind ante. The tournament is scheduled to play down to the final five with the final table set for Friday.

Check out all of the Mini Main Event updates 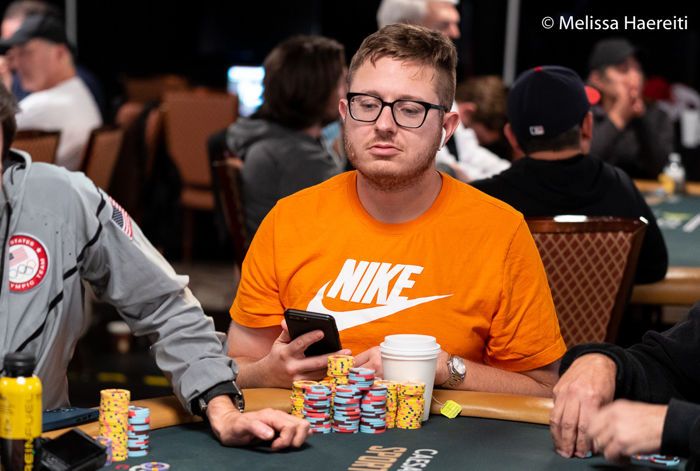 Brian Hastings finished the day with the largest stack of 447,000 chips as he looks to grab hold of his fifth World Series of Poker gold bracelet. Hastings entered the field halfway through the day but wasted little time in building a stack. Once he did so, he found himself involved in a massive three-way pot where he rivered the nut-high hand along with the nut-low hand. A pot-sized river bet got paid off by Yueqi Zhu who once held the early lead and Hastings vaulted to the top of the leaderboard.

Hastings’ previous WSOP wins came in 2012, two of them in 2015, and 2018 but he has yet to claim a victory in the game of Omaha. Hastings came so close in this very same event the last time it was held in 2019, finishing second to Nick Schulman. This all-around poker pro has accumulated nearly $4 million in career live tournament earnings and will be hoping to build on that number by the end of the week.

Some other big stacks moving on to Day 2 include Tommy Chen (377,500), PLO specialist Esther Taylor (240,0000), Chip Jett (308,500), and Felipe Ramos (282,500). This championship field attracted many big names and bracelet winners including the defending champion Schulman. It wasn’t a profitable day for Schulman who only managed to put 29,500 chips in his bag but he will be returning tomorrow.

It wasn’t meant to be for everyone as nearly half the field was sent to the rial on the opening day. It was a short-lived time on the felt for the likes of Daniel Negreanu, Mike Matusow, David Williams, and Dario Sammartino who will not be returning for Day 2.

Late registration for this event will remain open until the start of play on Day 2 with each new entry getting a starting stack of 60,000 chips. The action will resume at 2 p.m. local time with the blinds on level 11 at 1,000/2,500 and a 2,500 big blind ante. Another 10 levels will be on the schedule for tomorrow with a winner being crowned on Day 4.

Check out all of the $10K PLO8 updates