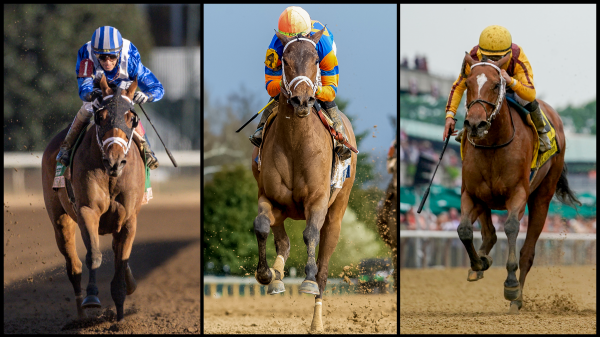 2022 Breeders’ Cup Distaff Cheat Sheet: Get to Know the Horses

Some of the country’s top fillies and mares will square off Nov. 5 at Keeneland Race Course in the $2 million, Grade 1 Longines Breeders’ Cup Distaff. Headlined by an elite duo from the barn of Hall of Fame trainer Todd Pletcher, 3-year-old filly Nest and 4-year-old Malathaat, a powerful cast will travel 1 ⅛ miles on dirt in their quest to become Breeders’ Cup champions.

Get up to $200 in Bonus Cash when you sign up and bet the Breeders’ Cup World Championship with 1/ST BET! Visit 1st.com/bet/cheatsheet and use promo code 200ABR to start earning your $200 Bonus. Once you have signed up and start betting, you’ll start earning your $200 Sign-Up Bonus. That way, once you get to know the horses in this handy Cheat Sheet, you can stop by 1st.com/bet/cheatsheet and place your bets on Friday, Nov. 4, and Saturday, Nov. 5. Plus, you can take advantage of 1/ST BET’s other promotions at 1st.com/bet/promotions. So, no matter what horse you pick, your best bet is with 1/ST BET.

Whether you are interested in making a couple of bucks on the race or just want to know a little bit about this year’s runners, we’ve got you covered with our 2022 Breeders’ Cup Distaff Cheat Sheet Presented by 1/ST BET. Check back Monday, Oct. 31, after final entries are announced, for an updated Cheat Sheet with contenders listed in post-position order and with morning-line odds added.

Let’s take a look at this year’s Distaff field.

Notable achievements and interesting facts: Awake at Midnyte was on the Longines Kentucky Oaks trail earlier this season. A third-place finish in the Rachel Alexandra Stakes Presented by Fasig-Tipton followed by a distant fourth in the Central Bank Ashland Stakes led her to be rerouted to the Eight Belles Stakes presented by TwinSpires on the Oaks undercard, and she finished 21 lengths behind winner Matareya. Given an extended freshening after that race, the Nyquist filly returned a more confident and mature racehorse, winning an allowance optional claiming race by 3 ½ lengths at Del Mar in September before a runner-up finish against older fillies and mares in the Grade 2 Zenyatta Stakes Oct. 2 at Santa Anita Park. Awake at Midnyte has never, however, faced the quality of competition she will tackle in the Breeders’ Cup Distaff and would need to improve by leaps and bounds just to factor in the trifecta. She very likely will be the longest price on the board and even a minor award would be a major victory for Awake at Midnyte and her connections.

Bet Awake at Midnyte in the Breeders’ Cup Distaff

Pedigree: Equal Stripes – Blues for Sale, by Not for Sale

Notable achievements and interesting facts: There is a very good chance, given the depth of talent at the top in the Distaff, that Blue Stripe will be one of the longest shots on the tote board when the starting gates open. That’s pretty appealing for a 5-year-old race mare who has finished outside the top three only once in 10 career starts and has been flat-out terrific this year in three races. She won the Grade 2 Santa Margarita Stakes in April and then ran second in the Grade 2 Santa Maria Stakes in June before rolling to a decisive win over a quality field in the Grade 1 Clement L. Hirsch Stakes Aug. 6 at Del Mar. A Group 1 winner in her native Argentina, Blue Stripe finished seventh at 53.30-1 in the 2021 Breeders’ Cup Distaff, but she is a significantly better racehorse right now and could really spice up the exacta or trifecta at a big price. Her half-sister (same dam [mother], different sire [father]) Blue Prize won the Distaff in 2019 and paid $19.80 for a $2 win bet.

Notable achievements and interesting facts: Clairiere announced her presence with authority in this division in June and July when she beat Malathaat in back-to-back starts, winning the Grade 1 Ogden Phipps Stakes by a head and the Grade 2 Shuvee Stakes by 1 ½ lengths. Clairiere was favored against Malathaat, who beat her twice in 2021, in the Personal Ensign Stakes in August at Saratoga but finished a disappointing fifth, beaten by 9 ½ lengths by her familiar foe. That race, however, was really the only poor race of her career as she has finished in the top three in 12 of 15 races and was fourth by three lengths in the 2021 Longines Kentucky Oaks and fourth by a half-length in the 2021 Distaff. I expect she will be a fairly popular selection to upset the two probable favorites (Nest and Malathaat) given she beat Malathaat on the square twice this summer and she is undoubtedly capable of winning this race at her best. A fast pace, which does not look especially likely, would aid her chances for Hall of Fame trainer Steve Asmussen, who won this race in 2014 with Untapable. Another bay filly by Curlin – her pedigree is very similar to Nest and Malathaat – Clairiere is out of multiple Grade 1 winner Cavorting, by Bernardini (a champion son of A.P. Indy).

Notable achievements and interesting facts: Malathaat won the 2021 Longines Kentucky Oaks and ran third by a half-length in the Distaff a year ago during her 3-year-old campaign, and the bay Curlin filly has maintained that superior form as a 4-year-old in 2022. Malathaat has three wins and two seconds in five races this season and enters the Distaff off back-to-back Grade 1 wins in the Personal Ensign Stakes in August at Saratoga and the Juddmonte Spinster Stakes Oct. 9 at Keeneland. She earned a career-top 113 Equibase Speed Figure in the Personal Ensign, and the Spinster was little more than a paid workout as she rolled to a 5 ¼-length runaway. Like stablemate Nest, Malathaat is by Hall of Famer Curlin out of a stakes winning A.P. Indy mare. Malathaat’s dam (mother) is Grade 1 winner Dreaming of Julia, who was produced by multiple Grade 1 winner Dream Rush. Malathaat was right in the mix in deep stretch in the 2021 Distaff, and she is a prime win candidate again in 2022 coming into the race on a roll. Trainer Todd Pletcher and jockey John Velazquez teamed to win the Distaff in 2004 with Ashado. Pletcher also won the Distaff in 2015 with Stopchargingmaria and Velazquez guided Forever Unbridled to victory in 2017.

Notable achievements and interesting facts: Nest won four of her first five starts and was the favorite for the 2022 Longines Kentucky Oaks in May after an 8 ¼-length romp in the $600,000 Central Bank Ashland Stakes. She finished second to Secret Oath in the Kentucky Oaks but five weeks later confirmed her status as an elite talent when running second against males in the Belmont Stakes Presented by NYRA Bets. Nest has been dominant in three subsequent starts, winning the Grade 1 Coaching Club American Oaks, Grade 1 Alabama Stakes, and Grade 2 Beldame Stakes against older females by margins ranging from 4 ¼ to 12 ¼ lengths. Nest is a fast and talented filly by two-time Horse of the Year Curlin out of the stakes-winning and multiple stakes-producing A.P. Indy mare Marion Ravenwood. She almost certainly will vie for favoritism with stablemate Malathaat in the Distaff, giving Hall of Fame trainer Todd Pletcher a potent one-two punch for a race he previously won with Ashado in 2004 and Stopchargingmaria in 2015. Three-year-old fillies have won four of the last 11 editions of this race.

Notable achievements and interesting facts: Never out of the top three in 11 career starts, Search Results has faced several of the key Distaff contenders previously, finishing second to Malathaat in  the 2021 Longines Kentucky Oaks and second to that rival most recently in the Grade 1 Personal Ensign Stakes in August, when she earned a career-best 112 Equibase Speed Figure after taking the lead in the stretch and coming up a half-length short. Search Results also finished second to Clairiere back in June in the Grade 1 Ogden Phipps Stakes. With a pair of graded stakes wins this season and a track record of running well against elite competition, Search Results should be considered a major player in the Distaff, especially for exacta and trifecta bets. She has run three of the best races of her career at 1 1/8 miles and will be well-rested with 10 weeks since her last start for four-time Eclipse Award-winning trainer Chad Brown.

Notable achievements and interesting facts: Five months ago, Secret Oath won the Longines Kentucky Oaks – five weeks after finishing third against males in the Arkansas Derby – to improve to 3-for-4 on the year with a strong claim to being the best 3-year-old filly in the U.S. Fast-forward to fall, and the momentum has fallen away after a fourth-place finish in the Preakness Stakes. Secret Oath was second to Nest but beaten by 12 ¼ lengths and 4 ¼ lengths, respectively, in the Coaching Club American Oaks and Alabama Stakes. Most recently, she was third in the Grade 1 Cotillion Stakes, 7 ¾ lengths behind winner and fellow Distaff contender Society. Hall of Fame trainer D. Wayne Lukas has through the years gotten myriad horses turned around or peaking just in time for the Breeders’ Cup – think Take Charge Brandi (2014 Juvenile Fillies), Cat Thief (1999 Classic), Is It True (1988 Juvenile), and Gulch (1988 Sprint) – and he has his work cut out for him here. But Secret Oath is a talented filly with plenty of upside and she should be great value on the tote board for the first time this year. I’m not sure she is fast enough to win, so it would take more than a little of that old Lukas magic. It also would almost certainly require her to run the race of her life. Lukas has won the Distaff four times among 20 Breeders’ Cup wins with Life’s Magic (1985), Lady’s Secret (1986), Sacahuista (1987), and Spain (2000).

Notable achievements and interesting facts: Society has run only one bad race in her six-start career, and she had an obvious excuse in that race. A confirmed front-runner, Society stumbled at the start and was bumped before she was rushed to the front in the Grade 1 Coaching Club American Oaks July 23 at Saratoga Race Course, where she faded badly late to finish fourth, beaten by 17 ¾ lengths by Nest. The talented 3-year-old filly from the first crop of 2017 Horse of the Year Gun Runner has won each of her other five races and enters the Distaff off back-to-back runaway victories in the Grade 3 Charles Town Oaks in August and Grade 1 Cotillion Stakes at Parx Racing Sept. 24. Society was obviously well beaten by Next in the aforementioned CCA Oaks and has not yet faced older fillies and mares, but if you are willing to forgive one troubled unplaced finish, she looks awfully good. Her 111 Equibase Speed Figure for winning the Cotillion places her right there with the top contenders and there is not a ton of speed lined up for this race. She could set the tempo and be very tough to pass late for trainer Steve Asmussen, who won this race in 2014 with 3-year-old Untapable. Jockey Florent Geroux won the Distaff twice on Monomoy Girt (2018, 2020).