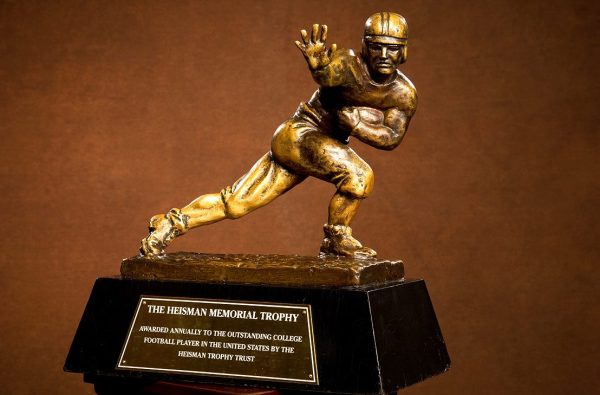 The potential for a repeat Heisman Trophy winner is there in 2022 as Alabama QB Bryce Young returns as the Crimson Tide’s starter. His team is the overall favorite to win this year’s national title, but he is not the favorite to win a second consecutive Heisman Trophy. That actually makes sense since there has been only one repeat winner in the history of the award.

This year’s favorites should come as no surprise. Quarterbacks dominate the board. The last non-quarterback to win the Heisman was Alabama RB Derrick Henry in 2015. Henry and fellow Crimson Tide RB Mark Ingram are the only two non-QB Heisman Trophy winners since 2005.

History could be made in 2022. Young could win a second consecutive award. There could be a non-quarterback come in and take the award. Anything is possible. Here are the 2022 Heisman Trophy favorites.

Despite last year’s win, Young is not the overall favorite to win the 2022 Heisman Trophy. You have to go back to the 1970s to find Ohio State RB Archie Griffin who is the only player to ever win consecutive Heisman Trophies. There have been opportunities to win two in a row. Jameis Winston and Lamar Jackson are two fairly recent examples. Neither repeated and that is one of the reasons why he is not listed at the top of the betting board.

Stroud leads all contenders at +200 odds

That spot would belong to Ohio State QB C.J. Stroud. The Buckeyes signal-caller is coming off an outstanding season of his own. He threw for 4,435 yards and 44 touchdowns. He capped off his first season as the starter with a record-setting – 37-for-46, 573 yards, 6 TDs – performance in the Rose Bowl.

Stroud sits atop the board at +200 to win. Young follows at +350. What Young will not have in 2022 is receivers Jameson Williams and John Metchie III. Last season when those two were on the field, Young averaged 8.7 yards per drop-back. When the two receivers were off the field, that number dropped to 6.4. Alabama has no returning receivers with more than 250 yards receiving last season.

Transfer Williams is +800 to win the Heisman

In his last four games, Williams’ completion rate dropped to 57 percent. His average completion yardage went down and his QB rating fell to 133.2. That poor play at the end of the 2021 season is why Williams is not listed at better than +800 to win this year’s Heisman.

There are no other players given better than Williams’ +800 odds. Bijan Robinson, the Texas RB, is next at +1600 at online sportsbooks. Robinson (6-0, 221) ran for 1,127 yards and 11 touchdowns last season. He will have a new QB in transfer Quinn Ewers and he will be a focal point of the Longhorns offense. Under head coach Steve Sarkisian, the Texas offense has been one of the best in the country. If Robinson gains some big numbers, you never know.

The Best of the Rest

Robinson’s new teammate Ewers is actually given +2000 odds to win this year’s Heisman Trophy. He is one of four players listed at +2000. TreVeyon Henderson, the Ohio State RB, had better numbers – 1,248 yards, 15 TDs – than Robinson last year. Clemson QB D.J. Uiagalelei started slowly last year in his first year as the Tigers starter. He should be better in 2022. Anthony Richardson takes over sole possession of the starting quarterback job at Florida. He should thrive in new Gators head coach Billy Napier’s offense.