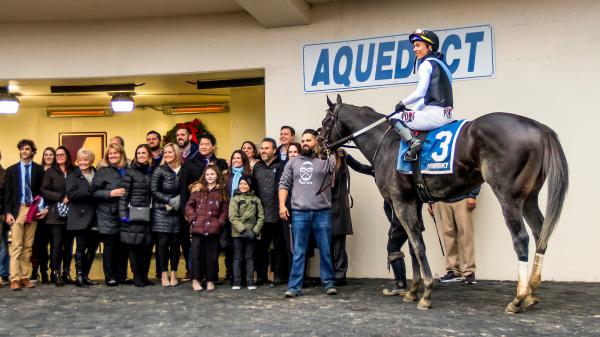 2022 Jerome Stakes at a Glance

The New York stretch of the Road to the Kentucky Derby kicks off on New Year’s Day at Aqueduct with the Jerome Stakes offering eight newly turned 3-year-olds the opportunity to pick up a few qualifying points, which could come in handy should those runners still have Triple Crown aspirations in the spring.

A total of 17 points will be at stake, with the top four finishers getting 10-4-2-1 points in descending order. This year’s 2022 (kinda odd writing that, right?) edition of the stakes will be its 152nd and it has some illustrious winners, but the vast majority of them hail from the days when the stakes was a much-respected test for 3-year-olds in the fall at Belmont Park.

1. Cooke Creek (5-2 morning-line odds): This will be his third straight race at a mile, so the distance will not faze him. He was a good second to a Bob Baffert runner in the Nashua Stakes last time out and after a brief freshening, if he can duplicate that effort here, it should be enough to propel him into the winner’s circle.

2. Unbridled Bomber (8-1): One of four newcomers to stakes competition, he broke his maiden in his fourth try. He’s taken a step forward in each of his starts and while this is an ambitious jump from the maiden ranks, continued improvement could make him a factor here.

3. Ohtwoohthreefive (7-2): On turf, he’d be a heavy favorite. But in his dirt debut he’s a question mark. As a son of Union Rags, he should handle the main track, but his dam is by Galileo, which shouts turf. Given that he should attract considerable attention at the betting windows, the risk/reward ratio seems weak for a horse trying dirt for the first time.

4. Rumble Strip Ron (30-1): He’s the most experienced entrant with eight starts, but two of them were in claimers. He’s held his own against fellow Ohio-breds but this seems too steep of a hill for him to climb.

5. Smarten Up (12-1): Exploded for a nine-length maiden win at Parx Racing last time, but the time was slow. He’s never been worse than third in three career starts and his effort two starts back fits right in with most of these. There’s certainly reasons to like him.

6. Courvoisier (5-1): A well-bred son of the champion filly Take Charge Brandi, he moved forward after two good second-place finishes and finally broke his maiden in his fourth try. He was victorious at a mile-and-an-eighth, so he’s tested at a distance of ground like this. He seems poised for a big effort here with a top jockey in Jose Ortiz.

7. Mr Jefferson (9-2): Was fourth in the Grade 2 Remsen Stakes, beaten by 10 lengths, but had an excuse while racing wide from post eight. His previous start was a nice allowance win at Laurel Park, which paints an optimistic picture of his chances here. His trainer, Michael Trombetta, won this race in 2020, so he has the right connections.

8. Hagler (4-1): There’s not a lot of speed in the race, so that generates some intrigue for this fleet 3-year-old. Breaking from the outside post should not be an issue with a long run to the turn, but he’s yet to travel beyond seven furlongs and that could haunt him in the stretch. If the track turns out to be favoring speed Saturday, that could work in his favor.