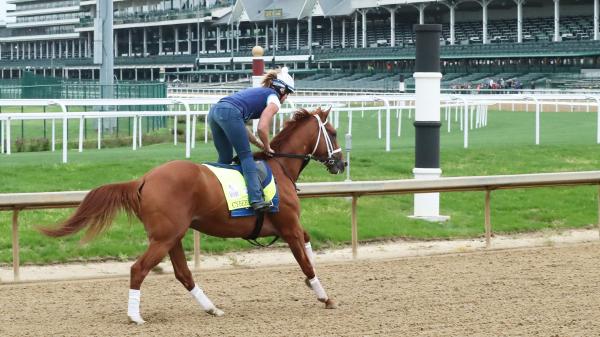 2022 Kentucky Derby at a Glance

Finally, the big day is at hand. After all the prep races, workouts, ups and downs, golden rails, and miserable trips, the first Saturday in May is at hand and 20 of the best 3-year-olds in the nation will be squaring off in the Kentucky Derby Presented by Woodford Reserve. If you still haven’t settled on your pick for the 148th edition, don’t fret. You’re hardly alone. The upcoming edition is as evenly matched as they come and there are only a handful of horses who can be considered tossouts. That, of course, is good news for value seekers who should find nice payoffs in all of the pools, even if they land on the favorites. Hopefully the rain clouds will stay way, putting everything in place for another memorable Derby Day in Louisville.

1. Mo Donegal (10-1): The Wood Memorial Stakes Presented by Resorts World Casino winner has the kind of running style that bodes well for his ability to handle the 1 1/4-mile distance. The problem is the rail. The new 20-horse starting gate is better than the old, two-gate set-up. However, last year Known Agenda, an Irad-Pletcher horse like Mo Donegal, drew the rail and was shuffled back in the early stages. As much as Mo Donegal is a top contender, the draw did not help his cause.

2. Happy Jack (30-1): Not really sure about what he’s happy about. He’s lost by double digits lengths in his last three starts and is definitely one of the few tossouts.

3. Epicenter (7-2): He’s coming into the Derby in outstanding form. He was a decisive winner of the Risen Star Stakes Presented by Lamarque Ford and the Twinspires.com Louisiana Derby and has extended his speed over a 1 3/16-mile distance. He’s had plenty of rest and should be able to work out a good trip right behind the early leader. He beat the morning-line favorite, Zandon, in the Risen Star, though that one had a troubled trip. Hard to picture him being anything worse than the second choice.

4. Summer Is Tomorrow (30-1): The UAE Derby Sponsored by Mubadala runner-up seems a cut below the main contenders but he could have a big say on the outcome as the early pacesetter. The early fractions should hold the key to the closers’ chances in the stretch and he promises to be a key player in that scenario.

5. Smile Happy (20-1): A good example of the value you’ll find in a 20-horse field. He was the beaten favorite in the Risen Star and the Toyota Blue Grass Stakes, finishing second each time, beaten less than three lengths on each occasion. He’s a stakes winner at Churchill Downs and it would not be shocking if he works his way into the exotics.

6. Messier (8-1): He’s the first of two Tim Yakteen trainees and his path to Churchill Downs mirrors the route of the last two 3-year-olds to cross the finish line first. All of them were second in the Runhappy Santa Anita Derby. The Santa Anita Derby was his first start in two months and he should move forward off it. This colt has too much talent to ignore.

8. Charge It (20-1): It takes plenty of talent to finish second in the Curlin Florida Derby Presented by Hill ‘n’ Dale Farms at Xalapa in your third start, but it’s fair to wonder if he’s seasoned enough to handle a field this deep and contentious in his fourth start. He’s in the right hands but this could be a tough assignment for an inexperienced runner.

9. Tiz the Bomb (30-1): Move this race to a synthetic Tapeta surface and he’d be the favorite. But on a natural dirt course he appears to be at a big disadvantage.

10. Zandon (3-1): He’s a deserving favorite as he bounced back from the third in the Risen Star, when he hopped at the start, with a powerful win in the Blue Grass. His works since then have been sensational, which created the steam to make him the betting choice. The main concern is that trouble seems to find him at some stage of the race and that might be hard to overcome in a 20-horse field.

11. Pioneer of Medina (30-1): He was third in the Louisiana Derby after pressing the pace, which is promising, but without a stakes win to his credit, he’s another longshot here.

12. Taiba (12-1): The other Yakteen trainee has even less experience than Charge It. He won the Runhappy Santa Anita Derby in his second career start, which reflects a tremendous amount of talent. It also reveals a great amount of inexperience, which coupled with some spotty works in preparation for Saturday’s race races some question marks that diminish his appeal.

13. Simplification (20-1): He certainly has consistency on his side as he’s been no worse than third in all six starts since his career debut. He did win the Fasig-Tipton Fountain of Youth Stakes and then was third and second behind White Abarrio in the Florida Derby and the Holy Bull Stakes. You can’t toss him out, especially if you’re betting trifectas, but others look better for the win spot.

14. Barber Road (30-1): He should be closing in the stretch but that’s not the kind of move that wins this race. Someone might work out a great trip and wind up in the winner’s circle and it could be him, but his speed figures seem a cut below the rest.

15. White Abarrio (10-1): He’s looked great at Gulfstream Park, winning the Holy Bull and the Florida Derby.  Yet that’s the key element in his past performances. He’s 4-for-4 at the Florida track but was third in the Kentucky Jockey Club Stakes at Churchill Downs, six lengths behind Smile Happy. Since this race in Louisville, not Hallandale Beach, we’ll take a defensive stand against him.

16. Cyberknife (20-1): Trainer Brad Cox won the 2021 Kentucky Derby earlier this year after Medina Spirit was disqualified. He has three chances to win it in a more conventional manner here and this appears to be his best shot. Everything came together with a victory in the Arkansas Derby and he’s been training brilliantly since then. From all indications, he’s ready for another big effort here.

17. Classic Causeway (30-1): He was a leading Triple Crown contender until he finished 11th in the Florida Derby. In response, he was pulled from consideration for the Derby, only to re-enter the picture. He probably should have stayed on the sidelines.

18. Tawny Port (30-1): He won the Stonestreet Lexington Stakes as an acid test on dirt for Cox, but since that was only a Grade 3 stakes, this seems too rough of a spot from this post.

19. Zozos (20-1): Cox’s third starter was second to Epicenter in the Louisiana Derby, making him an intriguing longshot possibility. He’s inexperienced with just three starts but has the kind of talent that would make him a solid play from a better post.

20. Ethereal Road (30-1): While some horses in this field have run three times or less in their career, he started twice in April. Neither of them were impressive so we’ll pass on him even with the legendary D. Wayne Lukas at the helm.

2022-05-07
Previous Post: Fist Fight at Hustler Casino Ends with Poker Player Tased by Security
Next Post: History and Stone Age among my big chances at Leopardstown on Sunday