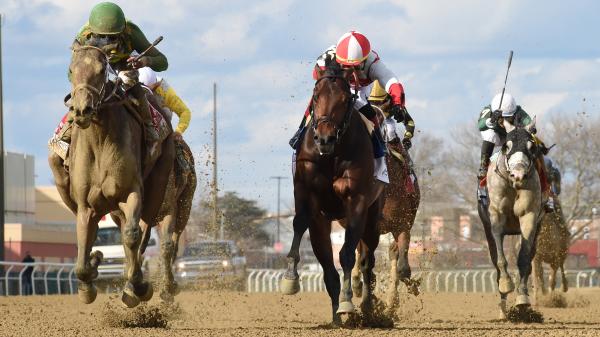 Another year, another Road to the Kentucky Derby in the books! Spring is here, the 148th running of the Grade 1 Kentucky Derby Presented by Woodford Reserve is barely more than two weeks away, and we’re ready to decipher some deep data to find the next run for the roses victor.

The Kentucky Derby is a handicapping challenge unlike any other. It’s the only race in North America where bettors must choose between 20 lightly raced 3-year-old Thoroughbreds racing 1 1/4 miles, a distance few (if any) have tackled in the past.

Thanks to the large field size and unpredictable nature of the horses involved, the Kentucky Derby annually ranks among the best betting races of the year, so handicappers understandably spend an inordinate amount of time analyzing the contenders. Race replays, speed figures, and workouts all receive their share of attention, but less obvious data points come into play as well. One factor many handicappers choose to emphasize is how fast each Derby contender ran the last three-eighths of a mile of their final prep race, which usually (but not always) takes place at 1 1/8 miles.

Longtime turf writer Jennie Rees — an inductee in the National Museum of Racing and Hall of Fame’s Joe Hirsch Media Roll of Honor — was the first to popularize this approach to handicapping the Kentucky Derby, outlining the standard by which fast finishes are judged.

Rees noted a strong finish entails sprinting the final three-eighths of a mile in :38 seconds or less and the final eighth of a mile in :13 seconds or less. However, the final three-eighths fraction alone has been a terrific indicator of a win-worthy Derby contender. Year after year, the :38-or-less rule has proven effective for identifying horses with a chance to prevail at Churchill Downs, with eight of the last 10 Kentucky Derby winners (and 18 of the last 24) finishing their final prep race in less than :38 seconds.

*Please note: Although the status of Medina Spirit’s Kentucky Derby victory is under dispute due to a positive post-race drug test, a disqualification will not affect the betting payoffs from race day. Therefore, Medina Spirit remains the winner for betting purposes. Since betting the Derby is our focus today, we have included Medina Spirit’s data accordingly.

Of course, finishing fractions can be affected by a variety of factors, including the speed of the racetrack and the early pace of the race — it’s easier to finish fast if you’ve gone very slow early on. But when you have a statistic that applies to 18 of the last 24 Derby winners (with two others missing the :38-or-less cutoff by 0.16 or less), you don’t ask too many questions.

So, let’s get started! Below is a chart listing the finishing times for the 2022 Kentucky Derby contenders, ranked in order of how fast they sprinted the final three-eighths of a mile of their final prep. Before diving into the data, here are a few things to keep in mind:

There’s a lot of data to digest here, but we have to begin by highlighting the incredible closing fractions posted by Mo Donegal when winning the Grade 2 Wood Memorial Stakes Presented by Resorts World Casino. A tremendous rally from last place allowed Mo Donegal to gain 4 1/2 lengths through the final three-eighths of a mile and prevail by a neck over Early Voting.

This was an impressive effort visually, and it’s even more stunning by the numbers. If the clock is to be believed (and two different timing systems recorded almost exactly the same results), Mo Donegal sprinted the final three furlongs in :35.61 (fastest on our chart by 0.73 seconds) and his final furlong in :11.97 (fastest by 0.29).

Let us reiterate: this is almost unprecedented. We have tracked the closing fractions for every Kentucky Derby starter since 2016, and no one has come close to matching Mo Donegal’s fraction for the final three furlongs. The second-fastest time we have on record is the :35.96 clocking posted by Maximum Security when winning the 2019 Grade 1 Florida Derby, and it’s significant to note Maximum Security went on to cross the finish line first in the Kentucky Derby (he was ultimately disqualified for causing interference).

The track at Aqueduct was playing fast on the day of the Wood Memorial, as evidenced by the blazing final time of 1:47.86, which ranks as the fastest Wood Memorial since 2005. But even taking the speed of the track into account, Mo Donegal’s finish is freaky fast — he actually ran the final three furlongs 0.81 faster than runner-up Early Voting, not an easy feat considering how well Early Voting ran in defeat. All told, it’s hard to view Mo Donegal’s Wood Memorial performance in anything less than a positive light.

Other horses who produced impressive closing fractions on the Road to the Kentucky Derby include Epicenter and Taiba. Epicenter ranks second on our chart after running the final three furlongs of the 1 3/16-mile Grade 2 Twinspires.com Louisiana Derby in an excellent :36.34. This would be quick enough to top the chart in many years, so Epicenter rates a strong chance to complete the first Louisiana Derby-Kentucky Derby double since Grindstone in 1996.

As for Taiba, he came home a bit slower in his Grade 1 Runhappy Santa Anita Derby victory, running the final three furlongs in :37.40. But considering how slow the track at Santa Anita has played in recent years, Taiba’s finishing fractions are actually excellent. Remember, the last two horses to cross the Kentucky Derby finish line in first place were Medina Spirit and Authentic, Santa Anita Derby runners-up who came home in the much slower times of 38.95 and 38.97.

On the other end of the spectrum, the Grade 1 Arkansas Derby and Grade 1 Curlin Florida Derby Presented by Hill ‘n’ Dale Farms at Xalapa produced less inspiring finishing fractions. Cyberknife was a decisive winner of the Arkansas Derby, but he ran the final three furlongs in a modest :39.18. White Abarrio finished even slower in the Florida Derby, coming home in :39.66 after settling behind a hot early pace. Cyberknife and White Abarrio are both talented and accomplished colts, but the way they finished their final prep runs is a sign that they — and the other Arkansas Derby and Florida Derby starters — might be vulnerable on the first Saturday in May.

But our main takeaway from all this data is undoubtedly the blazing finish of Mo Donegal in the Wood Memorial, because coming home in :35.61 is practically unheard of in a 1 1/8-mile Kentucky Derby prep race. Mo Donegal is unlikely to start as the favorite at Churchill Downs; he might even go off at double-digit odds. But our closing fractions data suggests he’s a serious threat to win the race, with Epicenter and Taiba among his key rivals.

2022-04-24
Previous Post: Plans for Sports Betting in California Convoluted • This Week in Gambling
Next Post: Hope for a Glorious Romance