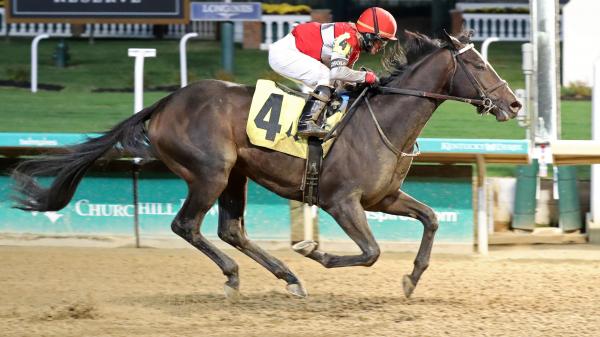 Racing Résumé: Well-beaten in his first three starts sprinting, Call Me Midnight showed improvement when stretching out to 1 1/16 miles for his fourth race in October 2021 at Keeneland, running second to Giant Game. That runner-up finish was flattered when Giant Game finished third in his next race in the TVG Breeders’ Cup Juvenile Presented by TAA.

Call Me Midnight earned a breakthrough first career win Nov. 13 at Churchill Downs, where he closed from off the pace with a final quarter-mile in 24.91 seconds, according to Trakus data, to win by 3 ¾ lengths.

Returning on short rest two weeks later with a new rider, Call Me Midnight made a strong, and perhaps premature, middle move but flattened out and faded to finish seventh in the Kentucky Jockey Club Stakes.

He also broke from the far outside post in an 11-horse field and raced wide throughout in the Kentucky Jockey Club. It’s easy to point those things out in hindsight but more difficult to identify them before a stunning upset victory at 28.50-1 odds in his 3-year-old bow in the Grade 3 Lecomte Stakes last weekend at Fair Grounds.

James Graham, who was aboard for his first win, returned to the saddle for the Lecomte and gave him an absolutely perfect ride. Call Me Midnight was reserved more than 10 lengths off the pace in the early going and really not asked to accelerate until he was angled wide near the top of the long Fair Grounds stretch. From there, Call Me Midnight reeled in six horses one by one until he caught 8-5 second betting choice Epicenter in the closing strides to win by a head in a thrilling finish.

Speed Figures: While there were reasons for optimism entering the Lecomte, make no mistake –  Call Me Midnight improved significantly. He boosted his career-best Equibase Speed Figure eight points to a 97 and his Beyer Speed Figure by 14 points to a new top of 88. He likewise earned a new career-best 94 Brisnet speed rating, a more incremental jump from his previous best (91) earned for his maiden win at Churchill. Improvement early in the year is always a positive sign for a developing 3-year-old on the Derby trail.

Running Style: It’s crystal clear that Call Me Midnight performs at his best when covered up behind horses early and then making one late sustained rally. He profiles as a deep closer and at Fair Grounds he had a ton of real estate to make up ground in the longest stretch for a main track in North America, but the New Orleans track is not a dirt track that favors closers. It plays fair. For closers targeting the Kentucky Derby, they face some additional obstacles such as traffic and pace that are often out of their control.

Connections: Owner Peter Cantrell purchased Call Me Midnight for $80,000 at a 2-year-olds in training auction in 2021 and earned his first graded stakes victory when Call Me Midnight won the Lecomte.

Trainer Keith Desormeaux is best known as the trainer of 2016 Preakness Stakes winner Exaggerator, who was runner-up to Nyquist in that year’s Kentucky Derby. He also won 2014 Sentient Jet Breeders’ Cup Juvenile with Texas Red and is no stranger to monumental upsets at Fair Grounds having won the 2013 Risen Star Stakes with 135.20-1 longshot Ive Struck a Nerve. Desormeaux is the older brother of Hall of Fame jockey Kent Desormeaux.

James Graham is one of five riders Call Me Midnight has had in his seven starts, but Graham has been aboard for both of his wins to date. Graham took out his jockey’s license in 2003 and has won 2,837 races through Jan. 25, including five Grade 1 wins.

Pedigree Notes: Call Me Midnight is from the 10th crop of 2007 champion sprinter Midnight Lute, by 1998 Kentucky Derby and Preakness winner Real Quiet. Although a breathing issue limited Midnight Lute’s effectiveness to sprints, he has proved a versatile sire with standouts such as champion Midnight Bisou, Canadian classic winner Midnight Aria, and turf star Smooth Like Strait among many runners who excelled at longer distances.

Call Me Midnight is one of three winners from four starters out of the unraced First Defence mare Overseen from a prominent family cultivated by top international breeder Juddmonte Farms. The family has produced European champions such as Rainbow Quest, Commander in Chief, and Warning.

Derby Potential: While Call Me Midnight’s overall résumé is not as impressive as several other top 2022 Kentucky Derby contenders, he took a major step forward in his 3-year-old debut in the Lecomte Stakes. He beat a pair of 3-year-olds I held in high regard in runner-up Epicenter and third-place finisher Pappacap, and Call Me Midnight reeled in the former foe despite the fact that Epicenter essentially set an easy uncontested pace through three-quarters of a mile in 1:12.16. He still has some ground to make up from a speed-figure perspective, but he’s in the capable hands of an elite horseman in Keith Desormeaux and on a promising trajectory. His running style is a bit of a concern as it pertains to the first jewel of the Triple Crown as horses with tactical speed have dominated in recent years, but I’d expect him to be a player throughout the 2022 Triple Crown trail picking off rivals with late rallies in the stretch and posting top three finishes in big races.