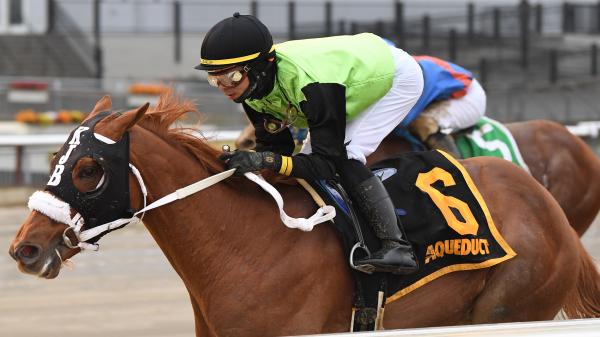 This week, we’ll take a closer look at Courvoisier, winner of the $150,000 Jerome Stakes on Jan. 1 at Aqueduct. He earned 10 points toward qualifying for the 2022 Kentucky Derby with that win. Courvoisier ranks 10th on the latest Road to the Kentucky Derby leaderboard.

Racing Résumé: Courvoisier needed four races to earn his first career win. He finished third in his debut at Monmouth Park and second twice at Delaware Park – all three times as the heavy favorite – before stretching out to 1 1/8 miles to win by a neck at 14-1 odds Dec. 2 at Aqueduct.

The Jerome Stakes was his first try in a stakes race as well as his first start on an “off” track, which was rated sloppy Jan. 1 at Aqueduct. He rallied impressively from just off the pace and pulled clear to win by 1 ¼ lengths in the one-mile prep for the 2022 Kentucky Derby.

While he has been consistently in contention in his four most recent starts and earned a breakthrough stakes win, there is fair skepticism surrounding the regally-bred colt simply because he has not yet run a fast race by speed-figure standards.

Speed Figures: After earning an 81 and 85 for his runner-up finishes at Delaware Park in September and October, respectively, Courvoisier dipped to a 70 for his maiden win and a 78 for the Jerome Stakes victory. Even his best number to date would not be fast enough on paper to compete with the best of the 3-year-old division. While he earned a career-best Beyer Speed Figure for the Jerome victory, that number was a 73 and far below the type of race a 3-year-old would need to win a major Kentucky Derby prep race, much less the first jewel of the Triple Crown.

Running Style: In each of his five starts to date, Courvoisier has settled into early position in second or third just behind the pacesetter. He has the tactical speed to gain good early position even if the pace is brisk and profiles as a stalker or press-the-pace type.

Courvoisier’s trainer Kelly Breen, who won the 2011 Belmont Stakes with Ruler On Ice, established a new career-best in purse earnings in 2021 with $4,783,831. Courvoisier has had four different riders for his five races with 2017 Eclipse Award winner Jose Ortiz guiding him to victory most recently in the Jerome.

Pedigree Notes: This is the aspect of Courvoisier’s Derby prospect profile that is by far the most interesting. Racing fans or bettors who are dismissive of bloodlines as an important factor in Kentucky Derby analysis almost certainly will be looking elsewhere or even betting against Courvoisier moving forward. On the other hand, if you value a regal pedigree Courvoisier certainly qualifies.

He is by leading sire Tapit, who is responsible for four of the last eight Belmont Stakes winners, including Essential Quality in 2021. Tapit also is the sire of Belmont Stakes winners Tonalist (2014), Creator (2016), and Tapwrit (2017) as well as champions Stardom Bound, Untapable, Unique Bella, and Hansen.

Derby Potential: It’s really all about the upside with Courvoisier. If you think he’s starting to figure things out and tap into his potential, his pedigree leaves a ton of room to dream big. Courvoisier hails from a family that has produced multiple champions in the last 10 years and he’s by arguably the most important sire in the country, if not the world.

The counterpoint, however, is a strong one: right now, he’s simply not fast enough. Courvoisier has plenty of time to improve but he will need to do so significantly to have any chance against the best 3-year-olds of his generation in major Kentucky Derby prep races late winter and spring. The average winning Equibase Speed Figure for the Kentucky Derby over the past 20 years is 111, so with a top figure of 85 Courvoisier must improve by 20-25 points to be a factor in the first jewel of the Triple Crown.