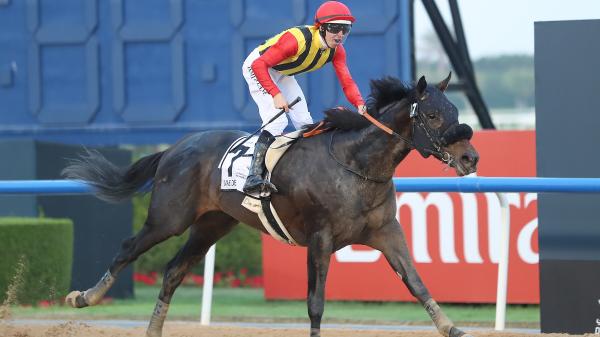 This week, we’ll take a closer look at Crown Pride, winner of the $1 million United Arab Emirates Derby Sponsored by Mubadala on March 26 at Meydan Racecourse in Dubai.

Crown Pride earned 100 points toward qualifying for the 2022 Kentucky Derby with that win and moved into second on the latest Road to the Kentucky Derby leaderboard.

After a promising 2-year-old season, Crown Pride cut back in distance to 1,600 meters (about one mile) for the Hyacinth Stakes Feb. 20 at Tokyo Racecourse with a new jockey on a track labeled as muddy. Crown Pride dropped well back early and was very wide on the turn in the Hyacinth. He passed several horses to reach contention in early stretch, but whether it was the trip or the surface or the distance, Crown Pride just didn’t have it and finished sixth, 3 ½ lengths behind winner Combustion.

Trainer Koichi Shintani next sent Crown Pride to Dubai for the UAE Derby at 1,900 meters (about 1 3/16 miles) and he excelled on a fast track with additional distance. The Reach the Crown colt was wide on both turns – legitimately five paths with on the second turn – but just wore down Summer Is Tomorrow with a relentless bid in deep stretch. He edged away to win by 2 ¾ lengths despite never switching from his inside to his outside lead in the stretch.

Crown Pride defeated 15 runners in the UAE Derby, although the U.S. contingent might generously be called the third or fourth string of Derby hopefuls and ran as such, finishing 13th, 15th, and 16th. Combustion, who beat Crown Pride in the Hyacinth, faded to finish 11th.

Several very nice horses have come out of this race in recent years, but none has made any sort of impact in the Kentucky Derby. The UAE Derby has quite simply been a terrible steppingstone to success on the first Saturday in May at Churchill Downs. All it takes is the right horse at the right time; however, as we’ll discuss, evaluating Crown Pride is quite difficult.

Speed Figures and Other Factors: Most U.S.-based speed-figure makers do not provide numbers for races in Japan or Dubai, so we’re left to evaluate by time, trip, and eye test. I was impressed that Crown Pride overcame significant ground loss and showed plenty of stamina in deep stretch. His final 300 meters (about three-sixteenths of a mile) in 21.61 seconds according to Trakus was significantly less inspiring. He did not finish fast.

Running Style: Although he was significantly father back in the Hyacinth, I view Crown Pride as more of a stalker. Those are the tactics he used to win his second race as a 2-year-old as well as the UAE Derby, and he was within striking range of a fairly strong pace in the latter. U.S. dirt racing speed is different, however, so it is very possible Crown Pride gets shuffled back in a 20-horse field in the Kentucky Derby, especially if he breaks a little slowly like he did at Meydan.

Connections: Owner Teruya Yoshida is son of Shadai Farm founder Zenya Yoshida, which makes Crown Pride essentially a Shadai Farm homebred. Teruya Yoshida played the key role in Shadai’s purchase of 1989 Horse of the Year Sunday Silence, which was one of the most consequential stallion acquisitions in Thoroughbred racing history. Quite simply, Sunday Silence shaped the modern Japanese Thoroughbred as leading sire for 13 consecutive years and helped elevate Japanese breeding-racing to new heights as a sire of sires.

Trainer Koichi Shintani currently ranks 11th in the Japan Racing Association trainer rankings. He earned his first group or graded stakes win in the UAE Derby after getting his start as a trainer in 2020.

Crown Pride was ridden by Damian Lane for the first time in the UAE Derby. Hideaki Miyuki was his rider as a 2-year-old; Mirco Demuro rode him in the Hyacinth.

Pedigree Notes: Crown Pride is by Reach the Crown, a grandson of the aforementioned Sunday Silence who stands at Arrow Stud in Japan. Reach the Crown was a multiple group stakes winner in his native country and runner-up in the 2009 Japanese Derby. Crown Pride seems to get a healthy dose of stamina from the top half of his pedigree and also showed some of the tenacity you often find from the Sunday Silence sire line.

Crown Pride’s dam (mother), Emmy’s Pride, by King Kamehameha, won nine of 27 starts and was exclusively a sprinter. Grandam (maternal grandmother) Emmy’s Smile, by Agnes Tachyon, was a stakes winner at about one mile and a winner at 2,000 meters (about 1 ¼ miles).

Derby Potential: Stamina and tenacity should not be an issue for Crown Pride in the Kentucky Derby, which at this point looks like it could be the next target. You can make a compelling argument that Crown Pride is a better Kentucky Derby candidate than previous Japanese-based runners Lani (ninth, 2016) and Master Fencer (sixth, 2019), however, there obviously are major questions.

Three-year-olds coming out of the UAE Derby are winless in 15 tries in the Kentucky Derby and none has finished in the top three. Shipping from Japan to Dubai to the United States in a span of about 2-3 months is a taxing amount of travel and significant changes as it pertains to climate.

Finding ideal position in a 20-horse field with what should be a faster pace also looks to be a major hurdle, especially combined with the fact that speed horses have performed exceptionally well in the Kentucky Derby in recent years. Horses who do rally from off the pace to win the Derby typically have an explosive turn of foot, while Crown Pride appears to be more of a grinder.

Still, given this year’s class of 3-year-olds appears to be average at best and Crown Pride has significant room to improve in his third start of the year and fifth race overall, I think he has a chance to run well … especially if his connections train him to switch leads in the stretch. I don’t think it would be a shock to see Crown Pride rally for a spot in the trifecta or superfecta on May 7 at Churchill.