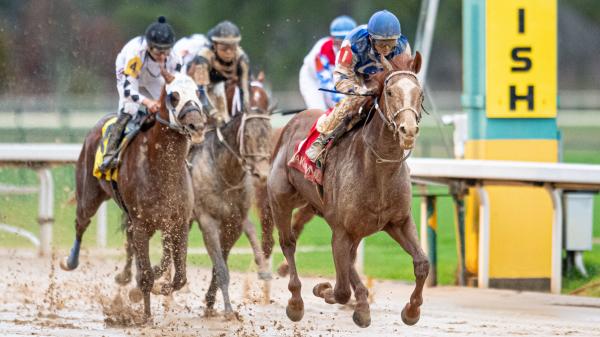 This week, we’ll take a closer look at Dash Attack, winner of the $250,000 Smarty Jones Stakes on Jan. 1 at Oaklawn Park. He earned 10 points toward qualifying for the 2022 Kentucky Derby with that win. Dash Attack ranks eighth on the latest Road to the Kentucky Derby leaderboard.

Racing Résumé: Dash Attack won his career debut going one mile Dec. 5 at Oaklawn Park on a track rated good and pulled away late to win by 1 ¼ lengths after stalking the pace. He followed with a visually impressive two-length win in the Smarty Jones Stakes Jan. 1 at the same one-mile distance, this time winning on a sloppy track. He didn’t finish especially fast in the race – he ran his final eighth of a mile in about 13:34 seconds – but he looked very good in winning and 3-year-olds rarely post fast finishing times at Oaklawn, especially early in the season.

He’s now 2-for-2 and has shown the ability to settle early in his races, identify a target, and not only reel in that target but extend his lead late to win by open lengths.

Speed Figures: After earning an 84 Equibase Speed Figure for his debut win, Dash Attack paired that figure in the Smarty Jones. While that number doesn’t jump off the page at you, several others were a bit more promising: he earned an 82 Beyer Speed Figure for the Smarty Jones and a 91 Brisnet speed rating. On the Ragozin Sheets, for which lower is better, he earned a 13 ¾. He’s not fast enough right now to win a major Kentucky Derby prep race; however, he’s only raced twice so there is a ton of room for improvement after a very nice start to his career.

Running Style: In both of his starts, Dash Attack has rallied from off the pace to win. He was closer to a slower pace in his debut. He was 7 ¾ lengths back at the midpoint of the one-mile Smarty Jones and shaved 4 ¼ lengths off that margin by the time he passed the quarter-pole. Closers can encounter traffic trouble facing larger fields on the Derby trail, particularly the Kentucky Derby which often feature 20 runners, and sometimes are dependent upon an honest pace to have a chance to win.

Jockey David Cohen is a consistent rider in the Midwest, leading the jockey standings at Oaklawn Park in 2019. He won the 2012 Travers Stakes in a dead heat aboard Golden Ticket.

Pedigree Notes: Dash Attack is from the eighth crop of multiple Grade 2 winner Munnings, who was at his best sprinting with all three of his Grade 2 wins coming at seven-eighths of a mile. Munnings was Grade 1-placed at 1 1/8 miles and, as a sire, his runners have shown the ability to carry their speed a distance and excel on multiple surfaces. I’m a Chatterbox was a Grade 1 winner at 1 ¼ miles and other top performers by Munnings such as Om, Bonny South, Warrior’s Charge, and Finite were graded stakes winners in two-turn races.

Derby Potential: Before I climb aboard this bandwagon, I’d like to see Dash Attack win on a fast, dry track as both of his wins have come on “off,” or wet, tracks. I think his pedigree might scare some people off, but I’m bullish that there is plenty of stamina top and bottom here for him to excel at longer distances, especially with his closing running style where he can gallop along for two-thirds or three-quarters of the race and then unleash one sustained run.

There is no doubt Dash Attack needs to run faster to be a major player on the 2022 Kentucky Derby trail, but with only two starts and a level of professionalism above what you would typically see in a lightly raced 3-year-old, there’s plenty of room for growth. I’ll be keeping a close eye on Dash Attack in the next Kentucky Derby Future Wager pool.