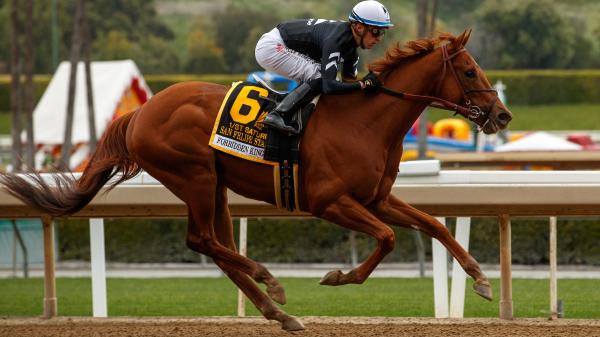 Racing Résumé: Forbidden Kingdom has three wins in five starts and has never finished worse than third for Hall of Fame trainer Richard Mandella, who has taken a somewhat patient approach with the American Pharoah colt. He had run exclusively in sprints ranging from five-eighths of a mile to seven-eighths of a mile until competing March 5 in the San Felipe at 1 1/16 miles.

He entered the Grade 2, 50-point qualifying race off of a front-running 2 ¼-length victory in the Grade 2 San Vicente Stakes in his 3-year-old bow. As a 2-year-old, he won his debut, ran third in a turf sprint, and then finished second to highly regarded Messier after fading late in the Grade 3 Bob Hope Stakes.

The San Felipe was a legitimate stamina test for the speedster. He was well-prepared by Mandella and aced the exam. He set a torrid, but uncontested pace through a half-mile in :45.90, led by seven lengths in early stretch, and coasted to a 5 ¾-length victory.

Given the pace, it is perhaps unsurprising that Forbidden Kingdom did not finish fast yet it’s still a cause for concern. Maybe the chestnut colt needs another competitor to push him a bit late, but the final sixteenth of a mile in 7.09 seconds and the final five-sixteenths in 33.52 seconds provide doubters a compelling reason he could struggle as the distances get longer.

Running Style: Forbidden Kingdom is a confirmed front-runner and Mandella has said they plan to use that speed as an asset rather than asking him to rate. Speed has been very valuable in the Kentucky Derby in recent years as the 3-year-old who crossed the finish line first in each of the last eight editions was third or better after the opening quarter-mile. There is usually competition for the early lead in the Kentucky Derby, but if Forbidden Kingdom starts on May 7 the competition most likely will be looking at his backside entering the first turn.

Connections:  Forbidden Kingdom is owned by the partnership of MyRacehorse and Spendthrift Farm, which teamed to purchase him for $300,000 at the 2020 Keeneland September yearling sale. The former offers accessible entry into racehorse ownership via micro-shares designed to introduce fans to ownership at the highest level at a fraction of the cost. The latter was founded by the late B. Wayne Hughes and operated with the motto that “breeders are the backbone of our industry,” according to the farm’s website. Hughes raced six champions, led by 2020 Horse of the Year Authentic, who he offered to the public via MyRacehorse.com, as well as four-time Eclipse Award winner Beholder. Eric Gustavson now owns Spendthrift, which stands 25 stallions, including Into Mischief, the leading sire in 2019, 2020, and 2021.

Richard Mandella was inducted into the Racing Hall of Fame in 2001. Two years later, Mandella completed the remarkable feat of sending out four winners on an eight-race Breeders’ Cup card: Halfbridled, Juvenile Fillies; Action This Day, Juvenile; Johar, John Deere Turf (Dead Heat); and Pleasantly Perfect, Classic. The son of a farrier and one of the most respected horsemen in the sport, Mandella has amassed nine Breeders’ Cup wins (three with the aforementioned Beholder) and more than 2,200 career victories but is still seeking his first in a U.S. Triple Crown race.

A native of Veracruz, Mexico, Juan Hernandez started riding in his native country before moving to the U.S. in 2009. He enjoyed a career-best year in 2021 with three Grade 1 wins and more than $11 million in purse earnings, dwarfing his previous best of nearly $6.4 million. Hernandez has ridden Forbidden Kingdom in each of his five races.

Pedigree Notes: Forbidden Kingdom is from the third crop of 2015 Triple Crown winner American Pharoah, whose top runners to date are Grade 1 winners As Time Goes By (dirt) and Harvey’s Lil Goil (turf).

Derby Potential: Forbidden Kingdom is a 3-year-old on a promising trajectory in the hands of one of the best, and cleanest, trainers in Thoroughbred racing. His speed figures are on the rise and he possesses tremendous cruising speed. His first try navigating two turns in the San Felipe was very impressive, but he was slowing down late and there are some reasons to be skeptical about his chances to excel at 1 ¼ miles based upon his pedigree.