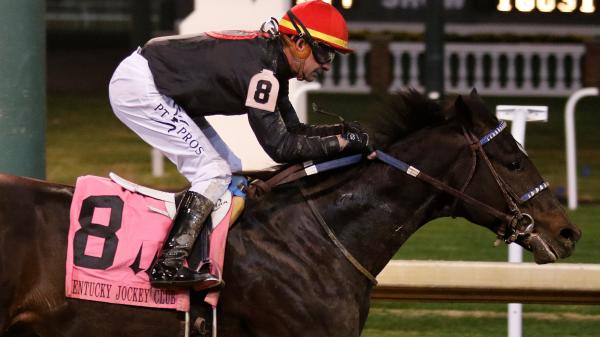 Racing Résumé: Smile Happy improved to 2-for-2 with a second straight dominant victory when winning the $400,000 Kentucky Jockey Club Stakes by 3 ¼ lengths Nov. 27 at Churchill Downs. That followed a similarly dominant 5 ½-length romp in his career debut Oct. 29 at Keeneland.

He’s now won twice going around two turns and he has a win on the track that hosts the Kentucky Derby. The dark bay or brown colt also handled a much more difficult task in his second start when going from a maiden race (a race in which none of the horses has ever won a race) to a Grade 2 race that drew 11 promising 2-year-olds.

Smile Happy’s 90 Beyer Speed Figure for the Kentucky Jockey Club is only four points off the best figure earned by a 2-year-old in a two-turn race this year, which was a 94 by Echo Zulu for winning the NetJets Breeders’ Cup Juvenile Fillies Nov. 5 at Del Mar.

Running Style: Smile Happy profiles as a stalker. He has enough early speed to race within striking distance of the early leaders but reserves his energy a few lengths behind the pace before launching his bid approaching the stretch.

Connections: The Mackin Family’s Lucky Seven Stable now has a pair of exciting Kentucky Derby prospects in Claiborne Breeders’ Futurity winner Rattle N Roll and Smile Happy, both of whom are trained by Kenny McPeek. McPeek has won more than 1,800 races in his career, including the 2020 Preakness Stakes with filly Swiss Skydiver and the 2002 Belmont Stakes with 70.25-1 longshot Sarava. McPeek purchased Smile Happy for $185,000 on behalf of Lucky Seven at the 2020 Fasig-Tipton Kentucky October Yearling sale. Jockey Brian Hernandez Jr. was aboard Smile Happy in his debut victory, and fellow Kentucky-based jockey Corey Lanerie rode him in the Kentucky Jockey Club Stakes.

Pedigree Notes: Smile Happy is from the second crop of 2015 champion sprinter Runhappy out of the Pleasant Tap mare Pleasant Smile, who won three of 12 career races, including one at one mile and another at 1 1/16 miles. Pleasant Smile’s family has produced 2003 Kentucky Derby and Preakness winner Funny Cide as well as Grade 1 winner Hail the Pirates.

Derby Potential: Smile Happy looked like a winner in the Kentucky Jockey Club from about the mid-point on the final turn and he finished impressively with a final sixteenth of a mile in 6.24 seconds. While there might be some concerns about a colt by Runhappy stretching out to 1 1/16 miles, he sure looked like a horse comfortable at and capable of excelling as the distances get longer. With a win on the main track at Churchill Downs and improving speed figures, Smile Happy sure looks like one to watch on the 2022 Triple Crown trail.