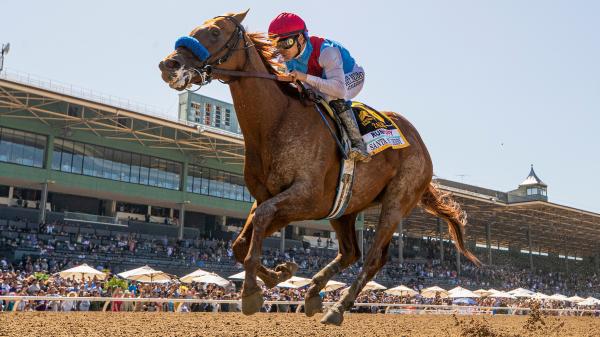 This week, we’ll take a closer look at Taiba, winner of the $750,000 Runhappy Santa Anita Derby on April 9 at Santa Anita Park.

Taiba earned 100 points toward qualifying for the 2022 Kentucky Derby with that win and moved into fourth place on the latest Road to the Kentucky Derby leaderboard.

Racing Résumé: Taiba entered the Runhappy Santa Anita Derby after just one race, a 7 ½-length dusting of six opponents in a three-quarter-mile maiden special weight race March 5 at Santa Anita Park. The $1.7 million purchase at auction as a 2-year-old in training faced a major class test after a scintillating debut that earned remarkable speed figures (more on that below) and he aced the exam against two highly regarded 3-year-olds.

Taiba reeled in graded-stakes-winning stablemate Messier in the final furlong of the Santa Anita Derby with a final eighth of a mile in about 12.40 seconds, according to the Equibase chart, and 12.55 seconds according to Trakus data. That’s a very solid final eighth of a mile after stalking pacesetter Forbidden Kingdom, the San Felipe Stakes winner, through a quarter-mile in :22.75 and a half-mile in :46.70. Taiba looked in victory every bit a two-turn horse who relished the distance.

Inexperience and foundation are the two main concerns with Taiba’s résumé. He’s faced a total of 11 horses in his two races, so he has not been challenged by as much adversity as most of his peers with traffic, pressure, jostling, etc.

As for foundation, while Taiba appears bred to relish 1 ¼ miles and seemed to have plenty left in the tank in the Santa Anita Derby, he ran a monster race in his second start and now must face stronger competition on four weeks rest while navigating an additional eighth of a mile in a 20-horse field. That’s a lot to throw at a 3-year-old in his third start.

Speed Figures: Sometimes our eyes deceive us, especially when it comes to maiden races where there is little way to judge the quality of competition. So, when Taiba’s eye-catching debut win earned a 102 Equibase Speed Figure, a 103 Beyer Speed Figure, and a remarkable 7 on the Ragozin Sheets, it reinforced the suspicion that this was an extremely talented racehorse. He followed with a 102 Equibase Speed Figure and 102 Beyer Speed Figure for the Santa Anita Derby, essentially matching his debut despite racing three-eighths of a mile farther. In short, Taiba is absolutely fast enough to win the Kentucky Derby.

Running Style: After pressing a swift pace in his debut – opening quarter-mile in :22.26 – Taiba assumed more of a stalking position in the Santa Anita Derby and still powered clear to win by 2 ¼ lengths. He has tactical speed and the mental maturity to harness it and listen to the instructions of his rider.

Connections: Taiba is owned by Zedan Racing Stables, the racing operation of Saudi Arabian businessman Amr F. Zedan. According to his website, Zedan is Chairman of The Zedan Group, a family-owned, energy-focused group of companies based in Saudi Arabia. Zedan Racing also raced Grade 1 winners Princess Noor and Medina Spirit, the ill-fated colt who finished first in the 2021 Kentucky Derby Presented by Woodford Reserve before he was disqualified for a medication violation.

Taiba was part of a batch of horses transferred from Hall of Famer Bob Baffert to Tim Yakteen prior to the final round of Kentucky Derby/Oaks prep races. Baffert’s runners were ineligible to earn points toward qualifying for the Kentucky Derby and he is barred from running in all three Triple crown races this year.

Yakteen was a former assistant to both Baffert and fellow Hall of Fame trainer Charlie Whittingham before going out on his own in 2004. He has trained Grade 1 winners Points Offthebench and Mucho Unusual among more than 250 winners.

Hall of Fame jockey Mike Smith rode Taiba for the first time in the Santa Anita Derby. A two-time Eclipse Award winner, Smith was the regular rider for 2018 Triple Crown victor Justify among seven wins in Triple Crown races. He ranks third among North American riders in all-time purse earnings with more than $339 million through April 10.

Pedigree Notes: Taiba is a member of a very promising first crop from 2017 Horse of the Year Gun Runner, who very likely will have three Kentucky Derby entrants in Taiba, Arkansas Derby winner Cyberknife, and Wood Memorial Stakes Presented by Resorts World Casino runner-up Early Voting from that group. He also could have the Longines Kentucky Oaks favorite in unbeaten Echo Zulu, last year’s champion 2-year-old filly. Tough to get off to a better start as a stallion than what we’ve seen thus far from Gun Runner.

Derby Potential: Simply based on talent, Taiba looks like one of the top two or three 3-year-olds on the Kentucky Derby trail with an enticing combination of tactical speed and elite speed figures. If this was the Preakness Stakes or the Haskell Invitational Stakes with a field of 10 to 12 horses, Taiba would be extremely formidable and he might be just as tough in the Kentucky Derby. But the first jewel of the Triple Crown is an entirely different beast, and racing experience becomes much more valuable when asking a 3-year-old to try 1 ¼ miles for the first time against the deepest, biggest field he has ever faced in front of 150,000 screaming fans.

Perhaps Taiba is the rare animal who can handle all of that – he has done nothing to indicate he can’t – but this will be a monumental challenge for this chestnut colt in his third race. I’m not skeptical about the talent but I am dubious as it pertains to Taiba’s chances to win the Kentucky Derby with so little experience.