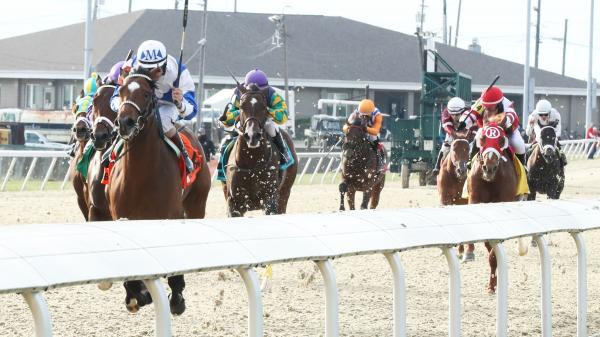 Welcome to 2022 Kentucky Derby Prospect Snapshots, where we’ll take a look each week at a recent winner on the Triple Crown trail, usually from the Road to the Kentucky Derby schedule from which the racehorses earn points toward qualifying.

This week, we’ll take a closer look at Tiz the Bomb, winner of the $600,000 Jeff Ruby Steaks on April 2 at Turfway Park.

Tiz the Bomb earned 100 points toward qualifying for the 2022 Kentucky Derby with that win and moved into fifth place on the latest Road to the Kentucky Derby leaderboard with 110 points.

Racing Résumé: To dirt, or not to dirt? That is the question for Tiz the Bomb and really the only concern for a colt who has five wins and one second in seven races at one mile or longer. He’s a multiple stakes winner on turf and synthetic surfaces with his signature races a runner-up finish in the 2021 Breeders’ Cup Juvenile Turf and a win in the $600,000 Jeff Ruby Steaks on the synthetic track at Turfway Park.

However, while Tiz the Bomb won the second start of his career by 14 ¼ lengths going one mile on the dirt main track at Ellis Park, that came in race washed off the turf against only five other horses. His two other dirt races … did not go well. Tiz the Bomb finished seventh of eight at Churchill Downs in a 5 ½-furlong sprint in his career debut May 14, 2021, and in his 3-year-old bow he ran seventh of nine, beaten by 20 ¼ lengths, in the Holy Bull Stakes Feb. 5 at Gulfstream Park.

Tiz the Bomb clearly possesses an abundance of ability, but whether he’s capable of running the type of peak race on dirt that it would take to win the Kentucky Derby remains to be seen.

The Ragozin Sheets (lower is better) gave Tiz the Bomb a 9 for his John Battaglia Memorial Stakes win March 9 and he improved to a 7 ¾ for the Jeff Ruby. At his best, he fits from a speed-figure perspective. He simply has yet to run his best on dirt.

Running Style: Tiz the Bomb has an explosive turn of foot that allows him to inhale opponents late with a powerful rally. He typically settles into a nice rhythm and makes one late run, so he could be compromised by traffic in a 20-horse Kentucky Derby field and probably would benefit greatly from a swift early pace.

Connections: Magdalena Racing, Lessee, is the owner of Tiz the Bomb, who previously raced for Phoenix Thoroughbreds. Magdalena Racing partnerships are part of McPeek Racing, which was founded in 1985 and is headquartered at Magdalena Farm in Lexington, Ky. Trainer Ken McPeek purchased the 115-acre property in 2006.

Ken McPeek took out his trainer’s license in 1985 and has amassed more than 1,800 victories through April 25, highlighted by a 70.25-1 upset win by Sarava in the 2002 Belmont Stakes and a victory by the filly Swiss Skydiver in the 2020 Preakness Stakes. McPeek also trained 1995 Kentucky Derby runner-up Tejano Run.

Brian Hernandez Jr. has ridden Tiz the Bomb in seven of his eight starts. Hernandez has won 2,327 races through April 25 and probably is best known as the jockey of 2012 Breeders’ Cup Classic winner Fort Larned. The Louisiana native also won the 2004 Eclipse Award as outstanding apprentice jockey.

Pedigree Notes: Tiz the Bomb is from the second crop of runners sired by 2015 Breeders’ Cup Juvenile Turf winner Hit It a Bomb and is his sire’s top earner to date.

Tiz the Bomb is out of the winning Tiznow mare Tiz the Key, who won at one mile on the main track and 1 ¼ miles on the grass. Tiz the Key is a half-sister (same dam, different sire) to stakes winner King of Dreams. If you dig deep enough into the bottom half of this pedigree, you’ll find 1992 Horse of the Year and influential sire A.P. Indy and his Preakness-winning half-sibling Summer Squall.

Derby Potential: When scouring the past performances for a Kentucky Derby horse, it’s all about risk-reward. With Tiz the Bomb, the reward promises to be strong as he most likely will start the race somewhere between 18-1 and 30-1 odds.

If you are looking for a live Derby longshot, typically you must be willing to sacrifice something: a runner coming off a somewhat disappointing race, questions about distance limitations, low speed figures comparatively, etc. For Tiz the Bomb, it is all about the surface. He’s talented and fast with plenty of stamina, but can he run an “A” race on dirt against the best of his generation May 7 at Churchill Downs when his best races have come on turf or synthetic surfaces?

What Tiz the Bomb backers are banking on is that he is more like Animal Kingdom, who won the Spiral Stakes (since renamed the Jeff Ruby Steaks) at Turfway before winning the 2011 Kentucky Derby by 2 ¾ lengths, than he is like Derby also-rans Fast and Accurate or Like the King.

Tiz the Bomb’s career record on dirt is sufficient reason to be skeptical. However, I would rather back a longshot who may or may not care for the surface than one I know is not fast enough or will need public transportation to handle 1 ¼ miles. At 20-1 to 30-1, you are at least getting elite talent for your betting buck.