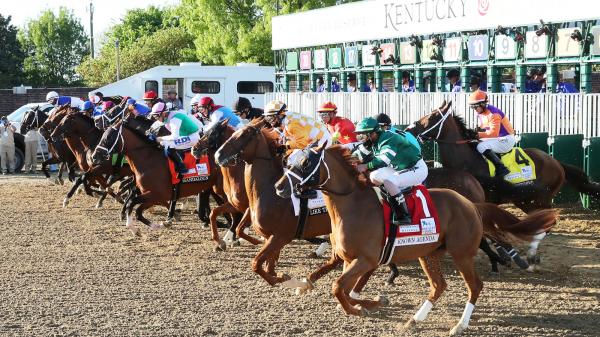 The Kentucky Derby Presented by Woodford Reserve is rightfully known as the most exciting two minutes in sports; once the Churchill Downs starting gate springs open anything can (and often does) happen. For the 20 3-year-old Thoroughbreds competing it is one of the most important moments of their lives, racing luck can make or break their Derby run from the start. However, some of that luck comes into play several days beforehand: the luck of the post-position draw.

Kentucky Derby post positions will be randomly assigned at the Monday draw on May 2, but their influence on the race seems to be far from arbitrary.

The Kentucky Derby has used a starting gate since 1930; and traditionally two of them, actually. One held 14 horses and the other, called the auxiliary gate, was attached to the outside of the main gate to allow for six more horses. That changed in 2020 when Churchill Downs secured a single gate that holds all 20 horses. Interestingly, the race was won by Authentic who drew the post farthest to the outside, post-position 15. Authentic initially drew post 18 but moved in three spots after three horses were scratched, or withdrawn, from the race.

Common sense might suggest that the inside posts are favorable since the running near rail is the shortest way around a racetrack. This could be true in races with fields of 10 horses or fewer, but in the Kentucky Derby there are as many as 20 racehorses leaping from the gate and rushing to secure position before the field heads into the first turn. This means there’s a lot of bumping and jostling as the field compresses to the inside of the racetrack. And that means the horses already on the inside are going to get the worst of it, which could discourage them or negatively affect their positioning.

Horses on the outside are usually subject to less bumping, but if they don’t make it across the track before the first turn they can be left wide. In the Kentucky Derby the turns account more than 40% of the 1 ¼-mile race. Assuming the width needed for a racehorse and rider is four feet, for every path off the rail, a horse runs more than 25 feet farther. A horse six paths off the rail on both turns will run 150 feet farther than a horse on the rail, making their race that much more grueling. It’s important to find a balance between far enough inside to save ground and far enough outside that a horse can easily maneuver to be in the clear when the real running starts: the homestretch.

So what post position is ideal? Conventional wisdom says that somewhere in the middle of the gate, positions 5-15, is best. In recent years, though, there seems to be a trend toward outside posts having more success, due in part to the crowded fields of the last couple of decades. Since 2000, 11 of the 22 Kentucky Derby winners have broken from gate 13 or higher. From the 70 races that used a gate before 2000, just 10 winners broke from gate 13 or higher. Some of the recent winners were favorites (Nyquist, American Pharoah, Big Brown, etc.) who might have won from an inside gate anyway, but some weren’t.

Other interesting post-position stats include a 10.9% win rate for gate 5, which was the post position of both 2017 winner Always Dreaming and 2014 winner California Chrome. Gate 10 has also produced a relative high rate of winners at 10.6%, and horses finishing in the money (top three) at a remarkable 28.2%. The last Derby victor to come from 10 was Giacomo, who was also that last gray horse to win the Derby.

Notably, no horse has ever won from post-position 17 and the last time gate 17 produced a horse that even finished in the top five was 2005. The big Kentucky Derby favorite in the 2020 September run for the roses, Tiz the Law, initially drew post 17. His chances, historically speaking, improved when other defections in the race moved inside to post 14. But that spot, and its 3% success rate, didn’t make much of a difference after Authentic (drawn just to the outside of Tiz the Law) got the early jump and settled on a loose and comfortable lead near the rail. Tiz the Law chased from a wider stalking position and finished second.

Last year’s Derby ended up producing another notable statistic, one that was made official roughly eight months after the race. It resulted in only the second disqualification of the winner in Derby history due to a medication positive, as 2021 first-place finisher Medina Spirit was stripped of his title and purse money in early 2022 and runner-up Mandaloun was declared the winner by Kentucky Horse Racing Commission stewards. Medina Spirit and Mandaloun broke from the gate right next to one another in posts 8 and 7, respectively. After Medina Spirit’s DQ (which has not been adjusted in the Equibase chart as of April 26), both of those posts now share the exact same winning percentage of 8.8% (8 wins in 91 starts).

Get the stats on all the post positions below. Once the Kentucky Derby post position draw takes place this year on Monday, May 2, the chart below will be updated to reflect which horses will be running from each of the available posts.

* Medina Spirit finished first in the 2021 Kentucky Derby but was disqualified and placed last in February 2022 due to a medication violation. Mandaloun was declared the winner.

2022-04-26
Previous Post: Poker Players Band Together to Help David “AtomBomb” Hendrix Play in WSOP 2022
Next Post: A New Experience for Me