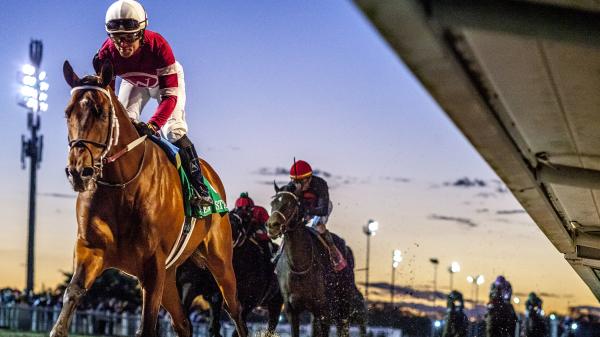 This feature provides a capsule look at three horses who are heating up on the Triple Crown trail and three horses whose chances for the Kentucky Derby Presented by Woodford Reserve are not quite as strong as they were a few weeks ago.

In this edition, the focus is the 3-year-old stakes races that have taken place over the last two weeks, plus an exciting maiden winner who really turned some heads. With the action on the Derby trail heating up, this column will now appear regularly to analyze to biggest movers approaching the first leg of the Triple Crown.

There were not a ton of key 3-year-old races over the previous two weeks, but we came out of them with a solid top three for the heating up section, highlighted by $400,000 Risen Star Stakes Presented by Lamarque Ford winner Epicenter. The bay Not This Time was caught in the closing strides of the Lecomte Stakes Jan. 22 at Fair Grounds as the 8-5 second choice after setting an uncontested pace in what I viewed as a somewhat disappointing race given the circumstances. Four weeks later at the New Orleans track, Epicenter again was permitted to set the tempo uncontested, but this time he had plenty of gas in the tank and coasted to a 2 ¾-length win. He completed his final eighth of a mile in a very solid 12.45 seconds for the 1 1/8-mile race and his final three-eighths of a mile likewise was a strong 36.78 seconds. His Equibase Speed Figures have been remarkably consistent with a 95 for his November 2021 maiden win at Churchill Downs and three straight 97s for his Gun Runner Stakes win, Lecomte second, and Risen Star victory Feb. 19. Beyer Speed Figures credited him with a 10-point jump to a new career-best 98 for the Risen Star, while his Brisnet speed rating improved five points to a new top of 98. For the latter two, Epicenter is right there within range of the top 3-year-olds. With a win at 1 1/8 miles and a solid pedigree for Hall of Fame trainer Steve Asmussen – plus reigning Eclipse Award winner Joel Rosario in the saddle – Epicenter profiles as a major player for the 2022 Kentucky Derby. He also essentially punched his Derby ticket by earning 50 points in the Risen Star to give him 64 total, which leads all 3-year-olds. Epicenter’s dam (mother), Silent Candy, by Candy Ride, was a stakes winner at one mile.

I tend to avoid maiden winners in this blog or, more specifically, 3-year-olds untested against stakes competition. But I’ve become a bit of a Charge It “stan” since Patrick Reed opened my eyes to the promising Tapit colt from the family of champion Will Take Charge when he wrote about him in a recent edition of his Derby Futures blog. Charge It flashed potential when second by a neck to Volcanic in a one-mile race Jan. 8 at Gulfstream Park, where he ran out of steam in the final strides but was 12 ½ lengths clear of the third-place finisher. Sent off at 1-5 for his second start, there was no money to be made but Charge It won like you would expect from an overwhelming favorite by powering to an 8 ½-length runaway in the one-mile race Feb. 12 at Gulfstream. After setting the pace through a half-mile in :47.47, Charge It finished with a fast closing quarter-mile in :24.10. The speed figures were very good, including one in particular that was exceptional. Charge It earned a 7 ¾ on the Ragozin Sheets (lower is better) that places him firmly among the fastest 3-year-olds. He also earned a new career-best 103 Equibase Speed Figure, improved his Brisnet speed rating seven points to a 98, and posted a 93 Beyer Speed Figure. He’s a very fast horse with an elite pedigree in the hands of Hall of Fame trainer Todd Pletcher, so Charge It must be respected. The class test against stakes competition will come, but Charge It looks like he’s legit.

I profiled this Giant’s Causeway colt, winner of the $250,000 Sam F. Davis Stakes Feb. 12 at Tampa Bay Downs, for last week’s Kentucky Derby Hopeful Snapshots blog. He had finished in the top three in a pair of key 2-year-old stakes in 2021 – the Grade 1 Claiborne Breeders’ Futurity and the Grade 2 Kentucky Jockey Club Stakes, both times behind highly regarded racehorses – before a breakout 3 ¾-length win in the Sam F. Davis. It’s encouraging when a 3-year-old returns from a layoff for his season debut and dominates. He was pressured while setting a solid pace and still finished quite well with a final sixteenth of a mile in an impressive 5.98 seconds. He has improved his Equibase Speed Figure in each start with a new 104 benchmark for the Sam F. Davis, and Classic Causeway likewise earned a new best 99 Brisnet speed rating, a five-point jump. The 88 Beyer Speed Figure was a bit less promising, but solid for his first start at 3, as was his 11 on the Ragozin Sheets. He’s a 3-year-old who has a chance to take a big step forward in his second start of the year for trainer Brian Lynch.

Honorable Mention: Because his 3-year-olds are ineligible to compete at Churchill Downs for the 2022 and 2023 Kentucky Derbys, I have not been including Bob Baffert trained horses in this blog. Blackadder, however, won the El Camino Real Derby Feb. 12 on the synthetic Tapeta Footings track at Golden Gate Fields and earned a guaranteed spot in the May 21 Preakness Stakes. On paper, he does not look fast enough (career-top 85 Equibase Speed Figure) to be a major factor in any of the U.S. Triple Crown races unless he makes major strides in the coming months.

This Nyquist colt closed out his 2-year-old season with a one-length win over Messier in the $300,000 Los Alamitos Futurity on Dec. 11. That win looked even better when Messier won the Grade 2 Robert B. Lewis Stakes by 15 lengths in his first start of 2022, but Slow Down Andy was unable to follow suit in the Risen Star Stakes Presented by Lamarque Ford Feb. 19 at Fair Grounds. He made a mild bid under Mario Gutierrez after tracking the pace before fading to finish sixth, beaten by 10 lengths by winner Epicenter. His Equibase Speed Figure dipped from a 95 in the Los Alamitos Futurity to an 82 for the Risen Star. It’s far too soon to throw in the towel on this talented Nyquist colt from the barn of two-time Kentucky Derby-winning trainer Doug O’Neill, but it also was not the kind of 3-year-old debut you like to see for a Derby hopeful. Perhaps Slow Down Andy will improve in his second start of the year … he will need to in order to remain in the hunt on the Triple Crown trail.

The TVG Breeders’ Cup Juvenile Presented by Thoroughbred Aftercare Alliance runner-up followed a mostly promising season debut – third, beaten by less than a length in the $200,000 Lecomte Stakes – with probably the worst performance of his career to date in the Risen Star Stakes Presented by Lamarque Ford Feb. 19 at Fair Grounds. He tucked in just behind a comfortable pace but had nothing left in the stretch and faded to eighth, beaten by 14 ¼ lengths. The 76 Equibase Speed Figure was the worst since an unplaced finish in the Del Mar Futurity last September and 20 points less than the figure he earned in the Lecomte. As quite a few analysts have pointed out, the 2021 Breeders’ Cup Juvenile runners have not impressed so far in 2022 with zero combined wins from eight starts this season (nine starts overall post-Breeders’ Cup) among the 11 starters.

The Neolithic colt improved to 3-for-3 with a win Dec. 17 in the Remington Springboard Mile to bank 10 points on the Road to the Kentucky Derby, but he faltered against tougher competition in the Grade 3 Sam F. Davis Stakes Feb. 12 at Tampa Bay Downs. Make It Big gained solid early position in third in the early going of the Sam F. Davis, but he faded late and finished 10th in the 12-horse field, beaten by 16 ¾ lengths by winner Classic Causeway. I’m always cautious about making snap decision based upon one race when evaluating lightly raced 3-year-olds, and some horses just don’t seem to care for the main track at Tampa Bay Downs. But it’s fair to say the Tampa Bay Derby was a bit of a dud for Make It Big’s 3-year-old debut. He’ll need to rebound in a big way in his next start to keep any classic aspirations afloat.

Of note: Jack Christopher looked like a budding superstar when he won his first two starts in dominant fashion, including a flashy 2 ¾-length win in the $500,000 Champagne Stakes. His 2-year-old season was cut short, however, when he was scratched from a planned start in the 2021 TVG Breeders’ Cup Juvenile Presented by Thoroughbred Aftercare Alliance because of a stress fracture in his left shin. Trainer Chad Brown told Daily Racing Form in February that he thought the Kentucky Derby was at best a longshot, and with no timed workouts yet it’s hard to imagine the talented colt will be a factor on the Derby trail.