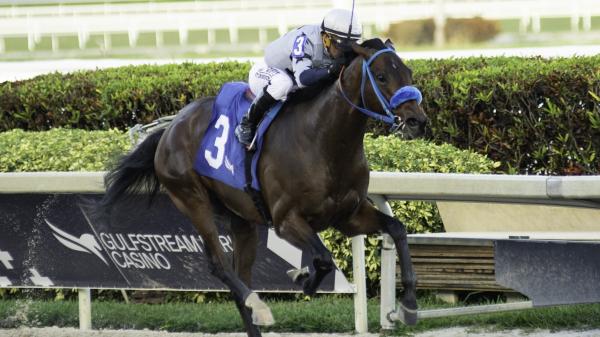 This feature provides a capsule look at three horses who are heating up on the Triple Crown trail and three horses whose chances for the Kentucky Derby Presented by Woodford Reserve are not quite as strong as they were a week or two ago.

In this edition, the focus is the 3-year-old stakes races that have taken place since the Christmas holiday. With the action on the Derby trail heating up, this column will now appear regularly to analyze to biggest movers approaching the first leg of the Triple Crown.

Of all of the winners since Christmas, Epicenter impressed me the most. I really like the way he was able to use his speed to gain tactical position, settled, and then pounced when asked to accelerate in winning the Gun Runner Stakes Dec. 26 at Fair Grounds. He extended his stride nicely in the stretch of his first start navigating two turns and covered the final sixteenth of a mile in 6.56 seconds on his way to a 6 ½-length romp. He improved his Equibase Speed Figure from a 97 for his Nov. 13 maiden win going a mile at Churchill Downs to a 98 and also earned a career-best 87 Beyer Speed Figure and a very encouraging 11 (lower is better) Ragozin figure for the Gun Runner win. By promising young sire Not This Time out of a Candy Ride mare who was a stakes winner at one mile, he should be able to continue to excel in two turn races as the distances get longer for Hall of Fame trainer Steve Asmussen. Read more about him in Patrick Reed’s Kentucky Derby Hopeful Snapshots profile.

I went into more detail about Smarty Jones Stakes winner Dash Attack in this week’s Kentucky Derby Hopeful Snapshots feature on the Munnings colt. The main thing I like about him is the way he identifies a target in his races, reels in that target, and continues running hard after taking control. I’m a little concerned that both of his starts (both wins) have come on wet tracks and that the speed figures are slower than some of his peers – career-top 84 Equibase Speed Figure and 82 Beyer Speed Figure – but I think he has plenty of room to improve for trainer Kenny McPeek. At first glance, his pedigree seems ill-suited to longer distances, but there is some stamina on the bottom half and sire Munnings has been responsible for several elite runners in races at 1 1/8 miles and beyond.

This colt has been hit or miss in four career starts. He followed an unplaced finish in his debut with a 16 ¾-length runaway victory Oct. 23 at Gulfstream Park that earned a nice 92 Equibase Speed Figure. Three weeks later, he regressed when a well-beaten third that earned a 60 Equibase Speed Figure. Perhaps the turnaround time was too quick considering how fast he ran in his previous start, but he was back on top of his game in the Mucho Macho Man Stakes Jan. 1 at Gulfstream Park, where he led from start to finish in a four-length score. He completed the final furlong of the one-mile Mucho Macho Man in an impressive 12.44 seconds after setting a solid pace through a half-mile in :45.81. The speed figures came back strong across the board: 100 Equibase Speed Figure, 90 Beyer Speed Figure, 99 Brisnet rating, and a 10 ¼ on the Ragozin Sheets. He is bred almost exactly like the aforementioned Epicenter – by Not This Time out of a Candy Ride mare (stakes-placed, in this case) – and hails from the family of champion Ashado. Trainer Antonio Sano won the Fountain of Youth Stakes and finished second in the Travers in 2017 with Gunnevera, so he knows what to do with a good 3-year-old. Simplification looks like an exciting prospect.

Honorable Mention: Courvoisier also was profiled in a Derby Hopeful Snapshots feature after he won the $150,000 Jerome Stakes Jan. 1 at Aqueduct. He has a dazzling pedigree – by leading sire Tapit out of champion Take Charge Brandi – but right now he’s just not fast enough. Could he improve enough to be a serious player on the Derby trail? Sure, but I wouldn’t bet on it. … Newgrange dictated the pace against a small field in winning the $100,000 Sham Stakes win New Year’s Day at Santa Anita Park and coasted to a 2 ¾-length win. He really wasn’t challenged in the race, and even though I respect runner-up Rockefeller and third-place finisher Oviatt Class it is tough to draw too many conclusions from what looked like a glorified workout. Complicating matters is the fact that he did not accrue any qualifying points for the Kentucky Derby because his trainer, Bob Baffert, is barred from participating in the race for two years after Medina Spirit’s medication violation after finishing first in the Derby in 2021. I really don’t know what to expect moving forward for the 3-year-olds in Baffert’s stable. Will they stay with him or be transferred to another trainer? I have no idea, so in general I plan to reserve judgement on them as it pertains to the first jewel of the Triple Crown until their situation becomes clearer.

As an avid fan of boxing who has probably watched the first round of the bout between Tommy “Hitman” Hearns and “Marvelous” Marvin Hagler at least a few dozen times, I’ve monitored Hagler’s progress intently since his maiden win Oct. 29, 2021, at Belmont Park. He looked like he had a future as a stakes horse after a front-running allowance win Dec. 16 at Aqueduct, but he came up short in his first try at that level Jan. 1 in the Jerome Stakes. The 16-day turnaround was fairly quick and the Jerome marked Hagler’s first try on an “off” track, in this case sloppy, and he might not have cared for the surface. Because there are legitimate excuses for the lackluster fifth-place finish in the Jerome, in which he was beaten by five lengths, it’s worth giving Hagler a second chance. However, he still has yet to run a particularly fast race so he does need to take a significant step forward to be competitive against the best of the 3-year-old male division.

Finding 3-year-olds on the Derby Trail for the cooling down section is difficult and, at times, unfair in January. Many of these horses, like Home Brew and Hagler (above), are taking a step up in level of competition to run in a stakes race for the first time and that is a significant hurdle. It can be tough to predict how any racehorse will handle better competition for the first time. After posting two wins and a close second in his first three races for trainer Brad Cox, Home Brew took a step back when finishing 10th, beaten by eight lengths, in the Smarty Jones Stakes Jan. 1 at Oaklawn Park. Perhaps he did not care for the sloppy track or the jump in class was too much too soon, but sometimes a race like that can be eye-opening for a young racehorse and can lead to a better understanding of their job and improved focus during morning training. He’s a full-sibling (same sire [father], same dam [mother]) to a Grade 2 winner and clearly has some talent himself, so Home Brew is definitely worth keeping an eye on for his next start.

I’ve been waiting for Oviatt Class to take that next step since a sparkling maiden win in August at Del Mar, where he unleashed a powerful rally to win by 4 ¼ lengths, but it has not happened yet. The Bernardini colt has not performed poorly in three subsequent starts – he was third in the Grade 1 American Pharoah Stakes, fifth in the TVG Breeders’ Cup Juvenile Presented by Thoroughbred Aftercare Alliance, and third most recently in the Grade 3 Sham Stakes – but he hasn’t come close to winning for trainer Keith Desormeaux. The Sham was a race where he probably had little chance to win given victor Newgrange set a leisurely pace in a small field and coasted to a front-running score, but small fields and speed-favoring surfaces are what he has to look forward to on the Southern California Kentucky Derby trail unless Desormeaux decides to try a different venue.