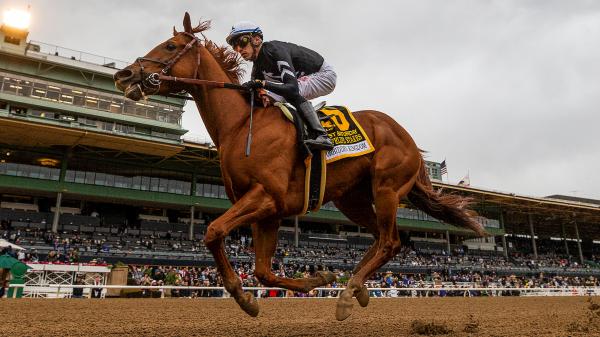 This feature provides a capsule look at three horses who are heating up on the Triple Crown trail and three horses whose chances for the Kentucky Derby Presented by Woodford Reserve are not quite as strong as they were a few weeks ago.

In this edition, the focus is the 3-year-old stakes races that have taken place over the last three weeks. With the action on the Derby trail heating up, this column will now appear regularly to analyze to biggest movers approaching the first leg of the Triple Crown.

Although the 100-point Kentucky Derby prep races have not started yet, I can honestly say that it feels like there is as little clarity as it pertains to this year’s 3-year-old class as I can ever remember. Last year’s TVG Breeders’ Cup Juvenile Presented by Thoroughbred Aftercare Alliance has thus far looked like a dud, Bob Baffert’s horses remain ineligible, and many of the top Triple Crown trail hopefuls have at least one flaw, whether distance limitations, low speed figures, lack of focus, etc.

While I have my concerns about Forbidden Kingdom’s ability to excel at the 1 ¼ miles of the Kentucky Derby, I don’t have any questions about his ability or his connections. He’s a fast 3-year-old trained by one of the best horsemen in Thoroughbred racing in Hall of Famer Richard Mandella. I sometimes have a tendency to overrate Mandella’s horses simply because I know they receive world-class care and he does not enter horses in stakes races he does not think they can win. After winning the Grade 2 San Vicente Stakes in January in a seven-eighths of a mile sprint at Santa Anita Park, Forbidden Kingdom was tested by Mandella around two turns in the 1 1/16-mile, $400,000 San Felipe Stakes on March 5 at Santa Anita. He led from start to finish in a 5 ¾-length runaway that produced a career-best 98 Beyer Speed Figure and 102 Brisnet speed rating. He came home rather slowly after setting a very strong pace through a half-mile in :45.90 and his pedigree, specifically his dam (mother), Just Louise, seems best suited to sprinting.

But my concerns were somewhat assuaged by a solid 9 on the Ragozin sheets. If he takes a small step forward in each of his next two races, Forbidden Kingdom could find himself in the winner’s circle on Derby day May 7. He’ll also have to summon the stamina to carry his speed another three-sixteenths of a mile.

Morello handled a significant class test in the Grade 3 Gotham Stakes March 5 at Aqueduct, where he improved to 3-for-3 with a 4 ½-length runaway win as the even-money favorite. Prior to that one-mile race, he had won a three-quarter-mile maiden race by 4 ¼ lengths and the seven-eighths of a mile Jimmy Winkfield Stakes by five lengths, both at Aqueduct. While the final time of the Gotham was nothing to write home about, I watched the race a few extra times and I think there is something there with Morello that might be brought out once he’s challenged. The speed figures also were a bit better than I expected as he earned a 96 Equibase Speed Figure, which equaled his career best, and a new top Beyer Speed Figure (96) and Brisnet rating (99). Those at least are in the ballpark of what it most likely will take to compete in the final round of major Kentucky Derby preps. However, as it stands, it is difficult to get enamored of a Gotham winner whose final quarter-mile was more than 26 seconds in a one-turn mile race. He’ll need to finish significantly faster for Hall of Fame trainer Steve Asmussen as the races get longer.

At this point I would peg Simplification as a slightly better 2022 Kentucky Derby contender than the aforementioned Morello, but the latter made a bigger jump while Simplification’s class was a little more established prior to his 3 ½-length win in the Fasig-Tipton Fountain of Youth Stakes March 5 at Gulfstream Park. He entered the Fountain of Youth off a runner-up finish in the Holy Bull Stakes, which followed a season-debut win in the Mucho Macho Man Stakes. In fact, he’s been extremely consistent this year in his three races with a string of 98-95-93 Equibase Speed Figures, Beyer Speed Figures of 90-91-96 and 99-92-95 Brisnet speed ratings. There is also some versatility to the Not This Time colt as he posted a front-running win in the Mucho Macho Man and closed from seventh with a sweeping rally in the Fountain of Youth. Considering he was at least six or seven paths wide on the final turn in the Fountain of Youth, his final sixteenth of a mile in 6.64 seconds is probably better than it looks. However, he has had issues switching from his inside lead on the turn to his outside lead in the stretch, and that seems to be limiting his closing kick. Correcting the lead change could be the difference in a placing or two as the competition gets tougher.

Honorable Mention: I profiled Classic Causeway after his victory in the $250,000 Sam F. Davis Stakes Feb. 12 at Tampa Bay Downs for a past Kentucky Derby Hopeful Snapshots blog. He had finished in the top three in a pair of key 2-year-old stakes in 2021 before a breakout 3 ¾-length win in the Sam F. Davis, and he dominated again on March 12 with a 2 ½ -length win in the Lambholm South Tampa Bay Derby. I’m not sure we learned a ton from the Tampa Bay Derby win, which earned Classic Causeway good but not great speed figures. Specifically, his 84 Beyer Speed Figure was well below what it would take to win the Kentucky Derby. He looks like a very nice 3-year-old for trainer Brian Lynch, but he needs to take a step forward in the April 9 Toyota Blue Grass Stakes at Keeneland to move into the top tier of Derby candidates. … I gave strong consideration to Un Ojo for one of the top three spots simply because his win in the Grade 2 Rebel Stakes Feb. 26 at 75.40-1 odds was so surprising. Sure, he had finished second in the Grade 2 Withers Stakes in his previous start, but he was 4 ½ lengths behind the winner in a Derby prep race on a muddy track that most analysts had largely dismissed. There is no denying the Laoban colt took a massive step forward in winning the Rebel, improving his top Brisnet, Beyer, and Equibase Speed Figures by from six to 17 points, but he still has significant ground to make up on the best 3-year-olds of 2022. On the bright side, this year’s group of 3-year-olds has not produced any world-beaters to date and very few breakouts stars at all.

Major General was 2-for-2 as a 2-year-old, including a victory on the host track of the Kentucky Derby when winning the Grade 3 Iroquois Stakes by a neck in September at Churchill Downs. In his return from a layoff of more than 5 ½ months in the March 12 Tampa Bay Derby, Major General had some ground to make up on the rest of his division but he stumbled pretty badly at the start, lost vital tactical positioning, and never threatened while finishing last of 10, beaten by 25 lengths. I think the poor start and disappointing performance both are forgivable and it might be worth just drawing a line through this race – I don’t believe it is indicative of the Constitution colt’s ability. At the same time, I’m not sure he got much, if anything, out of the race and with a little more than seven weeks to the Kentucky Derby it very likely takes Major General out of contention for the run for the roses. Stranger things have happened, but it’s hard to see how he finds his way into the Kentucky Derby starting gate on May 7.

This Connect colt from the barn of trainer Kenny McPeek had not raced since winning the Grade 1 Claiborne Breeders’ Futurity by 4 ½ lengths last October at Keeneland. He returned March 5 in the Fasig-Tipton Fountain of Youth Stakes and turned in a dull effort, never really factoring in the race while beaten by 7 ½ lengths. When talented 2-year-olds don’t return to the races until late February and early March, there is very little margin for error. After the sixth-place finish, McPeek told Daily Racing Form believes Rattle N Roll needed the race after a long layoff and he plans to bring him back in three weeks for the $1 million Twinspires.com Louisiana Derby at 1 3/16 miles. His Breeders’ Futurity win likewise came on short rest, but either way it was not a smashing season debut for Rattle N Roll in the Fountain of Youth … it was more like a sound check. Let’s hope he finds his rhythm.

So far in this blog I’ve largely ignored the 3-year-olds from trainer Bob Baffert’s barn as they are not eligible to earn qualifying points and ineligible for the Kentucky Derby due to Medina Spirit’s disqualification in 2021. Over the last few weeks, I have not heard of any Baffert-trained 3-year-olds being transferred to different trainers to prep for the Derby, Baffert’s legal appeals have not gained any traction, and his runners have frankly disappointed on the racetrack. Southwest Stakes winner Newgrange ran sixth as the 4-5 favorite in the Rebel Stakes Feb. 26; Grade 3 winner Rockefeller shipped to New York and was last of 10 in the Gotham Stakes on March 5; and Forbidden Kingdom overwhelmed six runners, including a pair of Baffert 3-year-olds, in the San Felipe Stakes March 5. It’s possible a 3-year-old from Baffert’s barn could move to a different trainer and still make the Kentucky Derby, but it looks increasingly unlikely considering where we stand in the middle of March.