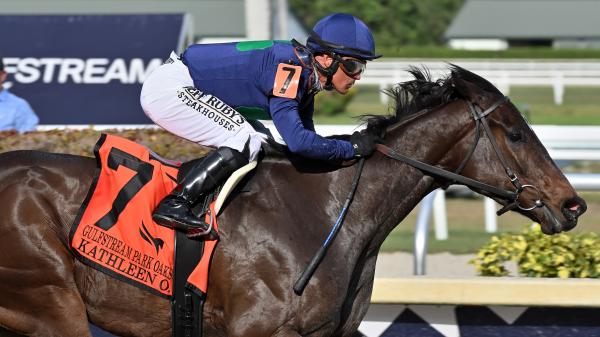 Welcome to 2022 Kentucky Oaks Prospect Snapshots, where I profile contenders for the May 6 Longines Kentucky Oaks at Churchill Downs, the female equivalent of the Kentucky Derby Presented by Woodford Reserve. We’re less than two weeks out from this year’s race, and anticipation continues to build for what looks like one of the most stacked Oaks fields in a while.

This week we’ll take a look at the possible favorite, Kathleen O. She’s been perfect in four career starts so far, and carries her undefeated streak and a lofty reputation into the first Friday in May.

Racing Résumé: Kathleen O. made waves in her debut, a seven-furlong maiden special weight race over a muddy track at Aqueduct on Nov. 12, 2021. She raced at the back of the seven-horse field in the early stages before launching her move on the far turn. As the field passed the eighth pole, the Upstart filly remained 6 ½ lengths behind the leaders and looked hopelessly beaten. However, she exploded late and rallied to win in a photo finish.

In her next start, Kathleen O. made her stakes debut in the Cash Run Stakes at Gulfstream Park on New Year’s Day. Once again, she rallied from off of the pace and won by 8 ½ lengths going away. She picked up another stakes win on March 5, taking the $200,000, Grade 2 Davona Dale Stakes Presented by FanDuel by two lengths after striking the front in the last eighth of a mile.

For her final Oaks prep, Kathleen O. competed in the $250,000, Grade 2 Gulfstream Park Oaks on April 2. She was well-backed at the betting windows, going off as the overwhelming 1-2 favorite in a field of six. As usual, the filly rated towards the back early on, although she was just a few lengths off the pace in a tightly-bunched field. She made her move on the final turn, and passed her two-turn test with flying colors in a 2 ¾-length victory.

Speed Figures: Kathleen O.’s recent speed figures are among the best in the prospective Kentucky Oaks field. She ran an Equibase Speed Figure of 95 in the Davona Dale and a 100 in the Gulfstream Park Oaks. That 100 is tied for the second best last-out figure with Santa Anita Oaks winner Desert Dawn. Only Nest, who earned a 106 in the Central Bank Ashland Stakes, will go into the Oaks with a higher Equibase figure.

The Beyer Speed Figure scale is more favorable towards Kathleen O. Although she ran a rather pedestrian 85 in the Davona Dale, she improved sharply in the Gulfstream Park Oaks to a figure of 98. That’s six points higher than any other Oaks contender ran in their final prep, and two points higher than the Beyer earned by White Abarrio in the Curlin Florida Derby Presented by Hill ‘n’ Dale Farms at Xalapa later that day at Gulfstream Park.

Running Style: As mentioned above, Kathleen O. has a very exciting running style. She always comes from well off the pace, seizes control in the stretch, and draws off to victory. In the Cash Run and the Davona Dale, she burst away from the field once she had clear sailing and did not meet much resistance. She had to work a little bit to get by Goddess of Fire on the lead in the Gulfstream Park Oaks, but that rival faded late and Kathleen O. pulled clear in the end.

Connections: Kathleen O. is owned by Winngate Stables, the nom de plume of retired lawyer Pat Kearney. Kearney, a longtime racing fan, got involved in horse ownership last year on the recommendation of his friend, Hall of Fame trainer Shug McGaughey. Kearney purchased Kathleen O. for $275,000 at the 2021 Ocala Breeders’ Sale of 2-Year-Olds in Training. He named the horse after his wife Kathleen, whose maiden name was O’Boyle. Kathleen O. is one of two horses owned by Kearney. The other, Cloudy, was unplaced in two starts at Churchill Downs last fall and recently returned to the worktab.

Shug McGaughey is one of the most successful trainers in American racing history. McGaughey has won two Triple Crown events, nine Breeders’ Cup races, and the Eclipse Award for Outstanding Trainer in 1988. The Lexington, Ky., native has campaigned numerous top female horses, including the undefeated champion Personal Ensign, Inside Information, Heavenly Prize, and Storm Flag Flying. McGaughey won the Kentucky Oaks in 1993 with Dispute. As noted above, McGaughey helped pick Kathleen O. out for Kearney at the sale last spring.

Kathleen O. has been ridden by Javier Castellano in all four of her starts so far. A 2017 Hall of Fame inductee, Castellano is one of the most accomplished riders in the country, with more than 5,480 career wins and $367 million in earnings to his credit. The four-time Eclipse Award winner won the Oaks in 2016 with Cathryn Sophia.

Kathleen O.’s dam is Quaver, who was stakes-placed on grass as a 3-year-old in 2015. Her damsire is Blame, the 2010 Breeders’ Cup Classic winner. Millionaire, Grade 1 winner and sire Cupid is a close relative to Kathleen O. from her female family.

Oaks Potential: Kathleen O. has tons of upside going into the Oaks and may very well go off as the post-time favorite. She hasn’t run a bad race yet, showing great closing speed every time out and winning impressively in all four of her starts. The filly has a top trainer and a top jockey and will be primed for this race. Her biggest impediment may be trying to close in a big field. She’s never raced against more than six rivals, and might get stuck in traffic in the midst of her rally. Still, she’s overcome trouble to win before, so it shouldn’t be a big issue. No one would be surprised if Kathleen O. made it 5-for-5 on the first Friday in May.