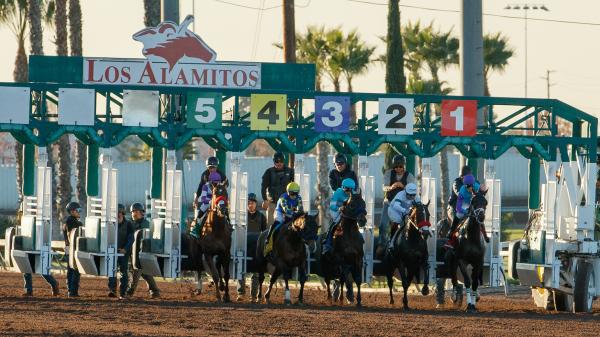 2022 Los Alamitos Futurity at a Glance

West Coast action on the road to the 2023 Kentucky Derby Presented by Woodford Reserve picks up Saturday with the 41st running of the Los Alamitos Futurity. The 1 1/16-mile race for 2-year-olds was held at Hollywood Park from its inception until that track was permanently closed at the end of 2013, and since then the Grade 2 stakes been the centerpiece (along with the Starlet Stakes for juvenile fillies) of Los Alamitos’ brief winter Thoroughbred meet.

Bob Baffert is easily the all-time winningest trainer of the Futurity with 13, and he’s dominated the race since it moved to Los Alamitos, winning seven editions in a row until Slow Down Andy defeated his colt Messier last year. Baffert has three of the five entered in Saturday’s running as he vies for victory number 14.

Leandro Mora, assistant to Doug O’Neill, takes over training duties for this colt while O’Neill serves a suspension for a medication positive. Still a maiden, Tall Boy has made three starts – all in sprints – and had trouble early in each of them. He recovered to rally and hit the board in his two most recent races, and could perhaps nab third Saturday if the early pace is blazing … but that’s probably about it.

The first of three Baffert trainees broke his maiden in his second career start at Del Mar back in late August by controlling the pace. He jetted off to a 8 ¾-length score in that one-mile race but then shipped to Keeneland for the Claiborne Breeders’ Futurity in October and tired after six furlongs, finishing 13th of 14. He’s had some good workouts since coming back to SoCal and should be prominent early, perhaps even setting the pace.

This son of Tapit has finished first in the most recent two of his three career starts, but was disqualified and placed second in his two-turn debut back in October at Santa Anita Park after bumping rival Practical Move in the stretch. He rebounded to score going gate-to-wire in a 1 1/6-mile race Nov. 4 at Santa Anita and gets Flavien Prat aboard for the first time. Arabian Lion’s presence may boost this colt’s value as a win candidate.

Practical Move’s only win in four career appearances came when Fort Bragg was DQ’d (see above). He’s hit the board in all of his races despite poor starts every time, is bred to handle racing around two turns, and has the best chance of toppling one of Baffert’s contenders and scoring the upset … which isn’t saying much in this tiny field.

One of the top buzz horses on the Derby trail, this son of Triple Crown winner Justify has been bet down to less than even-money in both of his starts. He romped by three lengths in a six-furlong maiden Oct. 9 at Santa Anita and then ran well but settled for second by three-quarters of a length to Giant Mischief in a seven-furlong allowance at Keeneland on the Breeders’ Cup Future Stars Friday undercard Nov. 4. His Equibase Speed Figure of 100 in that race is easily the best in this Los Al Futurity field, and if he can match or improve on it he’ll be tough to beat.

2022-12-16
Previous Post: Jackpocket Joins the Gift Responsibly Campaign for Fifth Year in a Row
Next Post: US Gambling Hits $5.3 Billion in October • This Week in Gambling