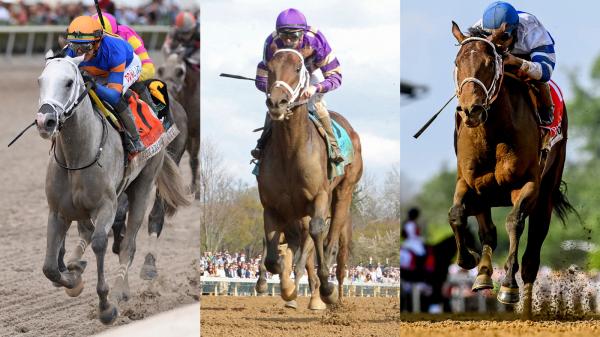 Triple Crown season may be over, but the racing action for 3-year-old colts and geldings continues to sizzle. This Saturday marks the start of the 3-year-old summer racing season, as a field of eight will contest the $500,000, Grade 3 Ohio Derby at Thistledown, near Cleveland. Three of the horses in this race competed in the Kentucky Derby Presented by Woodford Reserve, while a fourth, Ethereal Road, was entered in the run for the roses but scratched the day before.

The Ohio Derby is the signature race of the Thistledown season. It was initially held in 1876, and after a few stops and starts, has been held annually since 1952. The race has maintained its Grade 3 status and 1 ⅛-mile distance since 2017.

Let’s meet the field for this year’s Ohio Derby.

1. Barese (9-2): Mike Maker has entered two New York-breds in here; Barese is the more accomplished one. Four of his five career starts have come against state-bred competition. He started his career a perfect 3-for-3, including a win in the Gander Stakes at Aqueduct, before finishing fifth in the Wood Memorial Presented by Resorts World Casino. In his most recent start, he finished a shocking third as the odds-on choice in the New York Stallion Stakes in late April. He’s shown promise but will need to rebound big-time off that last race.

2. Brigadier General (12-1): It took seven tries, but this bay son of Street Sense finally broke his maiden at Keeneland in mid-April. Most recently, he finished off the board in a first-level allowance race at Churchill Downs. He’s never run a speed figure that is competitive with his opponents Saturday and is taking a major step up in class. Reylu Gutierrez has the mount for the first time.

3. Droppin G’s (8-1): This colt bears some resemblance to this year’s surprise winner of the Kentucky Derby Presented by Woodford Reserve, Rich Strike. He spent his winter at Turfway Park, he likes to come from off the pace, and he was well-beaten in his last start. He was a non-threatening presence in the aforementioned last race, the Matt Winn Stakes at Churchill, and wheels back off a 13-day layoff. He’s also never run a figure competitive with the best in this race. If there’s a fast pace, that will benefit him. His rider, Malcolm Franklin, is one of two jockeys in this race who rides regularly at Thistledown. Trainer Jerry Antonuik looks for his first stakes win here.

4. Ethereal Road (4-1): He was scratched from a scheduled start in the Kentucky Derby the day before the race, enabling longshot winner Rich Strike to draw in. Last out, he came from off the pace to win the Sir Barton Stakes at Pimlico. He was one of the few horses who came from behind and raced well at Pimlico that day. A quarter crack knocked him out of a planned start in the Belmont Stakes Presented by NYRA Bets, but he’s recovered in time for this race. He has a strong closing kick and looks like he’s been getting better as the year goes on. Hall of Fame trainer D. Wayne Lukas won this race in 2015 with Mr. Z.

5. White Abarrio (7-2): He’s the second choice on the morning line for this race, but it would not surprise anyone if he went off as the favorite. This striking gray colt has been dominant in Florida, winning his four starts at his home base of Gulfstream Park by a combined 16 ½ lengths. His most notable win came in early April, when he prevailed in the Curlin Florida Derby Presented by Hill ‘n’ Dale Farms at Xalapa by 1 ½ lengths. However, he finished third in the Kentucky Jockey Club Stakes at Churchill last November, then raced wide in the May 7 Kentucky Derby and was well-beaten. He’s shown plenty of potential and is the most accomplished member of the field. This will be a big test for him as he seeks to prove he can win outside of Florida.

6. Pineapple Man (10-1): The other Maker entrant in the field makes his first start against open company in this race. He’s won once from five starts, going gate-to-wire to win a New York-bred maiden race at Aqueduct in mid-February. Since then, he’s set the pace and faded to second in two consecutive starts. He’ll be a factor on the early pace but is unlikely to hang around late.

7. Tawny Port (3-1): The slight morning-line favorite earned his first graded stakes victory two starts back when he won the Stonestreet Lexington Stakes at Keeneland by a length. Last out, he closed from well off the pace in the Kentucky Derby and finished seventh. He’s improving at the right time and will be heard from late. Irad Ortiz Jr. has the mount for the first time. Brad Cox won this race in 2019 with Owendale.

8. Classic Causeway (6-1): Earlier in the year, Classic Causeway looked like one of the top 3-year-olds in the country. He cruised to impressive wins in the Sam F. Davis Stakes and the Lambholm South Tampa Bay Derby, setting the pace and drawing off both times. However, he was well-beaten in his next two starts, losing the Florida Derby and the Kentucky Derby by a combined 38 ¼ lengths. He gets a new jockey and a new trainer, in Brian Hernandez Jr. and Ken McPeek, respectively. He doesn’t have a great post draw with some speed horses to his inside, but he has plenty of back class. If you still believe, you’ll get a good price. McPeek won this race in 2003 with Wild and Wicked.