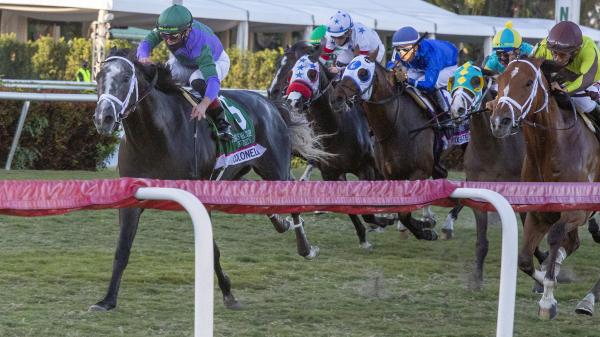 The Pegasus World Cup Turf Invitational Stakes Presented by Baccarat and the featured Pegasus World Cup Invitational Stakes have the same basic storyline. In both rich stakes, the 2021 winner will be on hand to bid for an encore victory. In the Pegasus Turf, it’s Colonel Liam who will attempt to go back-to-back – much like Knicks Go will in the dirt race – when he will face 11 formidable rivals in the nationally televised race on NBC.

1. Space Traveller (12-1): Breaking from post 12 in the Fort Lauderdale Stakes – the prep for this race – and travelling wide didn’t help his cause. Now he’ll get a ground-saving trip from the rail. He also adds blinkers which might keep him closer to the pace and spark an improved effort.

3. Flavius (15-1): He’s the second of Maker’s four entries and will be making his first start for the trainer after the 7-year-old was purchased by new owners. He was a consistent runner for Chad Brown, but will need a lot to go right for him in order to collect his first graded stakes win in this spot.

4. March to the Arch (20-1): A mile is his forte, but perhaps the extra furlong will help his late-running style. He won a Woodbine stakes at this distance last summer but came up empty last time out at Aqueduct, also in an ungraded stakes. He’s working very quickly for this start, but he seems a notch below the best ones here.

5. Hit the Road (8-1): He’s run on turf 11 times, all at a one-mile distance. With his late kick, it figured he would eventually tackle this distance. He’s been away from the races since early October but has been putting in solid works and a Grade 1 win last year in the Frank E. Kilroe Mile indicates he merits respect here.

6. Colonel Liam (3-1): He had a chance to be the champion male turfer last year until an injury ended his year in June. Returning from a nearly eight-month-long layoff can be a challenge, but Hall of Fame trainer Todd Pletcher gives his horses highly useful workouts. He should be ready for a strong showing, but in a field this big, there’s always the fear of a rough trip for the favorite.

7. Doswell (10-1): He won the Fort Lauderdale on the front end for veteran trainer Barclay Tagg and is a threat to go gate-to-wire here as well, except that he will face early pressure from Never Surprise and probably Channel Cat. He’s a game 7-year-old and should be a factor throughout, but the fractions may not work out in his favor Saturday.

8. Sacred Life (6-1): A sluggish start and wide trip hurt him in the Grade 2 Seabiscuit Handicap, yet he’s a consistent sort who usually brings home a check. The distance figures to suit him and he’s a main threat.

9. Field Pass (10-1): He opened a nice lead in mid-stretch of the Seabiscuit and barely held off Sacred Life. He should be able to rate off the early leaders under another excellent turf jockey in Umberto Rispoli and with some luck could be the one that punches Maker’s return ticket to the winner’s circle.

10. Channel Cat (12-1): He’s been showing speed in longer races so it will be interesting to see where he’s placed in the early stages. He’s a proven Grade 1 winner but with only six wins in 30 starts, it’s hard to back him in the win pool. The exotics are a different matter.

11. Cross Border (15-1): The fourth Maker starter seems to have lost a step now that he’s 8. His speed figures dipped last year from 2020 and it’s hard to believe that at his age, and from post 11, he’ll register a dramatically better effort here.

12. Never Surprised (7-2): It will be no surprise if he’s in front early. With his early speed and post 12, he’ll need to break quickly and dart inside to save ground on the first turn. That could happen but there’s enough speed in this field to foster a belief he’ll have to work hard to do that and it will catch up with him in the final furlong.