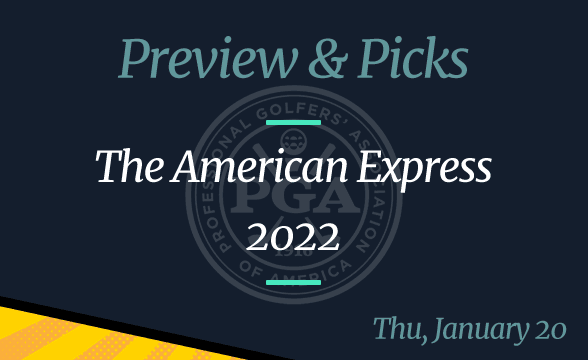 Previously known as the Bob Hope Classic, the 2022 PGA Tour the American Express is the first PGA-sanctioned event of the year to take place in mainland United States. After two tournaments held in Hawaii, the tour is heading to California – the event is taking place at La Quinta Country Club in the Coachella Valley.

The event is scheduled to start on Thursday, January 20, 2022, the same day when the 2022 Abu Dhabi HSBC Golf Championship tees off. A number of golfing superstars have picked the UAE event over the one taking place in America including Rory McIlroy and Colin Morikawa.

However, the #1 ranked player in the Official World Golf Ranking, Jon Rahm, is going to take part in The American Express tournament. Oddsmakers see him as the favorite to win the event, although the odds on the Spaniard aren’t as short as you’ve thought.

Another Great Year for Jon Rahm?

Rahm is coming off a fantastic year which saw him winning the 2021 US Open, thus becoming the first Spanish golfer to do so. The same year, he was crowned the PGA Player of the Year award for the 2020-21 season.

The new season started in September, but Rahm still hasn’t done much. In fact, he’s still without a win at a PGA Tour event in the 2021-22 season. The Spanish golfer, however, did come very close to winning the Sentry Tournament of Champions on January 9.

However, Australian player Cameron Smith ruined his plans, finishing on 34 under par in comparison to Rahm’s 31 under par.

Another chance to get ahold of the first PGA Tour title of the year comes for Rahm this week. He’s coming to The American Express tournament as the #1 favorite to win it for the second time in his career. Previously, he did it in the 2018 edition of the event.

Patrick Cantlay In the Mix

Cantlay finished second in the last year’s tournament, in which we saw him 61 in the final round. That wasn’t enough to leapfrog Kim Si-woo, but it did serve as a great start of the year for Cantlay.

From there, he went on to win three PGA Tour events, earning himself the PGA Tour Player of the Year award for 2021.

His last major outing in 2021 was at the Ryder Cup where he was part of the American team, which beat Team Europe. Cantlay did great, going 3-0-1 and defeating his singles’ opponent Shane Lowry.

In 2022, he’s played one tournament so far – Sentry Tournament of Champions, which is where we saw him finish fourth.

In his second tournament of the year, he’s expected to do better. However, the question is whether he can actually win the title, especially knowing that Jon Rahm has exactly the same plan on his mind.