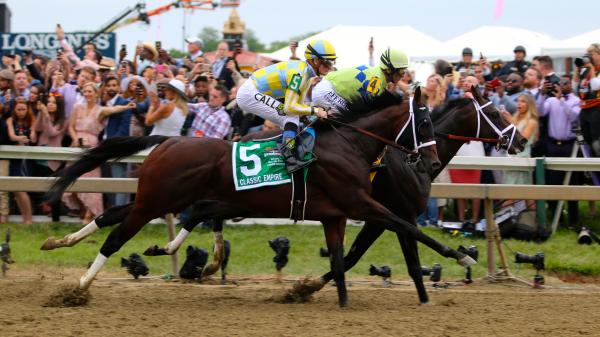 2022 Preakness Stakes by the Numbers

On May 21, Pimlico Race Course will host the second jewel of North American horse racing’s Triple Crown, as a talented group of 3-year-olds (minus the Kentucky Derby Presented by Woodford Reserve winner) will contest the Preakness Stakes.

The historic race is one of the most important in determining champion 3-year-old male honors at year’s end, even if a Triple Crown is not on the line. Get get ready for this year’s running with some fun stats and facts below.

1 3/16 miles – The distance of the Preakness since 1925. It’s a sixteenth of a mile shorter than the Kentucky Derby.

1:53 – Secretariat’s winning time in the 1973 edition of the Preakness, a stakes record. The race was originally timed in 1:54 2/5, but that error was corrected in 2012, giving “Big Red” the stakes record for all three Triple Crown races.

2 – The number of people who have both ridden and trained a Preakness winner. Louis J. Schaefer won the 1929 edition as a jockey aboard Dr. Freeland and later trained Challedon to victory in 1939. Johnny Longden duplicated the feat by winning the 1943 Preakness on Count Fleet before training 1969 winner Majestic Prince.

6 – The number of fillies (females) who have won the Preakness: Flocarline, 1903; Whimsical, 1906; Rhine Maiden, 1915; Nellie Morse, 1924; and then an 85-year gap before eventual Horse of the Year Rachel Alexandra won in 2009. Swiss Skydiver became the sixth in 2020 when she outfinished Kentucky Derby winner Authentic to win an unforgettable Preakness.

11 – The number of times in its illustrious history that the Preakness Stakes was run prior to the Kentucky Derby, and twice, in 1917 and 1922, both races were on the same day.

15 – The number of Preakness winners whose name began with the letter ‘S’. These include the very first winner, Survivor (1873), Triple Crown winners Sir Barton (1919), Secretariat (1973), and Seattle Slew (1977), and Smarty Jones (2004). Another famous ‘S,’ Sunday Silence, is the most recent Preakness winner to prevail by the slimmest of recorded margins, a nose. He defeated Easy Goer in their classic 1989 rivalry by a nose. Swiss Skydiver in 2020 is the most recent winner whose name began with the letter ‘S’.

17 – The number of times a horse breaking from post position No. 6 has won the Preakness. Rombauer was the last to do so, in 2021.

18 – The race has been decided by a head or less on 18 occasions, the last such occurrence when Cloud Computing defeated Classic Empire by a head in 2017.

22 – The number of Preakness winners named Horse of the Year, racing’s highest year-end honor, the same year. Triple Crown winner Justify (2018) is the most recent such horse.

36 – Total number of horses who won the Preakness after a Kentucky Derby victory. Just 13 of them went on to win the Belmont Stakes and sweep the Triple Crown.

102 – The number of Preakness winners who were bred in Kentucky, including the last seven since California-bred California Chrome won the race in 2014.