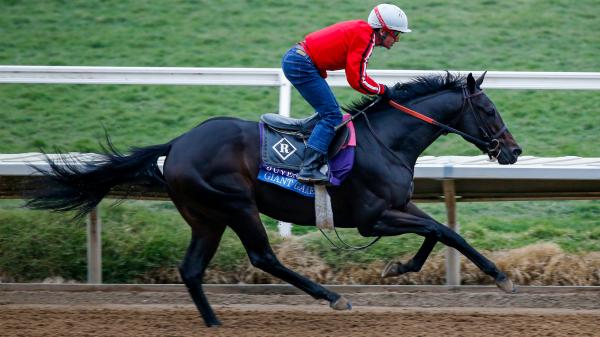 This season we’ve profiled a promising 3-year-old each week who made an impression on the Road to the 2022 Kentucky Derby Presented by Woodford Reserve. The goal of the Kentucky Derby Hopeful Snapshots blog is to introduce racing fans to horse racing’s next generation. Who are the sport’s rising stars and what makes them special?

This year, fans are in for a real treat and America’s Best Racing is partnering with Terry Finley and West Point Thoroughbreds for a fun “A Stake in Stardom” initiative in which a newcomer to the sport experiences first-hand the roller-coaster ride of racehorse ownership.

Cline is a New York City-based musical theatre performer and one of the main faces of CrownTok, a niche TikTok group of individuals who collect crowns and empower one another to harness their “Queen Energy.” She will take racing fans behind the scene with Giant Game for his exciting 3-year-old season, so let’s learn a little more about the Giant’s Causeway colt.

Racing Résumé: Giant Game was one of the top 2-year-olds in the United States in 2021, rolling to a three-length runaway in his second start at Keeneland in October 2021 and then finishing third in the $2 million 2021 TVG Breeders’ Cup Juvenile presented by Thoroughbred Aftercare Alliance Nov. 5 at Del Mar.

He has yet to replicate that form in 2022 after he displaced his soft palace during the Holy Bull Stakes in his 3-year-old debut Feb. 5. His connections subsequently took steps to correct the breathing issue but they believe it resurfaced when Giant Game was unplaced March 12 in the Lambholm South Tampa Bay Derby.

Speed Figures: Giant Game earned a career-best 90 Equibase Speed Figure and a career-top 99 Brisnet speed rating for his third-place finish in the 2021 Breeders’ Cup Juvenile. He will need to regain his top form and most likely improve upon those speed figures to be a top contender on the 2022 Triple Crown trail.

Running Style: Giant Game prefers to rate off the pace in a stalker-closer position and make one sustained bid at the leader when given his cue. He showed the ability to press the pace in his maiden win but rallied from farther back in the Breeders’ Cup Juvenile, so he has some versatility depending upon how a race develops.

Connections: Giant Game is owned by the partnership of West Point Thoroughbreds and Albaugh Family Stables.

Albaugh Family Stable is the Des Moines, Iowa-based racing operation of Jason Loutsch and Dennis Albaugh, who mortgaged his home to start his own pesticide company Albaugh Inc. Notable runners campaigned by the Albaugh family include Grade 1 winners Brody’s Cause, Juju’s Map, and Free Drop Billy as well as graded stakes winners Not This Time, Thousand Words, Dennis’ Moment, and J Boys Echo.

Trainer Dale Romans is a Louisville native and the son of trainer Jerry Romans. Dale has won more than 2,100 races during an illustrious career that saw him earn his first stakes win in 1991 with Morning Punch and his first Grade 1 win in the 2004 Whitney Handicap with Roses In May. Romans won the Preakness in 2011 with Shackleford and has trained the Preakness runner-up three times. Romans twice finished third in the Kentucky Derby with Paddy O’Prado in 2010 and Dullahan in 2012.

Giant Game has been ridden by three different jockeys so far in his career. Joe Talamo rode him for his three races as a 2-year-old. Luis Saez was aboard for the Holy Bull; Samy Camacho rode Giant Game in the Tampa Bay Derby.

Pedigree Notes: Giant Game is by three-time leading sire Giant’s Causeway, the 2000 European Horse of the Year who developed into one of the most important stamina influences in the United States in his second career as a stallion. Nicknamed “The Iron Horse,” Giant’s Causeway has sired 216 stakes winners and 122 graded/group stakes winners through March 14, including 2019 Horse of the Year Bricks and Mortar and European champion and influential sire Shamardal among a long list of standouts. Giant’s Causeway died at age 21 in April 2018.

Giant Game’s dam (mother) is Game for More, by More Than Ready. She placed in four stakes races, including three at one mile or longer, and amassed more than $150,000 in purse earnings over four seasons while finishing in the top three in 12 of 20 starts. Game for More also has enjoyed success in her second career as a broodmare, producing multiple graded stakes winner Isotherm and Grade 1-placed winner Gio Game.

Potential: Giant Game showed exciting talent as a 2-year-old that offered plenty of reason for optimism. He has not been able to replicate that thus far as a 3-year-old, but given the breathing issues that arose in the Holy Bull Stakes there is a very good chance we should expect a return to his best in the near future. Improvement and maturation in horse racing are rarely linear, so the hope is that with a few adjustments Giant Game will again flash the ability that he displayed in late 2021.