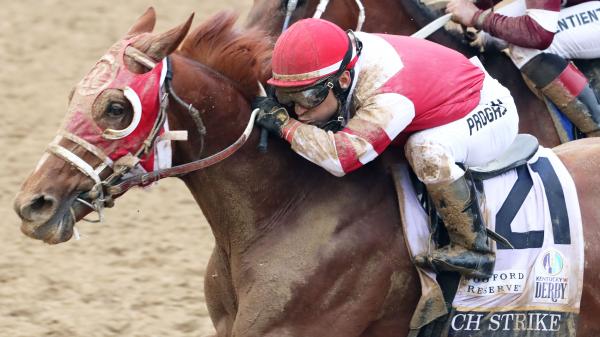 Welcome to 2022 Triple Crown Hopeful Snapshots, where we’ll take a look each week at a recent winner on the Triple Crown trail. Through the end of April, prospects were profiled based on their wins in Road to the Kentucky Derby prep races.

However, this week the focus is, of course, on Rich Strike, the 80.80-1 upset winner of the 1 ¼-mile, $3 million Kentucky Derby Presented by Woodford Reserve May 7 at Churchill Downs.

Racing Résumé: As you might expect from a colt who won the Kentucky Derby at 80.80-1 odds, his résumé entering the race was not as strong as most of his opponents in the first jewel of the Triple Crown. In fact, Rich Strike’s only previous win was a 17 ¼-length victory in a maiden claiming race in September 2021 at Churchill Downs, where trainer Eric Reed claimed him for $30,000 on behalf of owner Richard Dawson’s RED-TR Racing. No other Kentucky Derby winner in 147 previous editions had even been claimed, and only two others are believed to have even competed in a claiming race (Charismatic, 1999; Mine That Bird, 2009).

Reed said after the Derby that he thought Rich Strike could improve when switching from turf to dirt after running last of 10, beaten by more than 14 lengths in his career debut on grass Aug. 15 at Ellis Park.

Rich Strike did not win again, remarkably, until he crossed the finish line first in the Kentucky Derby. In his three starts in 2022, the chestnut colt finished third in the Leonatus Stakes, fourth in the John Battaglia Memorial Stakes, and third in the Jeff Ruby Steaks, all on the synthetic Tapeta Footings surface at Turfway Park. In his final prep race for the Kentucky Derby, he finished 5 ¾ lengths behind Tiz the Bomb at 26.20-1 odds in the Jeff Ruby.

Much has been made about the fact that Rich Strike needed the late scratch of Ethereal Road just to draw into the Kentucky Derby from the also-eligible list at the final hour, but on the April 28 leaderboard sent out by Churchill Downs Rich Strike was in 24th position and also needed the connections of Un Ojo, Early Voting, and In Due Time to bypass the race to get in to the 20-horse field.

Once he did, Rich Strike (as an also-eligible entrant drawing into the race) broke from the far outside post position in the field of 20, a post that had produced only one other winner, Big Brown in 2008. Rich Strike closed from more than 17 lengths off the pace under a simply masterful ride from jockey Sonny Leon to reel in favored Epicenter and Toyota Blue Grass Stakes winner Zandon in deep stretch and add the ultimate jewel to his racing résumé. He also authored the second biggest upset in Kentucky Derby history and etched his name in the racing record books for eternity. Only Donerail at 91.45-1 in 1913 won the Kentucky Derby at higher odds than Rich Strike.

Speed Figures: Prior to the Kentucky Derby, Rich Strike’s best Equibase Speed Figure was a 96 earned for finishing third in the Jeff Ruby Steaks and his best number on dirt was the 77 he earned for his maiden claiming victory. His best Beyer Speed Figure was an 84 for the Jeff Ruby and his best Beyer number on dirt was a 65 for his lone previous win. He needed to take a significant step forward in the Kentucky Derby to even be a factor, and he did just that with a 106 Equibase Speed Figure and a 101 Beyer Speed Figure. He ran the race of his life in the most important race of his life.

Can he do it again in the Preakness? The big challenge is duplicating a performance like that on only two weeks rest. Perhaps, if the speed figures were a bit muted by competing all season on a synthetic surface, the Derby was more in line with what to expect moving forward having matured mentally and physically since his last previous dirt race Dec. 26, 2021 in the Gun Runner Stakes at Fair Grounds, where he finished 14 lengths behind Epicenter.

Running Style: Rich Strike is a deep closer who makes one sustained late rally in an attempt to pass as many horses as possible using stamina conserved early in the race. He passed every horse in front of him in the Kentucky Derby to earn a career-defining win.

Closers are dependent on how pace and traffic play out in a race. Typically, a fast, taxing early tempo better sets up a closer’s finishing kick and the he or she also needs to find a clear path to the finish line. Summer Is Tomorrow took care of the first part in the Derby with blistering opening quarter-mile in 21.78 seconds and a half-mile in 45.38 seconds. It was the fastest opening quarter in the Derby on record and the fifth-fastest half-mile. As for the traffic, jockey Sonny Leon handled that with aplomb by weaving his way through the field as shown by this overhead view of Rich Strike’s rally:

Connections: Rich Strike is owned by Richard Dawson’s RED-TR Racing. Oklahoman Dawson is semi-retired from the oil and gas industry and had won fewer than 10 races before taking the biggest one on the U.S. racing calendar May 7 at Churchill Downs. The Kentucky Derby was the first graded stakes win for both Dawson and jockey Sonny Leon.

For trainer Eric Reed, 57, Rich Strike’s Derby win was the second graded stakes victory of his career following Satans Quick Chick’s win in the 2009 Lexus Raven Run Stakes at Keeneland. Reed is based out of Mercury Equine Center in Lexington and has amassed more than 1,400 wins since taking out his license in 1985. Mercury suffered a tragic barn fire from a lightning strike that claimed the lives of 23 of their horses in 2016. Reed’s father, Herbert, trained for more than 40 years and learned under the guidance of Hall of Famer Mack Miller.

Sonny Leon, 32, landed by far the biggest win of his career with just a terrific ride on Rich Strike, earning his 13th career stakes victory and first in a graded stakes in Derby 148. So under-the-radar was Leon that he had to go over to Ohio to Belterra Park on Longines Kentucky Oaks day to pick up five mounts. The Venezuela native has 770 career wins through May 8 and has been the leading rider at Mahoning Valley for the past three years.

Pedigree Notes: Rich Strike is from the first crop of Keen Ice, ironically also best known for an unforgettable upset when he stunned Triple Crown winner American Pharoah in the 2015 Travers Stakes. Keen Ice at 16-1 odds collared the 0.35-1 favorite in deep stretch to beat American Pharoah by three-quarters of a length. Needless to say, Rich Strike is the leading earner for Keen Ice from only 92 starters to date.

Keen Ice, by two-time Horse of the Year Curlin, figures to be a strong source of stamina as a sire. He won two graded stakes at 1 ¼ miles and finished third in both the 2015 Belmont Stakes and 2016 Breeders’ Cup Classic.

Preakness Potential: When a major upset happens in the Kentucky Derby, there typically is much skepticism about the longshot’s chances in the Preakness Stakes. Of the four winners since 2000 who went on to compete in the Preakness after Kentucky Derby wins at 20-1 odds or higher, Animal Kingdom in 2011 was favored at a lukewarm 2.30-1 and War Emblem in 2002 at a tepid 2.80-1 (2019 upset winner Country House did not contest the Preakness). Mine That Bird in 2009 was the 6.60-1 third betting choice in the Preakness, while Giacomo also was the 6-1 third choice in 2005. All four ran well with War Emblem winning the Preakness, Animal Kingdom and Mine That Bird running second, and Giacomo finishing third.

War Emblem was a colt who preferred to race on or near the pace and pressed from second in his three-quarter-length Preakness win. Animal Kingdom, Mine That Bird, and Giacomo were, like Rich Strike, closers whose chances were more pace and traffic dependent.

It is difficult to return from a career-best race with another top performance on short rest, in this case two weeks, but recent history suggests that Rich Strike probably will run well May 21 at Pimlico. Whether or not he can win, however, perhaps depends on him getting another terrific ride from Sonny Leon and a solid pace to set up his finishing ability. I would not count Rich Strike out, but I do think the more likely outcome is a late rally to finish in the top two to four positions but no Triple Crown bid June 11 at Belmont Park.