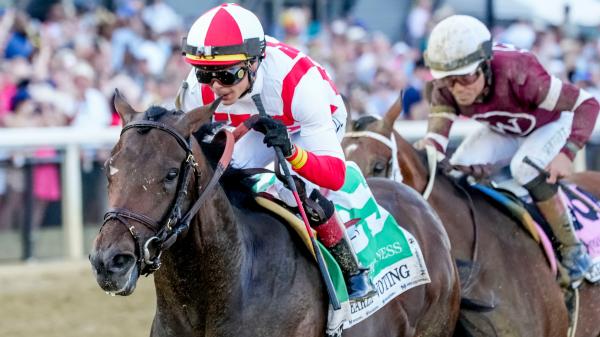 Welcome to 2022 Triple Crown Hopeful Snapshots, where we’ll take a look each week at a recent winner on the Triple Crown trail, usually from the Road to the Kentucky Derby schedule from which the racehorses earn points toward qualifying.

Racing Résumé: Improvement is common in 3-year-old racehorses as they begin to develop mentally and physically and start to fully understand what they are being asked to do on the racetrack and how to accomplish it. That progress is not always linear, but in Early Voting’s case his evolution into an elite Thoroughbred has been quite steady.

The Gun Runner colt pressed the pace in his career debut in December 2021 at Aqueduct and pulled away to a clear win before dominating from start to finish in a 4 ½-length romp in the Feb. 5 Withers Stakes. Early Voting suffered the first loss of his career when Mo Donegal caught him in the closing strides of the Grade 2 Wood Memorial Stakes Presented by Resorts World Casino April 9, but he showed plenty of grit late in that race and earned enough points to qualify for the Kentucky Derby Presented by Woodford Reserve.

Trainer Chad Brown, a protégé of the late hall of Famer Bobby Frankel, has shown in the past that he subscribes to Frankel’s theory of proper spacing between races to increase the chances for a top performance. Early Voting’s connections opted to bypass the Derby in favor of the Preakness Stakes May 21 and the extra two weeks of rest certainly did not hurt. A fresh Early Voting took command from pacesetter Armagnac on the final turn at Pimlico and spurted to a clear lead. He maintained that advantage and had enough stamina in reserve to hold off a late rally from Kentucky Derby runner-up Epicenter to win the middle jewel of the Triple Crown in only his fourth career start.

With three wins and a close second to highly regarded Mo Donegal in four starts, Early Voting looks like a rising star in the 3-year-old division.

Speed Figures: As mentioned above, Early Voting has improved steadily throughout his career. He earned a new career-best Equibase Speed Figure of 103 for the Preakness win and a career-top 105 Beyer Speed Figure for the career-defining win. His rising speed figure patterns for both speed-figure makers paint the picture of a 2- and now 3-year-old honing his craft – Equibase: 79-81-102-103; Beyer: 76-78-96-105.

Running Style: Especially in recent years, early speed has been potent in Triple Crown races. Off-the-pace runners can, and do, win Triple Crown races, but the tactical speed that Early Voting possesses is extremely beneficial and we saw how important that was in the Preakness when he got a significant head start on Epicenter. Tactical speed gives a racehorse’s rider options and often allows horses to avoid traffic trouble, and Early Voting also showed in the Preakness that he can rate just off the pace and be as effective as he is when dictating the tempo.

Connections: Early Voting’s owner, Seth Klarman, discovered racing while growing up three blocks from historic Pimlico Race Course in Baltimore. Klarman’s Klaravich Stables teamed with trainer Chad Brown to win the Preakness five years ago with Cloud Computing (co-owned with William Lawrence) and duplicated the feat in 2022. Klarman, president of The Baupost Group, a successful hedge fund, formed Klaravich Stables in 1993 with his friend from Baltimore, Jeff Ravich. They bought and raced horses together for about a decade until Ravich left the partnership.

As mentioned above, Chad Brown is a former assistant to Hall of Fame trainer Bobby Frankel. He has won more than 2,100 races since venturing out on his own in 2007. He won his first Breeders’ Cup race in 2008 when Maram scored in the Juvenile Fillies Turf and by 2013 had firmly established himself as one of the top trainers in the country. Brown has amassed 15 Breeders’ Cup wins and took home the Eclipse Award as outstanding trainer four straight years from 2016 to 2019. In addition to his two Preakness wins, Brown finished second in the 2018 Kentucky Derby with Good Magic and second in the 2018 Belmont Stakes with Gronkowski.

Jose Ortiz has been aboard Early Voting in each of his four starts. The 2017 Eclipse Award winner as outstanding jockey earned his second victory in a Triple Crown race in guiding Early Voting to a Preakness score. He also rode Tapwrit to victory in the 2017 Belmont Stakes and has three second-place finishes in Triple Crown races. Ortiz has more than 2,500 wins since taking out his jockey’s license in 2012.

Pedigree Notes:  Early Voting is from the first crop of 2017 Horse of the Year Gun Runner, who is off to a terrific start to his second career as a sire with 2021 champion 2-year-old filly Echo Zulu, Arkansas Derby winner Cyberknife, and Runhappy Santa Anita Derby winner Taiba joining Early Voting among Gun Runner’s 12 stakes winners from just 81 starters through May 22. Wow!

A well-bred colt like Early Voting who won a classic race also should get a big opportunity to prove himself in a second career as a stallion in the not-so-distant future.

Long-term Potential: Trainer Chad Brown ruled out the Belmont Stakes Presented by NYRA Bets as an option for Early Voting following his Preakness win. He said that most likely they will look to bring him back in either the $1 million TVG.com Haskell Stakes July 23 at Monmouth Park or the Jim Dandy Stakes July 30 at Saratoga Race Course. The former would seem to complement Early Voting’s running style exceptionally well, while the latter would offer an opportunity to compete on the track that will host Early Voting’s long-range target, the Runhappy Travers Stakes Aug. 27 at Saratoga.

Given that Early Voting might have placed himself in position to compete for the Eclipse Award as champion 3-year-old male, a win in the Grade 1 Haskell would carry more weight with voters than the Jim Dandy and it would seem to be a terrific spot to make use of his tactical speed. He would be formidable in the Haskell.

As for the rest of the year, Early Voting has a great chance to win some big races in the summer and early fall. I worry about his ability to run a top race at 1 ¼ miles, but he surely will get the chance, if healthy, to prove me wrong in the Travers. In the capable hands of Chad Brown, Early Voting has emerged as a force in the 3-year-old male division.