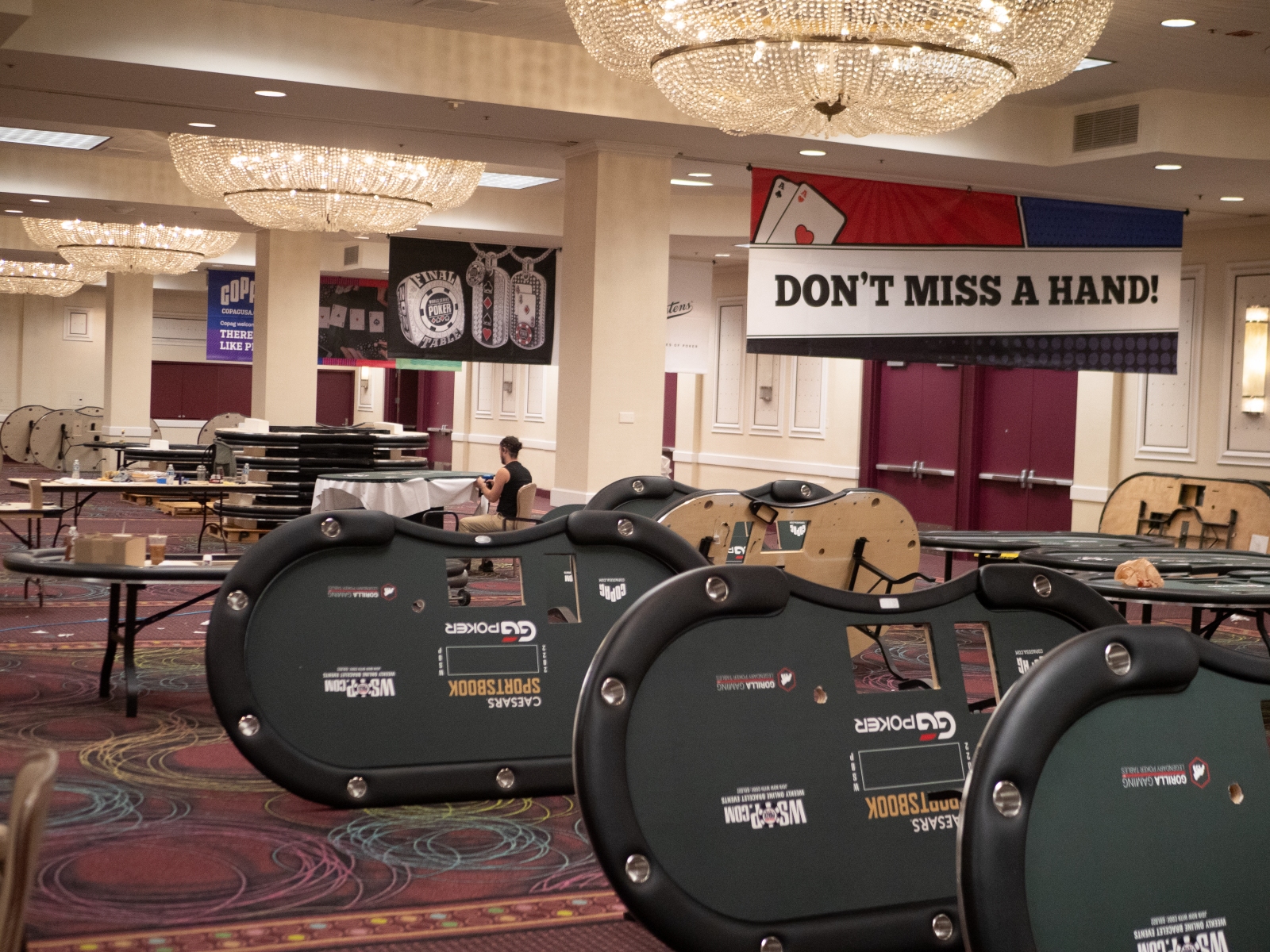 2022 WSOP Hacks: Tips for the Festival

With the World Series of Poker’s move to Ballys and Paris on the Las Vegas Strip, the festival that runs from May 31 to July 20 will prove new to everyone, whether you’ve attended annually or haven’t been in a decade.

Preparations were underway at Paris Las Vegas on Thursday for the 2022 WSOP, which starts on Monday. (Image: Chris Wallace)

While some things remain the same, such as certain events on the schedule and their start times, many aspects of the series will be completely different as players familiarize themselves with the new venues.

CardsChat recently dove into how to save money with the WSOP’s move to the Strip. Today, we’ll look at some tips for navigating the series in its new location.

The usage of both Paris and Ballys for the series will allow for about 600 poker tables to be placed across 150,000 square feet of tournament space. WSOP Executive Director Ty Stewart called it “the best facilities we’ve ever had.” Certainly, if you’ve seen footage or photos of the new digs, the chandeliers in Paris beat the overhead lighting at the Rio, which hosted the WSOP for the previous 17 years.

Fortunately, it’s an easy stroll between the two casinos and their convention spaces through the indoor walkway that connects the properties. Presumably, tournament organizers will place plenty of signage between the two ballrooms directing players so they don’t easily get lost. Fortunately, the Champagne Ballroom in Paris is near the escalators to the parking garage, which will help with navigation.

But which poker formats are where? The WSOP’s FAQ page points to Paris as the home of most of the action. That casino will host all Day 1 starts, cash games (including the high-roller King’s Lounge), single-table and mega satellites, and deep-stack events. Meanwhile, Ballys will host Day 2 restarts, all final tables, and overflow — as needed — for Day 1s of large-field tournaments. The Ballys Event Center will be home to featured tables for CBS telecasts.

The WSOP posted a helpful video this week hosted by tournament announcers Lon McEachern and Norman Chad that offers useful information about the layout and plans:

In addition, the Ballys poker room, located near Nosh Deli and the keno lounge, will remain open during the WSOP.

A note: it will be curious to see how the availability of several poker rooms within walking distance affects cash games at the WSOP this summer. With players less landlocked, there could be increased action at places like Aria and Bellagio and fewer games in the WSOP tournament venue. As always, keep the Bravo app on your phone so you can track cash game availability in the area poker rooms.

One of the more annoying aspects of the WSOP are the often-long registration lines. On days of events that should have massive fields, such as the Housewarming, Colossus, Monster Stack, etc., you can expect lines to snake down hallways. Last year’s Reunion tournament generated 12,973 entries, for example, even with the WSOP held in the fall during a pandemic and international players barred for most of the series.

Even on days that don’t have massive-field events, lines can get long right before and immediately after the scheduled start times for tournaments since players often wait until the last minute to register.

If you want to avoid those lines, register at off times. I can tell you from personal experience, being an early bird myself, that lines are practically nonexistent in the mornings between 6 am and 8 am Another good time for registration is after 9:30 pm since the last daily deep stack tournament kicks off at 9 pm.

Remember that, with the move to the Strip, registration will occur in the Champagne Ballroom at Paris.

A good way to avoid the registration lines is to use the automated FasTrac kiosks, which will be set up in the WSOP venues. But note that the lines for these can also grow long in the hour before large tournaments.

Familiarize yourself with the new venues

You don’t want to hit the first break of your first tournaments and have no clue in which direction to turn to find the nearest bathroom. So, it’s important to learn where facilities are in these new venues before then.

As an example, I plan to arrive in Vegas on the evening of June 4 to play the next day’s Housewarming flight. I’ll take the time that evening to not only scope out the restrooms, but also to note the location of exits for access to fresh air, the best food options, etc. One aspect of the WSOP that won’t change with the move to the Strip is the throngs of players rushing this way and that on tournament breaks.

Knowing where to go will help you beat the rush.

Johnny Kampis — the author of “The Essential Guide to Vegas during the World Series of Poker” and “Vegas or Bust: A Family Man Takes on the Poker Pros” — has been making the summer trek to Las Vegas from Alabama since 2004. When not playing poker, he’s a professional journalist who’s written for American Spectator, Fox News, HuffPost, Watchdog.org, and many others. He currently writes for the Taxpayers Protection Alliance and serves on the FCC’s media advisory panel.