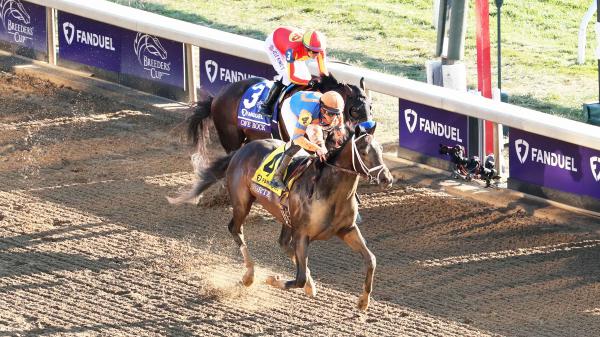 This feature provides a capsule look at three horses who are heating up on the Triple Crown trail and three horses whose chances for the 2023 Kentucky Derby Presented by Woodford Reserve are not quite as strong as they were a few weeks ago.

In the first edition of this blog for the 2023 run for the roses, the focus is setting the bar for the soon-to-be 3-year-old division as the calendar moves into mid-December and creeps toward January. Once the action on the Derby trail begins to percolate in early 2023, look for this column to appear regularly to analyze to biggest movers approaching the first leg of the Triple Crown.

For now, let’s take a look at some top Derby hopefuls that have established themselves early on the Triple Crown trail.

There really is no place we should start other than Forte. I must admit I was absolutely floored that maiden winner Arabian Knight at 10-1, and not Forte (15-1), is favored by Caesars Sportsbook in its latest odds to win the 2023 Kentucky Derby. Someone must have plunked down significant cash on Arabian Knight because as far as I’m concerned Forte has separated himself from the field early. He has four wins in five starts including a convincing 1 ½-length win in the FanDuel Breeders’ Cup Juvenile Presented by Thoroughbred Aftercare Alliance. That followed a Grade 1 win Oct. 8 in the Claiborne Breeders’ Futurity that was flattered when fourth-place finisher Instant Coffee returned to win the Grade 2 Kentucky Jockey Club Stakes by 1 ¼ lengths Nov. 26. His speed figures while stretching out in distance have been encouraging as he won the seven-furlong, Grade 1 Hopeful Stakes before the Breeders’ Futurity and Breeders’ Cup Juvenile and posted Equibase Speed Figures of 97-105-107 and Beyer Speed Figures of 92-92-100. With Hall of Fame trainer Todd Pletcher in his corner as well as three-time Eclipse Award-winning jockey Irad Ortiz Jr., and enough stamina on the bottom half of his pedigree to offer some optimism about his chances to excel at 1 ¼ miles, Forte looks like a legitimate Kentucky Derby threat.

My initial plan was to have Cave Rock in the cooling down section after he lost as the 1-2 favorite in the Breeders’ Cup Juvenile, but the more I thought about it the more I became convinced that his place near the top (second to Forte, in fact) of this division is secure. First and most importantly, he profiles as the fastest horse from this 2-year-old male division on paper … and he’s been consistent. In his four starts – three wins and a Breeders’ Cup runner-up finish – he’s posted Beyer Speed Figures of 101-98-104-99 and an Equibase line of 109-94-102-104. Especially from a Beyer standpoint, he is simply far faster than any of his peers not named Forte and even if he does not improve at all from 2 to 3 he will be very tough to beat at 1 1/16 miles in California. His cruising speed – much like his sire, Arrogate – is elite and while there might be some distance concerns in his pedigree, I think there is a very solid chance he is talented and fast enough to extend his ability to 1 1/8 miles and beyond. Cave Rock has not earned any qualifying points for to date because his Hall of Fame trainer Bob Baffert is not eligible to run horses in next year’s Kentucky Derby, but make no mistake if Cave Rock is healthy and in good form next spring his owners will find a way to get him into the starting gate on the first Saturday in May. Last spring, a contingent of Baffert 3-year-olds was transferred to trainer Tim Yakteen.

Between Kentucky Jockey Club Stakes winner Instant Coffee and Remsen Stakes inner Dubyuhnell, I prefer the former for the final spot here. However, both appear to be at least a notch and probably two below the top pair. Essentially, I just don’t view Instant Coffee as fast enough, right now, to pose a serious threat to Forte or Cave Rock. However, Thoroughbreds often make significant jumps in ability late in their 2-year-old or early in their 3-year-old seasons, and Instant Coffee has shown some encouraging signs. The Bolt d’Oro colt closed from off the pace despite leisurely early fractions in the Kentucky Jockey Club to prevail by 1 ¼ lengths and he finished very well with a final sixteenth of a mile in 6.23 seconds according to Trakus data. Additionally, I think there is significant reason from a pedigree perspective (which I explained a bit more in depth here) to believe that Instant Coffee can be effective as the races get longer on the Derby trail. Instant Coffee’s two-time Eclipse Award-winning trainer, Brad Cox, won the Belmont Stakes Presented by NYRA Bets in 2021 with Essential Quality and the Kentucky Derby that year via disqualification with Mandaloun.

Honorable Mention: The bottom half of Dubyuhnell’s pedigree was a red flag for me when evaluating his chances as a serious Derby contender, but otherwise there are several positives for the chestnut Good Magic colt. He has a win at 1 1/8 miles and showed he relishes both a fight and a sloppy track in winning the Grade 2 Remsen Stakes by a half-length Dec. 3 at Aqueduct. He’s also shown versatility in closing from off the pace to win and pressing the pace in the Remsen. Dubyuhnell will need to improve, as is the case with virtually all Thoroughbreds at this point in their careers, but the future looks bright. … Hoosier Philly generated significant buzz when winning the 1 1/16-mile Golden Rod Stakes in 1:43.94, significantly faster than her male counterpart Instant Coffee one race later at Churchill Downs in the Kentucky Jockey Club (1:45.25). Her trainer, Tom Amoss, said after the race that the Kentucky Derby had crossed his mind when thinking about his talented Into Mischief filly, who has now won all three of her starts by open lengths as the heavy favorite. She is one to keep an eye on … for sure.

As a general rule, I try not to be harsh in my critique of late 2-year-olds and early-season 3-year-olds as they are still learning their job and maturing and often their connections are trying to identify the right surface and distance. Many times, the runners that land in this cooling down section at this time of year are simply Thoroughbreds that don’t look, to me, like 1 ¼-mile horses and Gulfport fits that bill. He won his first two starts, including the Bashford Manor Stakes, by a combined margin of 19 ¼ lengths but has been less effective as the distances of his races got longer. He was second as the even-money favorite in both the Saratoga Special Stakes and Grade 1 Hopeful Stakes before fading to third, beaten by 4 ¾ lengths as the heavy favorite in the one-mile Champagne Stakes Oct. 1. My hunch is this one might prefer to stay in sprints.

I’m not as concerned about distance long term for Verifying, a Justify colt out of Grade 3 winner Diva Delight, by Repent. Diva Delight was a graded stakes winner at 1 1/16 miles who produced 2019 champion older female Midnight Bisou, an elite distance runner. But after winning his debut impressively as the odds-on favorite, Verifying faded late in the Grade 1 Champagne Stakes in October before finishing a troubled (and well-beaten) third in the FanDuel Breeders’ Cup Juvenile Presented by Thoroughbred Aftercare Alliance. I still think there is talent there and I have this $775,000 purchase at the 2021 Keeneland September yearling sale in my Equibase Virtual Stable to monitor, but there is no doubt a little of the shine came off this promising 2-year-old Nov. 4 at Keeneland at the Breeders’ Cup World Championships.

This Street Sense colt won his debut by 5 ½ lengths Sept. 24 at Parx Racing and the Rocky Run Stakes by 3 ¼ lengths Oct. 15 at Delaware Park (my old stomping ground) for trainer John Servis, of Smarty Jones fame, and co-owner Cash is King LLC, of Afleet Alex fame. Needless to say, I pushed every chip in on Tuskegee Airmen and was disappointed when he was a well-beaten third, 11 ¾ length behind winner Dubyuhnell, in the Grade 2 Remsen Stakes Dec. 3 at Aqueduct. There is still much to like in Tuskegee Airmen (from the family of top sire War Front) and I’m certainly not jumping ship off of one loss on a sloppy track in December of his 2-year-old season, but I also wasn’t super-impressed with the Remsen winner and I wonder how this one might fare as the competition gets better after his most recent effort. My hope is that he just didn’t care for the track and returns to form in his next start.