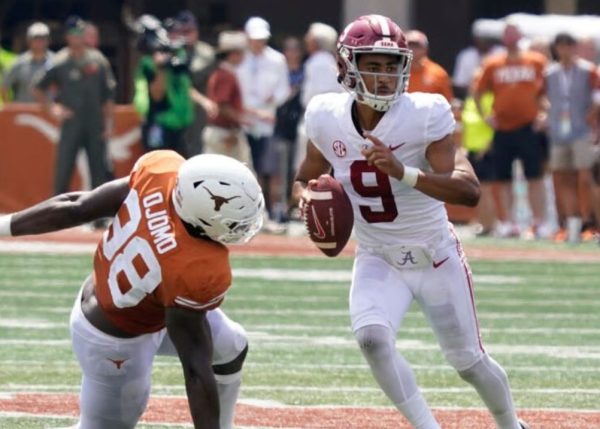 With the 2022 NFL regular season over for 18 NFL teams, the preparations for the upcoming draft are underway. The NFL futures market is open and after an off year for quarterbacks, it appears that the most important position in sports is back in 2023. A number of quality quarterbacks could go in the first round and it’s likely that one is taken with the first overall pick.

Young did not defend his Heisman Trophy win nor was he able to get his Alabama team back in the College Football Playoff. He did, however, finish with 3,328 passing yards, 32 touchdowns, and just five interceptions. After just his second season as the Crimson Tide starter, it is believed that Young is a can’t-miss prospect. That’s why he’s the overall favorite to go No. 1.

It was Stroud who Young beat out to win the Heisman in 2021. Stroud was again a finalist in 2022 but lost out to USC QB Caleb Williams, who will be in this position a year from now. Stroud threw for 3,688 yards and 41 touchdowns last season in leading the nation’s No. 2 scoring offense (44.2 ppg). Stroud isn’t as mobile as Young, but he is bigger and more durable. If anyone could overtake Young at No. 1, it’s Stroud.

Last year, the No. 1 pick was Georgia DE Travon Walker. Should the Bears or a team that trades into No. 1 decide to go defense, the first pick could be Alabama LB Will Anderson (+600 at online sportsbooks). Crimson Tide head coach Nick Saban has produced a plethora of first-round defensive talent. Anderson might be the best. As an edge rusher, Anderson had 10 sacks and 17 tackles for loss last season. He had 17.5 sacks as a sophomore and seven as a freshman. He’s big, fast, and can get after the quarterback. It’s unlikely that Anderson goes No. 1 because of the quarterback talent available in this draft. However, there is no doubt he is the best defensive player available.

Three of the last five first overall picks were Heisman Trophy winners in their final college season. Walker, who went first to Jacksonville last year, and QB Trevor Lawrence, who went No. 1 to the Jags the previous year, are the only two that didn’t win the Heisman.

In 13 of the last 15 NFL drafts, an offensive lineman has been selected in the top 10. Last year, Ikem Ekwonu, Evan Neal, and Charles Cross were selected No. 6, 7, and 8. Northwestern OT Peter Skoronski is given +7500 odds to go No. 1 this year. He and Paris Johnson are likely top 10 picks.