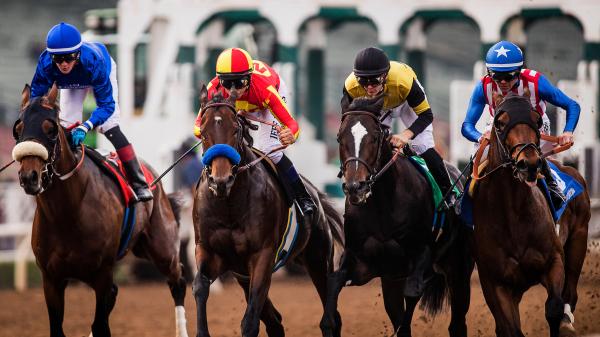 As a winter stakes for 3-year-olds, the Sham Stakes at Santa Anita Park has a familiar name next to eight of its past winners. While trainer Bob Baffert’s horses may not be eligible to run in the Kentucky Derby Presented by Woodford Reserve or accrue qualifying points for the race, his stable will be well-represented with four of the six starters Sunday when he will seek his ninth victory in the one-mile, Grade 3 stakes.

1. Newgate: His career started on a promising note with a debut win in July at Del Mar. But since then, he’s winless in three starts. He was second last time out in a seven-furlong minor stakes but was unplaced around two turns in a pair of Grade 1 stakes last year. Others from Baffert’s barn look better, even with Frankie Dettori in the saddle.

2. National Treasure: He was a solid third in the FanDuel Breeders’ Cup Juvenile Presented by TAA and seemed to get better with seasoning for Baffert. If he handles the transition from 2 to 3 smoothly, he will be hard to beat.

3. Speed Boat Beach: In living up to his name, he’ll probably set the early pace. He’s coming off a Grade 3 stakes win at a mile on turf which opened some eyes about his stamina. He could be hard to catch in this small field.

4. Reincarnate: The four Baffert horses drew posts 1-4 and this one should be in the mix from the start after breaking his maiden in gate-to-wire fashion last time out. It took four swings to finally connect with a victory, but he seems to progressing nicely and cannot be ignored in this spot.

5. Packs a Wahlop: It’s not unusual for a turf runner to be tested on dirt at 3 just to see if he could be a Triple Crown prospect, which is the case here. He’s a three-time winner on turf but was fourth on a sloppy track in his lone dirt race which does not inspire confidence against Baffert’s foursome.

6. Spun Intended: If a horse spoils Baffert’s party it’s likely this one. He was a troubled second in his debut and then rebounded with an impressive 6 ½-length maiden win. He’s bred to handle two turns and if he takes a step forward off his last try, he can make his presence felt in the final yards.