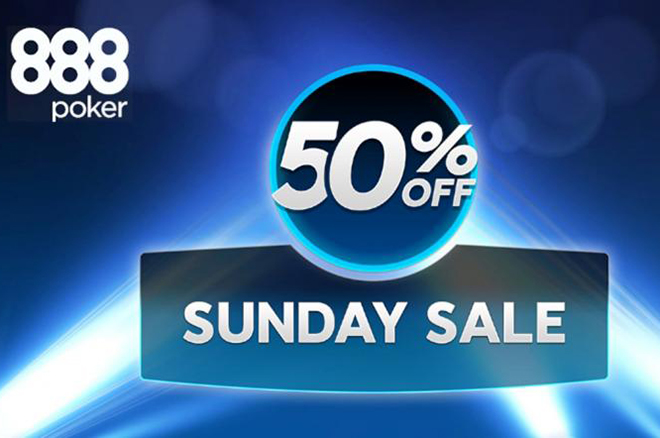 Two of the biggest Sunday tournaments at 888poker are more accessible than ever before on June 19, thanks to the online poker site having a Sunday Sale. The $100,000 guaranteed Main Event and the $40,000 Sunday High Roller are having their buy-ins slashed for one night only. Can you afford to miss out?

Up to five re-entries are permitted for the first 205 minutes, which is when late registration slams shut. Day 1 of this two-day affair ends when the nine-handed final table is set. Those final nine then return to the action at 7:00 p.m. on June 20 to conclude the tournament, doing so under the watchful eyes of the hugely entertaining Nick Wealthall and David Tuchman on the 888poker Twitch channel.

Last week’s edition of this tournament, which cost $109 to enter, drew in a crowd of 738 unique players who purchased 196 re-entries between them. Each of the nine finalists bagged no less than $1,480 for their efforts, with the tournament ended in a heads-up chop. Brazil’s “noWHATfella” finished in second place for $12,401, while Uruguay’s “Onlyflips” walked away with the title of champion and $14,368 in prize money.

Rub Shoulders With High Rollers For $265

Entering this tournament sees you and the other entrants sit down with 10,000 chips and play to a 12-minute clock where the blinds start at 30/60/7a. Three re-entries are allowed during the first 180-minutes, and the tournament concludes in a single day.

Germany’s “kellerassel0” is the reigning champion, having outlasted a total field of 74 entrants. They banked $12,000 for their efforts, although they paid $525 for the privilege; you’ll only pay $265 this weekend!

It is not only the Sunday Sale Main Event and Sunday Sale High Roller that have had their buy-ins slashed because it is a similar story with the satellites that feed into them. There has never been a better time to take a shot in 888poker’s biggest Sunday tournaments!

Begin Your Sunday Sale Quest with an 888poker Welcome Bonus

Your first deposit is matched 100% up to $400 in the form of a releasable bonus. You have 90 days to release as much bonus as you can. Contact 888poker support for more details.