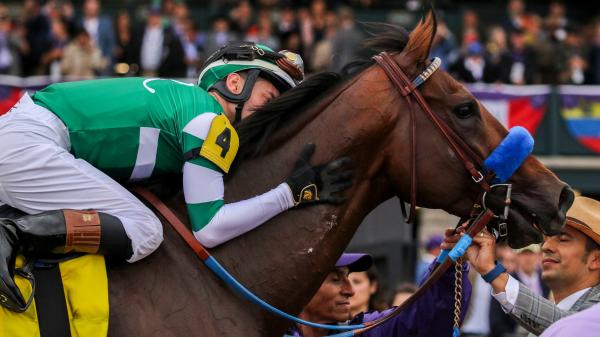 A 2.5% Interest in Retired Superstar Flightline Sells for $4.6 million at Auction

Just two days after Flightline’s record-setting victory in the Longines Breeders’ Cup Classic at Keeneland Race Course, Freddy Seitz signed the ticket for a 2.5% interest in the stallion prospect for $4.6 million in the sales pavilion just a stone’s throw from the finish line where he made history.

The champagne would flow Nov. 7 as about 700 people packed nearly all of the seats in the Keeneland sales pavilion and crowded the standing room areas. As only 42 people were pre-registered to bid on the share of the horse — either through an agent, in-person, or online — most of those in the room were there to witness history.

Just as he did on the track, Flightline would again deliver.

That winning bid of $4.6 million puts a mind-boggling $184 million valuation on the son of multiple leading sire Tapit.

In the minutes after the sale, Seitz said the owner did not wish to be named, although that could change in the future. Seitz said as he talked with the buyer from “out West” during the auction, it sounded like he was having a good time, even as bids soared past his initial estimate.

“He was really excited about this horse and just wanted to make a big splash,” Seitz said. “He’s dealt with some nice horses in the past but obviously nothing like this horse. I’m not sure any of us have ever dealt with a horse like this.”

The interest in Flightline, sold as Hip 1F at the start of the Keeneland November breeding stock sale, was consigned by Lane’s End, agent. The racing arm of Lane’s End, Woodford Racing, owns a share in Flightline and he will stand at the farm for a fee to be determined.

“There was a tremendous amount of interest,” said Bill Farish of Lane’s End. “It was just so difficult to know where something like that would go. It’s the first time that anything like this has ever been done on a horse of this magnitude, when there was really only one available. It was an incredible opportunity, and again, it’s only because it was Flightline that this happened.”

The plan to sell the small interest in the horse was announced Oct. 25, ahead of his 8 1/4-length win in the Breeders’ Cup Classic — the largest margin of victory in the history of that race. Owned by Hronis Racing, Summer Wind Equine, West Point Thoroughbreds, Woodford Racing (the racing arm of Lane’s End), and Siena Farm, the percentage auctioned Monday was offered from West Point’s 17.5% share.

Flightline officially was retired from racing Nov. 6, wrapping up an undefeated career in which he won six races and earned more than $4.5 million. Besides the Classic, Flightline also earned Grade 1 scores in the TVG Pacific Classic Stakes, Hill ‘n’ Dale Metropolitan Handicap, and Runhappy Malibu Stakes.

Terry Finley, CEO and president of West Point Thoroughbreds, said it was amazing to see the plan come together as the horse did his part on the track and interest soared on what he said would be the only share in the new stallion on the market. Finley said that scarcity, and the marketing of the horse, helped make the sale a massive success.

“I always thought I was a pretty good marketer, but in this case I’ll give it to Bill Farish, (Keeneland CEO and president) Shannon Arvin, and the Keeneland organization and Lane’s End — all the credit to them,” Finley said, “They had a vision — and a lot of people have vision — but far fewer actually execute that vision and the way they did.”

It would not take long Monday to see that the horse had connected with potential buyers. After an initial bid of $500,000, a flurry of bids surpassed $1 million barely after the recognition of that first bid. From there, bids would increase by $100,000 on each offering. The bids would be steady as they soared past $2 million, accelerated as they approached $3 million and passed that number. Then the bids would steadily flow before finally reaching their conclusion.

Applause then filled the pavilion and all eyes focused on Seitz. Those involved with the purchase and the sale would file outside for interviews with the media. Arvin said the sale shows potential for creative ideas.

“I think it could start a new trend so long as you have the right product,” Arvin said. “Just like we found with the digital auctions, you just have to have the right asset that you’re selling. And Flightline definitely is that. It’s pretty, pretty amazing.”

With the sale, the new buyer has 2.5% of Flightline, West Point Thoroughbreds 15%, Kosta, Stephanie, and Pete Hronis’ Hronis Racing with a 37.5% share, and breeder Jane Lyon of Summer Wind Equine with 25%. Anthony Manganaro of Siena Farm has a 10% share, as does Woodford Racing.

The initial partnership was formed after West Point purchased Flightline, out of the Indian Charlie mare Feathered, for $1 million from the Lane’s End consignment at the 2019 Saratoga Sale, Fasig-Tipton’s New York sale of select yearlings.

Around the corner will be the stud fee for Flightline, a decision that will be impacted to some level by Monday’s valuation. He noted that other than this offered share, the syndicate already was in place.

As things settled down after the sale, Finley greeted Arvin with a hug.

“It was just surreal. I mean, the electricity in the room,” Finley said. “We couldn’t have sat down and drawn it up any better. … There are few times this happens in the business and all the credit of course goes to the horse and the team around him that deal with him every day.”

The horse that first captured Finley’s imagination at Fasig-Tipton Saratoga, then sent his spirit soaring with record-breaking races, continued to provide thrills on a sunny afternoon in Lexington.—Frank Angst and Lauren Gash