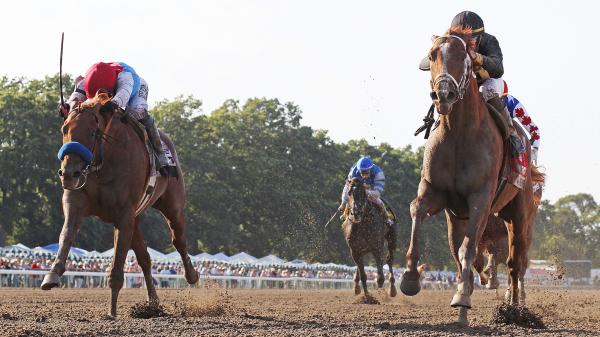 Cyberknife punched his ticket to the $6 million Longines Breeders’ Cup Classic with a win in the $1,017,500 TVG.com Haskell Stakes July 23 at Monmouth Park. The Classic is the marquee race of the two-day Breeders’ Cup World Championships to be held at Keeneland for the third time overall on Nov. 4-5, 2022.

Cyberknife burst onto the racing scene with a breakthrough win in the Grade 1 Arkansas Derby April 2, 2022, at Oaklawn Park that shed light onto a compelling story about how he was named. Owner Al Gold was diagnosed with prostate cancer right at the time he was turning 65 years old and a treatment called a “cyberknife,” which delivers precise doses of radiation directly to cancer cells without damaging other areas, helped save his life.

Gold, who races Thoroughbreds under the ownership name Gold Square, bestowed the name Cyberknife upon a promising colt from the first crop of 2017 Horse of the Year Gun Runner out of multiple stakes winner Awesome Flower, by Flower Alley, that he bought for $400,000 at a yearling.

That colt developed into a top 3-year-old under trainer Brad Cox’s supervision and won the Arkansas Derby in his sixth start. After a disappointing 18th-place finish in the Kentucky Derby Presented by Woodford Reserve May 7 at Churchill Downs, Cyberknife bounced back with a victory by a nose in the Grade 3 Matt Winn Stakes June 12 at Churchill Downs followed by a head victory in the TVG.com Haskell Stakes in which he defeated highly regarded Runhappy Santa Anita Derby winner Taiba and previously unbeaten Jack Christopher.

Cyberknife would be stepping up to face older horses in the Breeders’ Cup Classic, but he appears to be trending in the right direction:

Trainer Brad Cox said he will point Cyberknife to the $1,250,000 Runhappy Travers Stakes Aug. 27 at Saratoga Race Course and the long-range goal is the Breeders’ Cup Classic. Both of those races are run at 1 ¼ miles, an eighth of a mile longer than the Haskell.

“We’ve got to get there. I don’t want to get too far ahead. We’ll let him enjoy the Saratoga weather, like everyone else and hopefully, we’ll march forward,” Cox said. “We do feel like he’s a horse that can continue on and I do feel he’s a horse that’s capable of getting a mile and a quarter.”