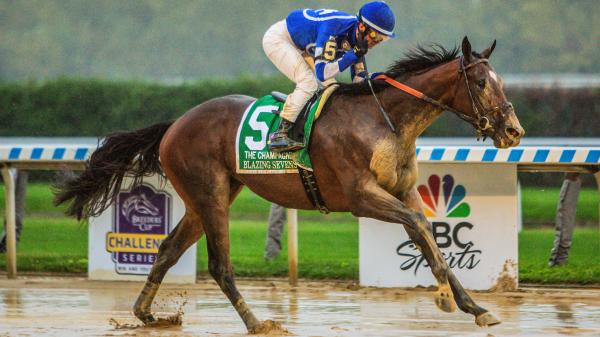 Like his sire, Good Magic, Blazing Sevens is on target for the Breeders’ Cup Juvenile for trainer Chad Brown off an impressive effort in the Grade 1 Champagne Stakes. Unlike his sire, who ran second in the Champagne in 2017 before winning the Juvenile, Blazing Sevens heads to the World Championships off a win by 3 ¼ lengths as the co-longest shot in the field at 8.50-1.

Blazing Sevens made a terrific first impression when winning his debut July 24, 2022, at Saratoga Race Course by 6 ¼ lengths to earn an 85 Equibase Speed Figure and a 78 Beyer Speed Figure. He then finished a distant third, beaten by 12 lengths, in the Grade 1 Hopeful Stakes on a sloppy track at Saratoga Sept. 5. That uninspired effort on a sloppy track at Saratoga no doubt led betters to look elsewhere in the Champagne on Aqueduct’s main track, but Blazing Sevens provided a compelling reminder that every dirt main track plays differently when rain turns it muddy or sloppy.

The dark bay or brown colt appeared much more comfortable on the sealed-sloppy main track at Aqueduct despite trailing the six-horse Champagne field early. He moved up between horses in the final half-mile of the one-turn-mile race, angled to the outside under jockey Flavien Prat, and finished with a powerful rush to surge well clear.

While the other runners were slowing down significantly after a moderate pace, Blazing Sevens had plenty left in the stretch with a final eighth of a mile in 12.41 seconds, which was about half a second faster than runner-up Verifying. Blazing Sevens earned a career-best 95 Equibase Speed Figure and 91 Beyer Speed Figure in the victory and cemented his credentials as a top contender for the Breeders’ Cup Juvenile while earning an expenses-paid starting spot via the “Win and You’re In” Challenge Series. He looks like a serious win candidate for several reasons:

“He’s been a wonderful horse to get along with. He’s all class,” Brown said of Blazing Sevens. “I want to thank Pete Bradley for picking him out and John and Carla Capek, the owners. This is their second year in owning horses and they’re lovely people, very deserving. If he comes out healthy, it’s on to the Breeders’ Cup.”