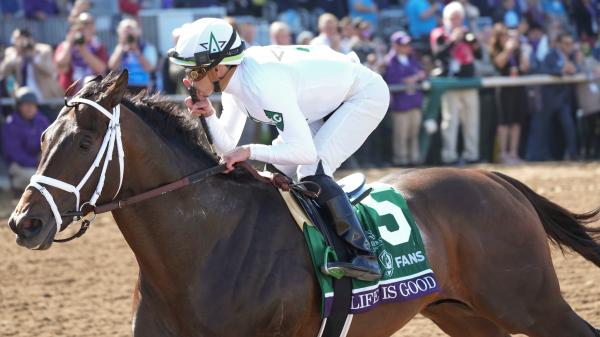 The beat goes on for trainer Todd Pletcher, who was enshrined in the National Museum of Racing’s Hall of Fame last August in his first year of eligibility. The depth and versatility of his powerhouse operation will be showcased on Pegasus World Cup Day on Saturday at Gulfstream Park.

Pletcher, winner of a record seven Eclipse Awards as outstanding trainer in North America, expects to be represented in each of the afternoon’s three premier races. Big Ass Fans Breeders’ Cup Dirt Mile winner Life Is Good looms as the primary threat to defending champion Knicks Go in the $3 million Pegasus World Cup Invitational. He also is expected to saddle defending champ Colonel Liam as well as Never Surprised in the $1 million Pegasus World Cup Turf and multiple graded stakes winner Sweet Melania in the inaugural running of the $500,000 Pegasus Filly & Mare Turf.

In all, the Pegasus card features seven graded stakes races worth $5.2 million. NBC will provide extensive coverage from 4:30-6 p.m. ET.

PEDULLA: How good is Life Is Good right now?

PLETCHER: He’s training exceptionally well. He’s a very, very talented horse. He would be one that would impress you every time you see him and certainly every time you watch him work or race.

PEDULLA: What makes him such an extraordinary work horse? Every work seems to be good.

PLETCHER: He enjoys it. He’s got terrific action. His mechanics are so efficient. He just has that ability to go fast and maintain it. He’s just a special talent.

PEDULLA: In the ideal scenario, do you hope to sit just off Knicks Go?

PLETCHER: It’s basically going to be a jockeys’ race in terms of how fast they’re going. You have to keep in mind this horse was several lengths in front of Jackie’s Warrior going seven furlongs [in the H. Allen Jerkens Memorial at Saratoga]. To me, he’s the naturally fastest horse in the race. That’s his weapon and we’re not going to take it away from him. But it will be up to the jockeys to decide how fast they’re going.

PEDULLA: Is there a danger that the top two contenders could ruin each other’s hopes?

PLETCHER: Yeah, that’s a possibility. These are two very fast horses whose natural running styles are to be on the lead or very close to it. We’re certainly not going to take away our horse’s weapon.

PEDULLA: Can you give me any sense as to the plan for Life Is Good for the rest of the year?

PLETCHER: The conversations I’ve had with Elliott Walden [president of WinStar Farm] and the connections, we’re hoping that the Pegasus goes well and, if it does and he comes out of it well, we’re strongly considering the Dubai World Cup. That’s what we have in mind, but right now we’re locked in on the Pegasus. All decisions for what’s next will be made after the Pegasus and we will see how he comes out of it.

PEDULLA: How big a concern is it that Colonel Liam has not raced since last June?

PLETCHER: Well, it’s not ideal. But he runs well fresh. We’ve had a very consistent training schedule with him. He’s trained the way we had hoped. I think we are going to have him tight enough to perform to his best, but you never know until you actually do it.

PEDULLA: How is Never Surprised doing?

PEDULLA: How about Sweet Melania?

PEDULLA: Is it a point of pride for your operation that you will likely be represented in all three races?

PLETCHER: We’re fortunate. We’ve got a well-balanced stable. Colonel Liam, Never Surprised, and Sweet Melania have shown they like the turf course here, so that’s encouraging. Life Is Good has pretty much shown he can run over any type of surface. I think Gulfstream would be a track that would play to his strengths as well. We’re hoping that everything stays on course.

PEDULLA: How significant has the Pegasus become on the racing calendar?