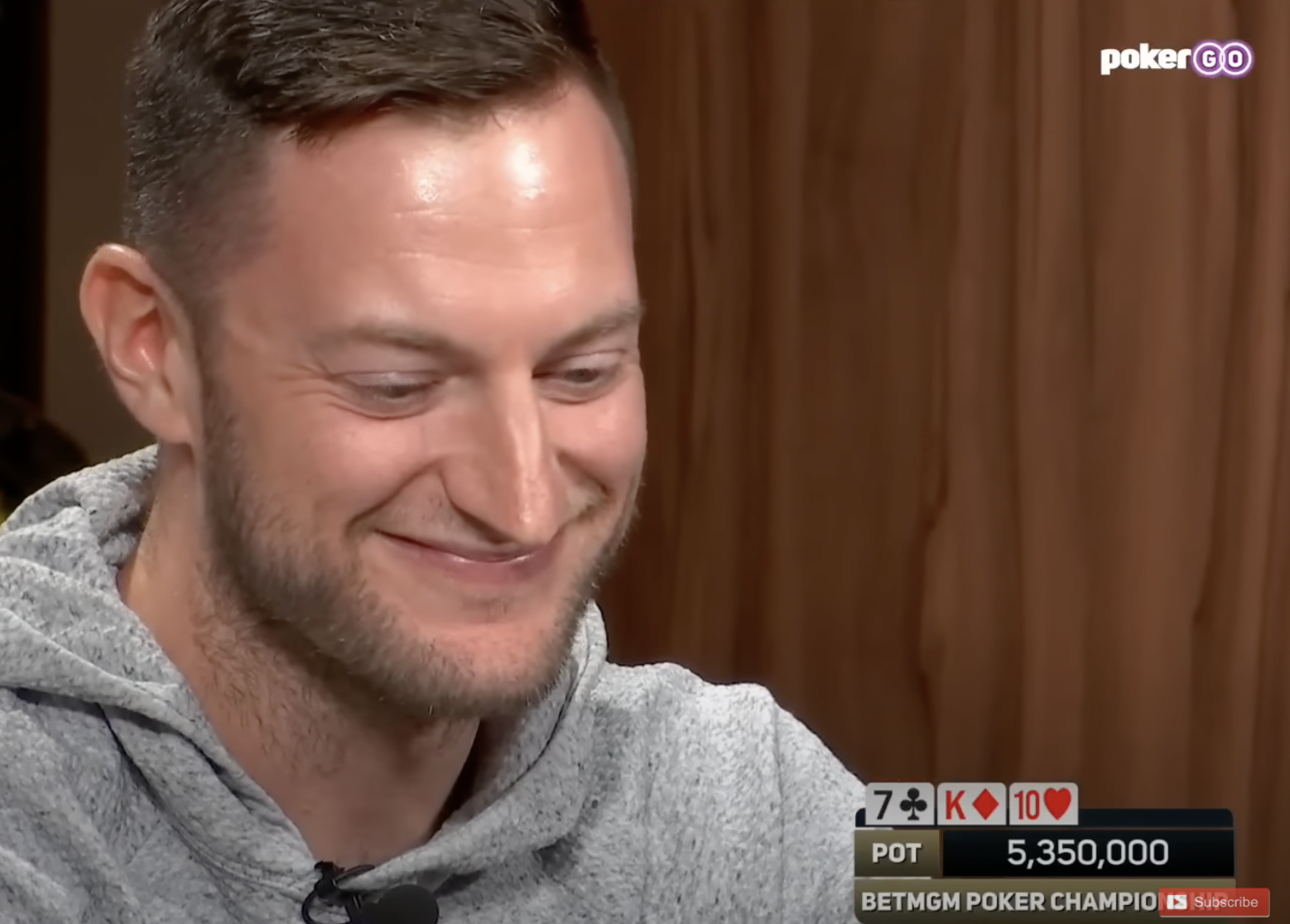 A Royal Runout and a Casino Strike Looming in Atlantic City

A hospitality worker’s strike in Atlantic City, Stapes soars above the Strip, and a charity poker tournament to help support a Las Vegas foodbank are some of the short stacks CardsChat picked up in our latest orbit of poker news.

This is what a poker player looks like when he knows he’s going to runner-runner a Royal Flush. Joey Weissman went on to win the event. (Image: PokerGO)

Somehow the word “cooler” fails to describe a hand that happened between Joey Weissman and Michael Wang at the $3,500 BetMGM Poker Championship Main Event final table on Monday.

With four players left and at about a 4 to 1 chip deficit to chip-leader Weissman, Wang looked down and found pocket queens. He bet 300K of his 2.5 million stack. Weissman tanked for about a dozen seconds before moving his 10.2 million all-in with A♦ J♦.

Wang called, the cards were exposed, and the remaining four players watched the runout of Weissman’s life.

The flop was 7♣ K♦ 10♥. The 10♦ on the turn made the remaining four players perk up and wiggle. Wang was still a 73% favorite to win the pot and survive, even though he was fading the flush, the straight, and an ace. But, Wang couldn’t dodge the bullet, baby, and though the Q♦ gave him a full house on the river, it gave Weissman a royal flush.

Wang took it in stride, walking away with a bad-beat story for the ages and $66K to help ease his pain.

“Welcome to GGPoker,” kidded German poker pro Paul Hoefer, as he spun around over and over in his chair in a bright yellow hoodie. He finished second for $159K.

“What a life you lead,” Noel Rodriquez joked to Weissman after the hand. Soon after, Rodriguez was eliminated in third for $104K.

Weissman, for his part, stared at the board after the river fell, encouraging his tablemates to bask in the wonder of the 1 in 30,940 chance. “Let’s just look at it,” Weissman said as everyone but Wang leaned in. Weissman didn’t squander his good fortune, going on to win the tournament and taking home $224K for his victory.

Stapes towers above the Strip

Poker broadcaster and comedian Joe Stapleton is appearing at Brad Garrett’s comedy club at the MGM Grand from now until July 1. Shows begin at 8 p.m., with tickets starting at $59.95.

Stapes, who’s seen — and said — plenty of outrageous things during his time in the booth and on stage, was at something of a loss for words when he saw his name towering above the Las Vegas Strip earlier this week. 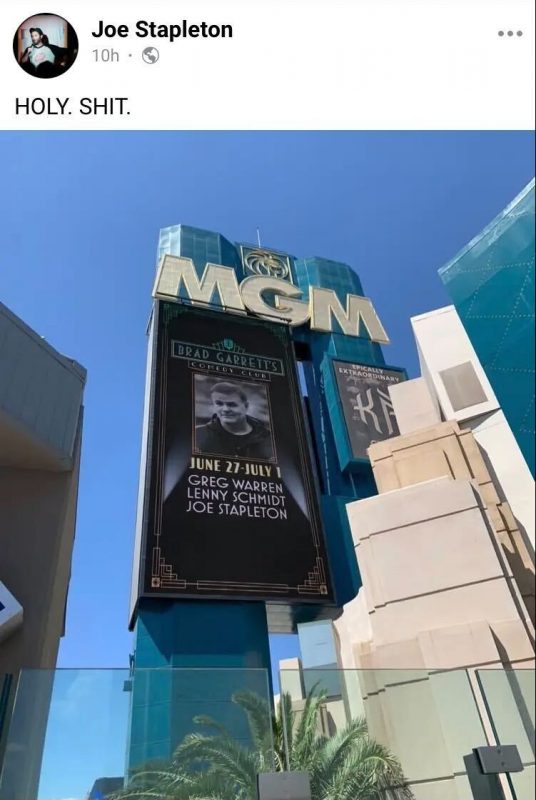 Stapleton is one-half of PokerStars’ commentary team and the co-host of the “Poker in the Ears” podcast for which he and James Hartigan won a Global Poker Index Award this year.

The Charity Series of Poker, a non-profit organization that holds poker tournaments for, yes, charities, is hosting its next event on July 3, at the Moon Nightclub at the Palms Casino.

The tournament’s beneficiary for the “Full House for Food” event is Three Square Food Bank in Las Vegas.

The Charity Series of Poker counts many players as partners, including Danielle Andersen, Neil Blumenfield, Melanie Weisner, and CardsChat’s own Chris Wallace.

A union that represents more than 6,000 hospitality employees in Atlantic City is preparing to strike against four casinos starting Friday. The casinos include three properties owned by Caesars Entertainment — Caesars Atlantic City, Harrah’s Resort Atlantic City, and Tropicana Atlantic City — as well as the Borgata.

The workers include bartenders, cocktail waitresses, house cleaners, and valets who are members of Local 54 of the Unite Here union.

The union, which is mainly bargaining with Caesars Entertainment and the Borgata, also authorized a strike against Hard Rock that is set to begin Sunday. The other Atlantic City casinos that contract with Unite Here have said they will follow whatever agreement is negotiated.

The union’s last strike was in 2016 at Taj Mahal, which was owned by former president Donald Trump at the time. That strike forced the casino to close before the property was eventually sold, reopening the Hard Rock in 2018.

The union members have been working without a contract since their previous agreement expired on May 31.

According to the union, Borgata could lose upwards of $1.6 million a day, while the Ceasars properties face a collective $1 million per day loss. Negotiations are ongoing.