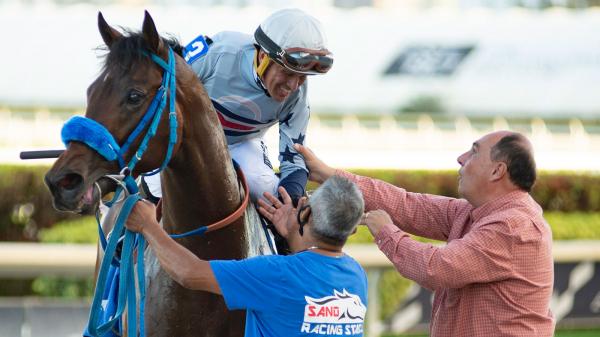 After Harrowing Kidnapping in Native Venezuela, Trainer Sano Rebuilt From Scratch in U.S.

There was a time when Antonio Sano was the winningest trainer in the history of Venezuela. He thought his success would never end.

Then he was twice seized by kidnappers in 2009, leading him and his family to seek sanctuary in South Florida. Suddenly, he was forced to start over.

Sano was penniless. Everything had gone to pay a substantial ransom the family does not wish to disclose. He was a stranger in a strange land. Worst of all, he was a trainer with an empty barn at what was then Calder Race Course.

The wrenching reversal of fortune shook him as much as the feel of a kidnapper’s gun pressed to the side of his head.

“You are coming to the big leagues. You are coming from Venezuela to America,” said Sano as his son, Alessandro, served as interpreter. “It’s completely different kind of horses.”

Slowly but surely, Sano rose to meet the massive challenge. Remarkably, he will saddle his second Kentucky Derby Presented by Woodford Reserve starter in six years when ultra-consistent Simplification, winner of the Grade 2 Fasig-Tipton Fountain of Youth Stakes at Gulfstream Park for owner Tami Bobo, goes to the starting gate on Saturday at Churchill Downs.

Simplification, a bay son of Not This Time, will break from post-position 13 in a full field of 20 with Jose Ortiz aboard. The Florida-bred finished third behind Kentucky Derby rivals White Abarrio and Charge It in the April 2 Curlin Florida Derby Presented by Hill ‘n’ Dale Farms at Xalapa, his most recent effort. Other than a fifth-place finish in his first start last October, he has never been worse than third in six consecutive starts.

Simplification appears to be much better suited to Derby success than Gunnevera, Sano’s first Derby starter in 2017. He possesses a much higher early cruising speed and should be more forwardly placed. The late-running Gunnevera, a $16,000 find as a yearling, was much more dependent on racing luck to accommodate his late kick. He ran seventh in Sano’s Derby debut.

Sano’s horses have earned more than $27 million in purses since he arrived in the United States. He and his family successfully followed a path to citizenship. His overwhelming emotion is gratitude.

“I wouldn’t be in any other country than the United States of America,” he said. “This country opened its door when we had nothing in our pockets. We were able to get a house, get a car, put meals on our table, and also the opportunity to prove ourselves in a very competitive business.”

Sano, 59, will always be indebted to Oscar Martinez and Domingo Spadaro, two of his most loyal clients in Venezuela, for providing the financial support he needed as he began to rebuild his once-powerful stable by claiming horses. He has an uncanny ability to recognize potential in a horse and to maximize that potential.

“He has a God-given gift, my dad,” Alessandro said. “Very few people are able to do it the way my dad does it. I’m so proud of him.”

Sadly, Sano’s success as Venezuela’s preeminent trainer turned him into a target. The first time he was taken, he was the victim of what Alessandro said is known as an “express kidnapping.” His captors rode with him as he withdrew money from various institutions to satisfy their demands.

The second occurrence was even more harrowing. “He just went to work in the morning and didn’t come home in the afternoon. Or the following day. Or the day after that,” Alessandro said.

The silence was terrifying to Sano’s wife, Maria, sons Alessandro and Maurizio, and a daughter, Nena. If he was still alive, why had the family not been contacted about a ransom?

“There were rumors going around. They shot him dead in the valley. They made him disappear,” Alessandro recalled. “As a family hearing that, it was devastating. You could not sleep at night.”

Finally, there was contact. The ransom far exceeded what the family possessed. They began the process of appealing to everyone they knew for help.

Antonio Sano wondered if he would survive. “It was a very scary moment,” he said. “You would go to sleep at night hoping the next morning you would wake up sound and safe.”

He constantly thought of Nena, then a toddler. “It’s very difficult, a little girl without her father,” he said. “She was a huge motivation.”

The 36-day ordeal ended with a ransom payment. Sano was released unharmed. The family’s anguish was not over. They had no choice but to flee a country they once loved for an uncertain new beginning.

Sano was relentless in his desire to rebuild his career. He insisted his children capitalize on their opportunities. He overrode Alessandro’s objections in insisting that he attend the University of Florida’s College of Veterinary Medicine. Alessandro, 25, is now grateful for that and is one year away from graduating. His siblings also acclimated well and grew academically.

However Simplification fares in the Kentucky Derby, the Sano’s will be forever grateful for living the American Dream.