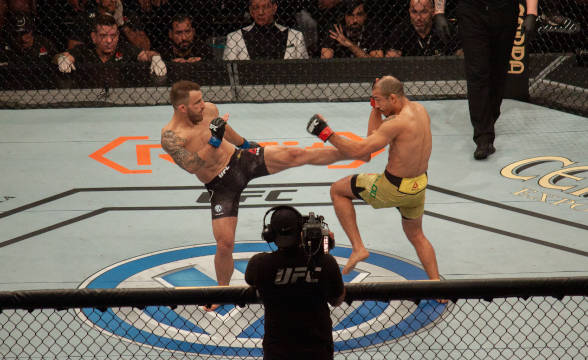 Knowing that Alexander Volkanovski is sitting in the #2 place in the UFC pound-for-pound rankings, it’s no surprise that he’s favored to beat Max Holloway this coming Saturday. If he does it, he’s going to defend his UFC Featherweight Championship title, which he got ahold by beating Holloway back in December 2019.

Just seven months after winning the title, Volkanovski defended it against the same opponent. Fast-forward to July 2, 2022, and the two archrivals meet again. Is it time for Holloway to finally triumph?

All odds are per Bovada as of June 28.

Volkanovski is 12-1 in his professional MMA career, with his only loss happening a long time ago. It happened in 2013 when he was fighting in Australian FC. Since coming to the UFC, the Aussie fighter is undefeated.

Even though most of his wins happened by knockout (12), in recent times, Volkanovski’s fights have been going the distance. In fact, we saw him win seven of his previous 10 UFC fights by decision. This includes both of the fights he fought against Holloway.

Max Holloway to Exact His Revenge?

Holloway is 23-6 in his pro career which started in 2010. Just three years later, he signed a deal with the UFC, which is the promotion in which he’s fought 25 times. All of his career losses happened in the UFC, but to give him credit, they all happened against elite fighters.

In addition to two defeats to Volkanovski, he also lost to Dustin Poirier (twice), Dennis Bermudez, and Conor McGregor. What’s interesting is that five of his six losses happened by decision.

Both fighters tend to fight smart, often taking their fights to the final bell. We expect the same thing to happen on Saturday in Vegas, but which fighter will get the judges’ votes? It’s going to be a close one, but Volkanovski’s record just can’t be ignored. He’s one of the best fighters in the UFC today, meaning that it would be a huge shock if he ended up without his championship belt.