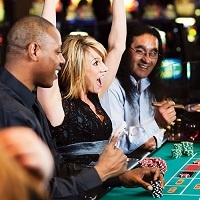 Gambling revenue in the United States is still setting records, despite the troubling economic clouds on the horizon. April of this year was the second best month ever recorded for American gaming, only trailing March of this year when the all-time revenue record was set..

Nearly $5 billion was generated in gambling revenue for April, which was a gain of well over 12% from the year before. Traditional casino gaming accounted for over $4 billion of that total, while online gambling chipped in over $415 million. Sports betting managed to contribute nearly $500 million, which was close to a 75% increase from 2021.

Speaking of sports betting and gambling revenue, it’s now official that wagers on sporting events is one of the fastest growing segments of the industry ever recorded. In fact, since the repeal of the PASPA law just over four years ago, 33 states and the District of Columbia have regulated the activity, bringing the total to 35 and counting.

Not only that, since May of 2018 the American Gaming Association reports that over $125 billion has been gambled on sporting events. That translates to nearly $9 in gambling revenue for sports books, and over $1.3 billion in tax revenue for states.

The benefits of sports betting and the expansion of regulated gambling cannot be confined to operator profits and taxes, however. The sports betting industry, for example, is also responsible for over 300 business partnerships that have been formed between gaming operators, media and marketing companies, as well as professional sports leagues and their teams.

AGA President and CEO, Bill Miller, went on to say that “Now, new partnerships are delivering value for leagues, teams and broadcasters while deepening fan engagement…” He added “It also has served to mainstream the casino gaming industry, generating increased interest from Wall Street, policymakers and media.”

2022-06-11
Previous Post: Mike ‘The Mouth’ Matusow Called out for $50k WSOP Profit Bet
Next Post: Is Vegas Suffering From Legalized Sports Betting in the U.S.? –