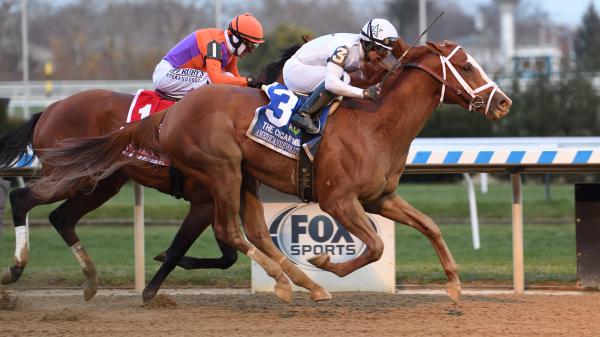 With less than four weeks left in 2021, no one could blame trainer Todd Pletcher for wanting another month or two tacked onto the year.

Especially after the way the seven-time Eclipse Award winner slammed down the curtain on the New York Racing Association’s final three graded stakes of the year.

Pletcher registered a natural hat trick Dec. 4 at Aqueduct Racetrack, reeling off wins in the Grade 2 Remsen Stakes, the Grade 2 Demoiselle Stakes, and then the $750,000 Grade 1 Cigar Mile Handicap Presented by NYRA Bets while adding a highly rare footnote to the sweep.

All three of Pletcher’s winners had to survive an inquiry.

“Definitely not,” the Hall of Fame trainer said with a laugh when asked if that ever happened to him before, “but I didn’t have to sweat (the last one) as much.”

The finale in terms of the wins and inquires came in the featured Cigar Mile when the inquiry sign went up after China Horse Club and WinStar Farm’s New York-bred Americanrevolution crossed the wire first for Pletcher by a half-length. Yet on this occasion, with the foul claim coming from third-place finisher Plainsman and Pletcher the trainer of runner-up Following Sea, he was assured of a third straight trip to the winner’s circle.

“We felt good coming into today. We felt like the horses were training the way you would want them to in a big spot like this,” Pletcher said on a day when all four graded stakes had foul claims that were dismissed. “It’s great to see them all show up and run to their capabilities.”

In joining Mo Donegal (Remsen) and Nest (Demoiselle) as graded stakes winners, Americanrevolution made the biggest splash of as the son of Constitution became a grade 1 winner at 3 and notched a top-level win at a distance quite popular with breeders.

“He’s really a nice horse. He’s showed us right from the start that he’s not just a New York-bred and it’s nice to put this on his resume,” said Elliott Walden, WinStar’s CEO, president and racing manager. “He’s always been a horse that gets better from race-to-race.”

It was Americanrevolution’s previous race that set the stage for Saturday’s breakthrough, initial graded stakes win. After finishing third by 6 ¾ lengths in the Grade 1 Pennsylvania Derby, he returned to the New York-bred ranks and clobbered older rivals by 11 3/4 lengths Oct. 30 in the $300,000 Empire Classic.

Off that eye-opening victory, the 3-year-old son of the Super Saver mare Polly Freeze was sent off as the 5-2 favorite ($7.50), even with Grade 1 Big Ass Fans Breeders’ Cup Dirt Mile runner-up Ginobili and highly regarded graded stakes winners Code of Honor, Independence Hall, and Following Sea in the field of eight.

Rallying from sixth under Luis Saez, Americanrevolution lived up to every bit of that fanfare in winning for the fifth time in seven starts and pushing his earnings to $944,535.

“He’s extremely talented and we’re real excited about him,” said Walden, who added that the Constitution colt bred by Fred Hertrich III and John Fielding would receive a break at WinStar and be pointed to a 2022 campaign that will focus on the middle part of next year.

Fourth in open company behind grade 1 winner Mandaloun in his career debut last year, Americanrevolution was purchased for $275,000 from the Taylor Made Sales Agency consignment at The Saratoga Sale, Fasig-Tipton’s New York sale of select yearlings. He is the second of three foals by Polly Freeze to race and her first stakes winner. She also has a yearling filly by Collected who was consigned by Taylor Made and bought for $210,000 by BDR IV and West Point Thoroughbreds at the Keeneland September Yearling Sale.

Spendthrift Farm’s Following Sea set the pace in the Cigar off a third-place finish in the Grade 1 Qatar Racing Breeders’ Cup Sprint. Ahead by a length after a half-mile in :46.04, the 7-2 second choice was briefly passed by Ginobili at the quarter pole before that one faded to sixth and the son of Runhappy spurted to a length lead at the eighth pole.

Americanrevolution and trainer Brad Cox’s 19-1 shot Plainsman moved up outside of him in the stretch and those two bumped lightly inside the 3/16ths pole before the 3-year-old surged past that rival and grabbed the lead in the final sixteenth of a mile.

“We weren’t 100 percent positive about the mile, but a lot of times good horses do multiple things really well and I think he’s a great example of that. Constitution puts so much determination into his offspring and they’re just like he was: very tough horses and versatile. It’s great to see him get that grade 1 win,” Pletcher said. “The way he ran the mile and an eighth would give you hopes he would be a classic-type horse.”

Following Sea, also a 3-year-old, finished 2 1/2 lengths ahead of Shortleaf Stable’s Plainsman, a son of Flatter, in third.

“I thought he ran great. Johnny (Velazquez) did a super job just letting him find his way up to the lead. He was under pressure most of the way and it looked like Ginobili had put a good neck in front of him and he kept fighting back,” Pletcher said. “He ran a big race.”

While the Cigar provided WinStar with a grade 1 win for one of its runners and popular stallions, it also saw the career of Independence Hall come to an end on a disappointing note.

Owned by Eclipse Thoroughbred Partners, Robert and Kathleen Verratti, Twin Creeks Racing Stables, and WinStar, the grade 2-winning son of Constitution was 2-for-2 at Aqueduct, winning the Grade 3 Nashua Stakes at 2 by 12 1/4 lengths. But on a deep, tiring track Saturday, he never threatened and finished seventh as the 7-2 third choice in his last start before joining his sire as a stallion at WinStar.

“He didn’t handle the track. When he won the Nashua it was much a tighter and faster track,” Walden said. “But we had to try and we look forward to standing him at stud.”

Will Farish’s multiple grade 1 winner and $2.9 million earner Code of Honor was fifth in what may prove to be his final start before becoming a stallion at Lane’s End.