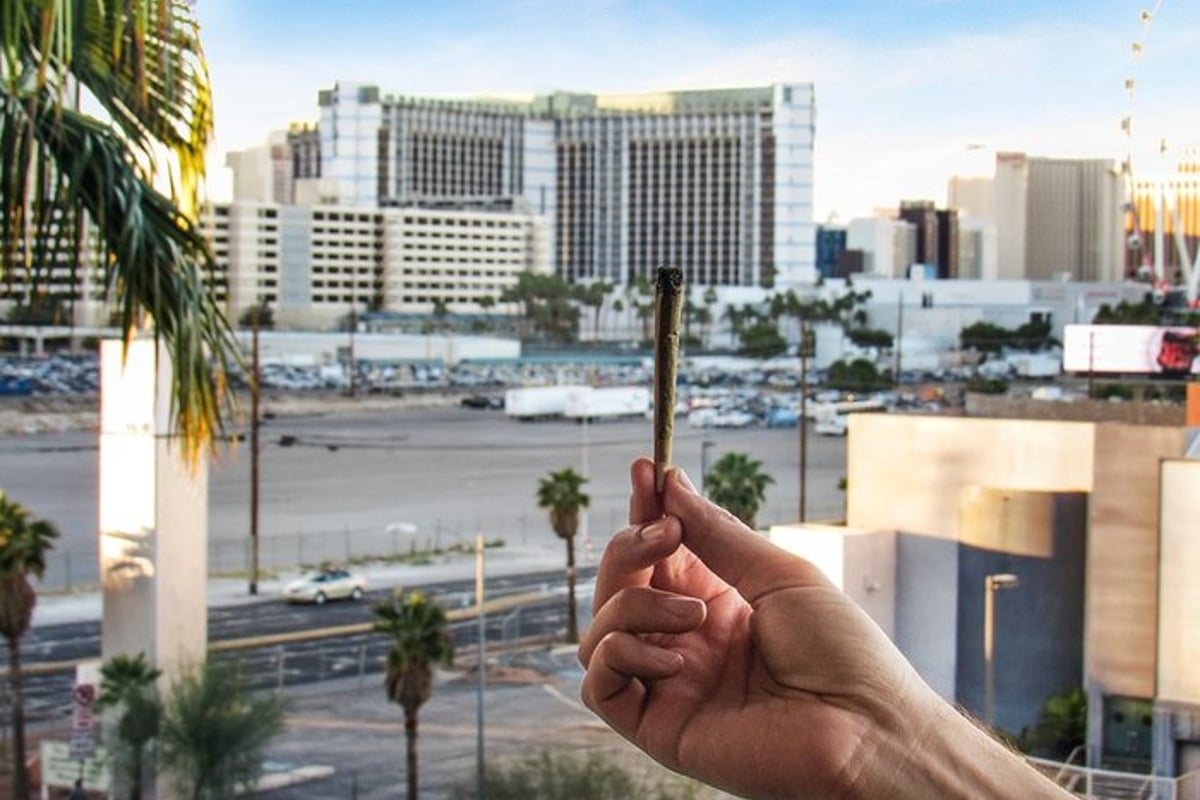 Americans Have Mixed Views on Marijuana, Casinos Do Not

Americans are split when it comes to opinions on how marijuana use impacts society.

A person holds a marijuana joint with the Las Vegas Strip in the background. Americans have opposing views when it comes to deciding whether marijuana has a positive or negative impact on society. (Image: Shutterstock)

An August poll from Gallup found that 49% of US adults believe legal cannabis has a positive impact on society, while 50% say marijuana consumption is much more of a detriment. Thirty-eight states today permit the legal sale of cannabis, whether it be recreational, medicinal, or a combination of both.

Casinos, engaged in another so-called “sin industry” with gambling, must stay clear of the cannabis industry. And that’s becoming increasingly more difficult, as legal marijuana outlets continue to flower across the nation.

Both commercial and tribal casinos are required under federal law to remain distanced from cannabis. That’s because the US Drug Enforcement Administration maintains that marijuana is a Schedule 1 narcotic — the same classification as heroin and LSD. That is defined as having a high potential for abuse and no legitimate medical application.

State gaming laws, paired with federal banking regulations under the Bank Secrecy Act, require commercial casinos to not engage with cannabis businesses or associated people. During the 2014 Bank Secrecy Act Conference in Las Vegas, the feds went so far as to encourage casinos to prohibit individuals who work in the marijuana industry from entering their gaming floors.

Tribal casinos are sometimes offered a bit more regulatory leniency than their commercial counterparts, since the venues operate under sovereign Native American jurisdictions. But that’s not the case when it comes to cannabis.

Class III Indian casinos, the class that allows a tribal casino to operate slot machines and table games, are regulated under the Indian Gaming Regulatory Act (IGRA). Passed in 1988, IGRA set the governing framework to allow federally recognized tribes to assure their economic prosperity by running casino gambling on their sovereign lands.

IGRA allows federal tribes to enter into Class III gaming compacts with their host state. But those compacts must adhere to all “applicable Federal laws and regulations,” IGRA requires.

Federal decriminalization odds remain long, as 60 votes in the US Senate are needed to circumvent a filibuster. Though the US House voted to decriminalize cannabis in April, the “Marijuana Opportunity Reinvestment and Expungement Act” stalled in the Senate.

The Gallup poll found that marijuana support continues to skew Democratic. Most Democrats — 60% — told Gallup they view cannabis favorably. Only 34% of Republicans agreed.

With marijuana legal in some form in more states than not, casinos are closer than ever to an industry that the gaming properties simply cannot touch. It’s become a massive regulatory concern over the past decade, as casino security, dealers, servers, and other customer-facing workers must regularly assess guests for cannabis intoxication.

Anyone who has walked down the Las Vegas Strip recently is well aware that public marijuana use is rampant. Though technically illegal, as Nevada cannabis law limits consumption to private residences and forthcoming regulated marijuana lounges, law enforcement rarely cites an individual for violating the consumption statute.