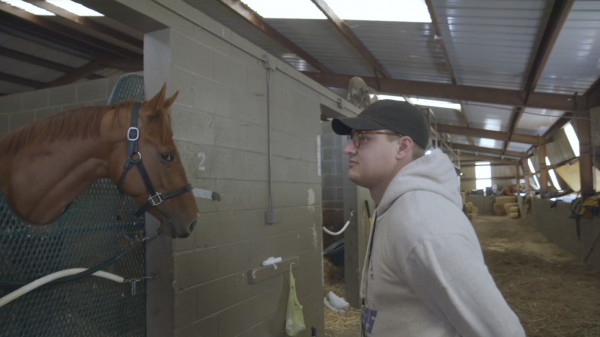 America’s Best Racing today announced the launch of a new initiative, “A Stake in Stardom,” in which two brand ambassadors, TikTok influencer Sarah Cline and former Barstool Sports contributor and impressionist Joey Mulinaro, become partial owners of 3-year-old racehorses in partnership with West Point Thoroughbreds. Designed to immerse both Cline and Mulinaro into the exciting world of elite Thoroughbred racing, “A Stake in Stardom” will offer the brand ambassadors the opportunity to experience the sport and lifestyle of Thoroughbred racing up close and attend major racing events such as the Kentucky Derby, Preakness Stakes, Belmont Stakes, and Breeders’ Cup World Championships.

As part of this initiative, Cline and Mulinaro will receive small, minority ownership stakes for their respective horses, Giant Game and Vinco, during their racing careers from West Point Thoroughbreds. This minority stake will then pay out a percentage of any winnings their respective horses earn during the racing season. To be part of the brand ambassadors’ journeys, fans should check out americasbestracing.net and follow along on the ambassadors’ social channels. Fans can find Sarah Cline on TikTok and Instagram and Joey Mulinaro on Twitter, TikTok, and Instagram.

“This is a tremendous opportunity to reach and attract new fans to racing, enabling them to experience the sport and lifestyle of Thoroughbred racing like never before,” said Stephen B. Panus, president of TJC Media Ventures Inc. “By providing the brand ambassadors with an ownership stake in the racing career of the horses, everyone will have an inside, all-access look into a horse’s preparation, care, and competitions, from stable to starting gate, through the unique lens and perspectives of Sarah Cline and Joey Mulinaro. We’re incredibly grateful to Terry Finley and West Point Thoroughbred for their collaboration with America’s Best Racing and for helping to amplify the message that horse racing is truly a sport for everyone.”

Cline, a New York City-based musical theatre performer, gained a substantial TikTok following of more than 400,000 as one of the main faces of CrownTok, a niche TikTok group of individuals who collect crowns and empower one another to harness their “Queen Energy.” Cline is known for her crown unboxings, which bring attention to female-owned small businesses, as well as her unparalleled sense of style and uplifting messages she shares with her followers. Cline also co-hosted the America’s Best Racing Livestream show from the 2022 Pegasus World Cup at Gulfstream Park in January. For the 2022 season, Cline will join the ownership group at West Point Thoroughbreds as a minority owner in Giant Game, a 3-year-old colt who finished third in the 2021 Breeders’ Cup Juvenile, an early prep race for the following year’s Kentucky Derby. To date, Giant Game has raced five times, with one victory and two third-place showings and earnings of $244,900.

Mulinaro rose to fame with impressions of college football coaches and sports media personalities across social media channels. His impression of Louisiana State University head coach Ed Orgeron made him a favorite of ESPN 104.5 in Baton Rouge, Louisiana. He also regularly posted videos impersonating Alabama head coach Nick Saban, former Indianapolis Colts quarterback Andrew Luck, FS1’s Colin Cowherd, and NBC Sports’ Chris Collingsworth, among others. For the 2022 season, Mulinaro will join forces with West Point as a minority stake holder in Vinco, an eye-catching colt Finley purchased in May 2021 for $1.5 million at the Fasig-Tipton Midlantic 2-year-olds in training sale in Timonium, Maryland. Vinco has raced twice in his career, both starts occurring in 2022, and placed second in his debut at the Fair Grounds in New Orleans. Vinco is trained by Dallas Stewart, who has won the Breeders’ Cup Distaff twice, with Unbridled Elaine (2001) and Forever Unbridled (2017), and the 2006 Kentucky Oaks with Lemons Forever, among more than 900 career victories. Stewart also has finished second twice in both the Kentucky Derby and Preakness Stakes.

Celebrating its 10th anniversary in 2022, America’s Best Racing is the online destination for all things related to the sport and lifestyle of Thoroughbred racing. Through expert content, human and equine interest features, award-winning video content, and wide-reaching programs, America’s Best Racing introduces the love of horse racing to the next generation of fans, turning them into lifelong fans of the sport and lifestyle. For more information about “A Stake in Stardom” and the Road to the Triple Crown visit americasbestracing.net.

About America’s Best Racing: America’s Best Racing is a multimedia fan development and awareness-building platform, initiated by The Jockey Club, designed to increase the profile and visibility of North America’s best Thoroughbred racing events with a primary focus on the sport’s lifestyle and competition. You can follow America’s Best Racing at americasbestracing.net as well as on social media platforms Facebook, Twitter, Pinterest, YouTube, Instagram, and TikTok.