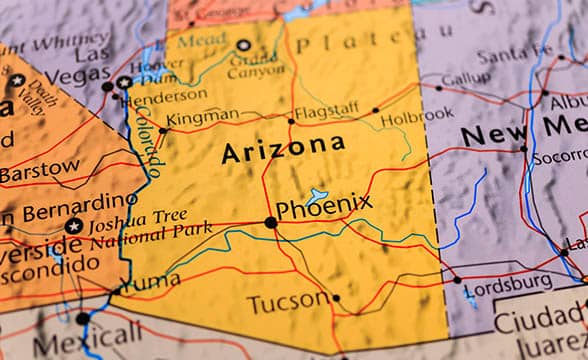 Arizona’s sports betting market is going strong, posting $691 million of handle for March. Ever since wagering on sports was legalized in the state, more and more people have shown interest in betting.

March Was a Strong Month for Arizona

Arizona launched sports betting last September after legalizing it in April. Since then, people have been increasingly interested in taking their sports engagement further and giving wagering a try. Thanks to this, sports betting handle continues to increase as punters collectively bet $691 million in March alone.

This number represents a 40% month-on-month growth compared with February. It should be noted that gamblers won back a substantial part of that money. According to official figures, operators returned $652 million in the form of prizes.

Operators’ gross gaming revenue sat at $37.2 million after the federal tax. The state got $1.86 million thanks to the taxes which is its largest tax income yet. After that, the companies were obliged to provide $18.6 million in free bets to Arizonian citizens, as per the law imposed by Governor Doug Ducey.

A huge majority of sports bets were placed online.

The record-breaking March figures were attributed to big spring tournaments, including the famous March Madness college event. This demonstrated a strong recovery of the sector after a temporary decline in February, caused by the lack of notable sporting events.

For comparison, February’s sports betting handle sat at $24.4 million in GGR before the free bets companies are required to provide. On the same note, the state earned less than half as much as it did in March, with tax revenue sitting at $670,000.

The sports betting sector may be recovering but fantasy sports is on the decline. The sector posted $1.7 million of handle in February, which dropped to $1.3 million. A quarter of the companies that offer fantasy sports had little to no revenue. The rest of them earned less than $150,000 after paying out to the winners. Tax revenue from the sector sat at a measly $4,500.

Overall, Arizona’s sports betting market is evolving but there are some fluctuations every now and then. February’s results were weaker than January’s when the sector earned $563 million but March’s handle surpassed both January’s and February’s.

This placed the Copper State in sixth place in March’s handle ranking. For reference, New York grabs the first place with $1.64 billion, followed by New Jersey with $1.12 billion. Up next are Illinois, Nevada and Pennsylvania with $971 million, $862 million and $715 million respectively.