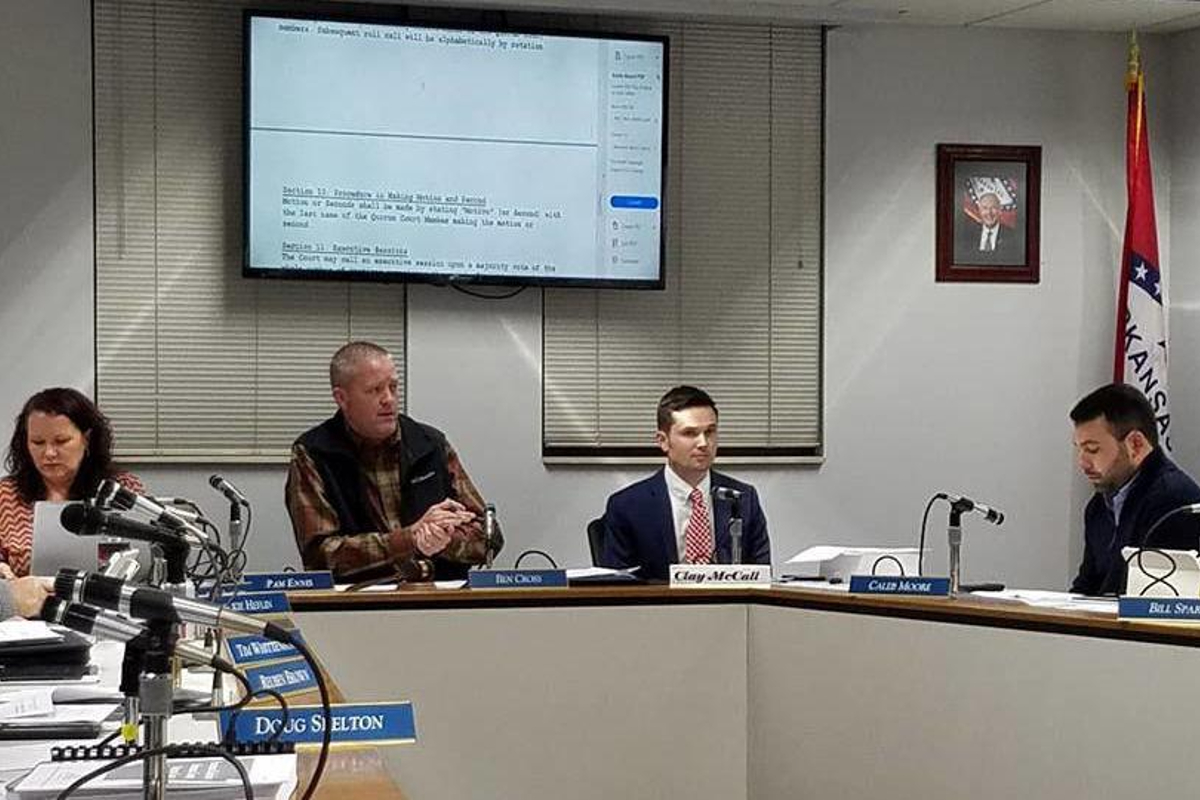 Arkansas lawmakers that backed a 2018 bill to authorize four commercial casinos likely couldn’t have imagined the chaos that has ensued in Pope County.

Members of the Pope County Quorum Court shown at a meeting last summer. The Arkansas county is free to welcome a casino, but legal matters could lead to the region folding on such a development. (Image: Pope County)

More than three years after Pope County was designated as a casino zone, state and local officials are nowhere near issuing a development permit. Two entities — the Cherokee Nation Businesses (CNB) and Gulfside Casino Partnership — continue to claim the legal rights to the county’s lone gaming concession.

The Pope County Quorum Court has an answer for the ongoing quarrel — cancel the casino license entirely. The county’s legislative authority on November 4 passed a resolution by a vote of 7-4 that calls on Pope County Judge Ben Cross to rescind his letter of support for the CNB proposal.

The quorum court resolution is symbolic only, and has no legal authoritative impact. But it nonetheless demonstrates to Judge Cross that the county’s legislative body is also now supportive of annulling its casino candidacy.

During the November 2018 election, Arkansans passed Issue 4. The ballot question amended the state constitution to allow a commercial casino in Pope and Jefferson counties and permit the pari-mutuel racetracks in Garland and Crittenden to transition into full-scale casinos.

The law requires that interested casino operators obtain a letter of support from the local county judge from the area they wish to build in Jefferson and Pope. Jefferson carried out the process seamlessly, the Saracen Casino Resort in Pine Bluff opening last year.

Things have gone much different in Pope.

Gulfside Casino Partnership, an entity controlled by two Mississippi casino riverboat businessmen, submitted a $254 million development pitch called River Valley Casino in 2018. Ed Gibson, then the sitting Pope County judge, lent his approval to the project. But Gibson’s term as county judge expired at the end of that year.

When the Arkansas Racing Commission (ARC) formally opened up the bidding the following year, CNB presented a $225 million concept, and it came with current Pope County Judge Ben Cross’ endorsement.

ARC tried to settle which project should be issued the gaming permit, but found controversy when one of its commissioners was deemed to have had bias in his review of the two bids. Courts subsequently intervened, with the Arkansas Supreme Court ruling last month that only the CNB plan qualifies.

The state’s highest court reasoned that the 2018 gaming question specified that a casino blueprint must be accompanied with the current sitting judge’s consent. Since Gulfside’s scheme came with a former judge, the Supreme Court rendered it ineligible.

The 2018 ballot initiative was led by CNB and the Downstream Development Authority of the Quapaw Tribe, which officials in Jefferson County partnered with for the Saracen Casino. Together, CNB and Downstream, two tribal-owned companies, spent more than $6.25 million on the campaign.

However, since Pope was written into the 2018 referendum, the only way to prohibit casino gambling in the county is to pass yet another referendum to again amend the constitution. A committee called “Fair Play for Arkansas 2022” is collecting signatures in hopes of accomplishing that next year.

In 2018, out-of-state casino developers wrote Pope County into a statewide ballot initiative to legalize casino gambling in just four counties in Arkansas — without any input from Pope County citizens,” Fair Play said in a statement. “Unfortunately, a new amendment is the only way Pope County can be removed from our constitution. We deserve what 71 other counties in Arkansas enjoy: the freedom to live without a controversial gambling development forced on us.”